Is the West’s Dry Spell Really a Megadrought?

SAN FRANCISCO — The drought that has been afflicting most of the Western states for the past 13 years may be a “megadrought,” and the likelihood is high that this century could see a multi-decade dry spell like nothing else seen over the past 1,000 years, according to research presented at the American Geophysical Union Fall Meeting on Wednesday and Thursday.

Today, drought or abnormally dry conditions are affecting every state west of the Mississippi River and many on the East Coast, with much of the Southwest under long-term severe, extreme or exceptional drought conditions. While drought conditions nationwide are down this year, they remain entrenched in the West. 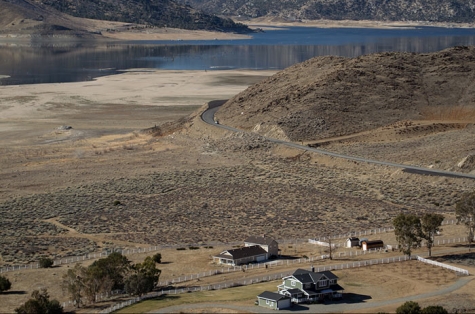 Since 2000, the West has seen landscape-level changes to its forests as giant wildfires have swept through the Rockies and the Sierra Nevada, bark beetles have altered the ecology of forests by killing countless trees and western cities have begun to come to terms with water shortages made worse by these changes as future snowpack and rainfall becomes less and less certain in a changing climate.

“The current drought could be classified as a megadrought — 13 years running,” paleoclimatologist Edward Cook, director of the Tree Ring Laboratory at Columbia University’s Lamont-Doherty Earth Observatory in Palisades, N.Y., said at an AGU presentation Wednesday night. “There’s no indication it’ll be getting any better in the near term.”

But the long period of drought the West is currently experiencing may not be a product of human-caused climate change, and could be natural, he said.

“It’s tempting to blame radiative forcing of climate as the cause of megadrought,” Cook said. “That would be premature. Why? There’s a lot of variability in the system that still can’t be separated cleanly from CO2 forcing on climate. Natural variability still has a tremendous impact on the climate system.”

Tree ring data show that decades-long droughts have occurred before humans started emitting greenhouse gases that fuel climate change. Long-lasting drought events have been tied to fluctuations in ocean conditions, which can alter large-scale weather patterns. For example, when the tropical Pacific Ocean is cooler than average, but the Atlantic Ocean is unusually mild — as has been the case during the past several years — there is a higher risk of drought in parts of the West and Central U.S.

The area of the West that was affected by severe drought in the Medieval period was much higher and much longer than the current drought, tree ring data show.

It is “indeed pretty scary,” Cook said. “One lasted 29 years. One lasted 28 years. They span the entire continental United States.”

Two megadroughts in the Sierra Nevada of California lasted between 100 and 200 years.

Cook is among the first to suggest that the current drought in the West is a megadrought, which is typically defined as a widespread drought lasting for two decades or longer, Cornell University assistant professor of earth and atmospheric sciences Toby Ault said during an AGU presentation Thursday.

But the idea that the current 13-year dry spell will be of similar magnitude of the megadroughts found in tree ring records is subject of debate.

“Are we in a megadrought? I guess we are,” Ault said. “They are a threat to civilization in the future.”

Ault is studying the probability that the U.S. will experience a megadrought this century on the order of no other dry period seen here at any time in the last millennium.

“That’s not the whole picture because we’re going to see climate change in this century,” he said.

The bottom line: “The picture looks like we’re going to have to take this seriously,” Ault said.

Such dry spells would have severe implications for the nation’s water supply, and the U.S. is going to have to adapt and find smarter ways to cope, he said.

The current drought is occurring at a time of sweeping and abrupt changes in the nation’s forests as a result of both the extended dry period and human-caused climate change, said Lisa Graumlich, dean of the College of the Environment at the University of Washington.

Speaking at AGU on Wednesday, Graumlich said vast ecosystem changes are happening at an unprecedented scale across the country as tree mortality in Western forests is increasing dramatically, partly because bark beetles are spreading widely as summer warm seasons are longer than before.

“The time in which forests are burning in the West is much longer than it was in previous decades,” she said. “Forest insects are erupting across the West.”

Those changes and others including loss of sea ice, longer growing seasons in the Arctic, tundra being replaced by forests and shrubs, are occurring across an area scientists haven’t seen before, she said.