Will ExxonMobil, Peabody Energy and the world’s 43 other largest fossil fuel companies be able to thrive in a business climate heavily affected by global warming?

That’s a question a coalition of investors, led by the sustainable business advocacy group Ceres, is asking those companies, demanding to know if they can be viable if markets or government-imposed mandates prevent them from burning all of their proven carbon reserves. 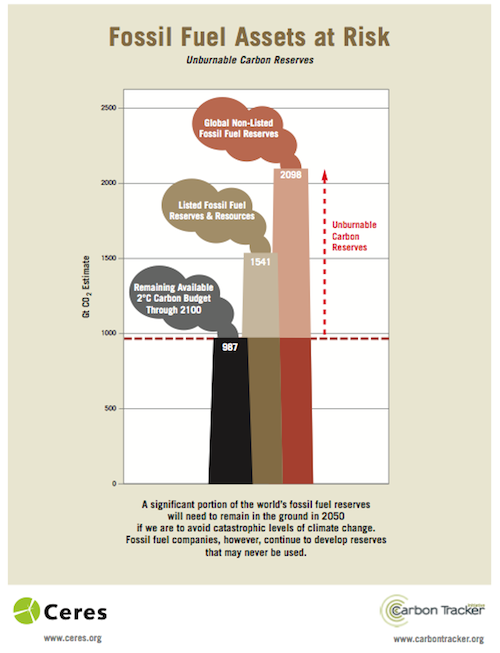 “Investors are asking fossil fuels companies, what is your plan B?” said Ceres president Mindy Lubber during a conference call with reporters on Thursday. “If you’re unable to use major portions of your fossil fuels reserves, where do you go?”

The idea that ExxonMobil, for example, won’t be able to burn all its oil, or Peabody Energy won’t be able to mine and burn all its coal reserves, comes from the Intergovernmental Panel on Climate Change and the International Energy Agency’s suggestions that an effective way to limit global warming to 2°C is for nations to set a carbon budget that demands significant portions — possibly two-thirds — of proven fossil fuel reserves to be left unmined and unburned.

The group Carbon Tracker and the Grantham Research Institute on Climate Change and Environment released a study this year calling for governments and investors to consider how a carbon budget would impact corporate business models and suggested that up to 80 percent of the globe’s proven reserves of coal, oil and natural gas would have to stay in the ground to limit global warming to 2°C.

A group of investors, including two large California pension funds, the New York State and New York City comptrollers, F&C Asset Management and others, have sent letters to the 45 largest fossil fuels companies asking that they inform investors about what risks the companies face as pollution and energy efficiency standards are ramped up and demand for fossil fuels declines.

“Investors like CalSTRS have a deep interest in the long-term financial health of this sector,” said Jack Ehnes, CEO of the California State Teachers Retirement System. “It underpins the rest of the economy. We’re concerned fossil fuel companies are headed down a path that is unsustainable. We’re concerned that fossil fuel companies we own are pursuing long-term business plans that depend on the world not taking climate change seriously.”

Ehnes singled-out ExxonMobil for having a business plan that relies on the future that looks like the present — a future scientists warn that will be disastrous if carbon emissions continue on their present course globally, he said.

Ehnes said it’s critical for investors to engage with companies to make them more sustainable.

“The path to getting to a better place comes from working through those business strategies and finding out why companies have chosen the path they’re on, not from stepping away from the company,” he said. “If we’re serious about creating change, it can only come from an active conversation, not running to the exit.”

Mark Fulton, of the Carbon Tracker Initiative, said of the 45 companies that received the letters, 30 have responded, and most are willing to engage in a discussion about how they’ll be affected by climate change and what they’ll do if they find themselves with unburnable and unextractable assets.

Only a few of those companies have said they don’t think it’s necessary to alter their business plans to adapt to climate change, he said. Detailed responses from the companies are expected to roll in the coming months, Fulton said.