Zinke said climate change is not the hoax Trump has said it is, but he falsely claimed the science around it is uncertain, and said that federal energy policy, which determines how the Interior Department manages energy and public land, should heavily favor coal. 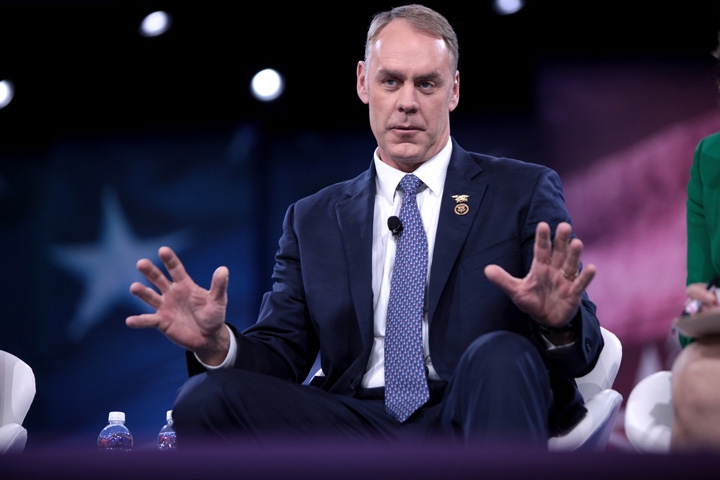 If confirmed, Zinke, a second-term congressman from Montana and former Navy SEAL, would oversee all the nation’s national parks and more than 500 million acres of federal public lands, mostly in the West. He would be responsible for all the coal mining, fracking and oil drilling on public lands and waters off of all U.S. coastlines, and for permitting all new offshore wind power development.

Trump vowed during his campaign to breathe new life into America’s coal industry, which he said has been hit too hard by environmental and climate regulations. In reality, coal is in decline mainly because of cheap natural gas, which electric power companies are beginning to use more than coal to generate electricity.

“The war on coal, I believe, is real,” Zinke said. “All-of-the-above is the correct (energy) policy. Coal is a great part of that energy mix. I’m also a great believer that we should invest in research and development on coal — because we know we have the asset — to make it cleaner and better. We should lead the world in clean energy technology.”

Coal is the world’s largest single source of carbon pollution driving climate change. To make it “clean,” all the carbon pollution from coal-fired power plants would have to be captured and stored permanently, preventing it from ever reaching the atmosphere. That technology is in its infancy, and it is unnecessary if other energy sources such as wind, solar and natural gas are used to generate electricity.

But given Zinke’s statements Tuesday, renewables seem likely to be shunted aside for more fossil fuels. Zinke said he’d revisit the Obama administration policy closing most of the Arctic Ocean off the north coast of Alaska to oil drilling. He said he’d also reexamine an Obama moratorium on coal development on federal lands, which was put in place a year ago while the government studies the climate impacts of coal development.

Throughout the hearing, Zinke questioned the science showing that climate change is driven by burning fossil fuels, that it could bring about water scarcity, influence the spread of catastrophic wildfire, and melt glaciers in the national parks he would oversee.

“The climate is changing,” Zinke said, adding that he believes that because he watched Glacier National Park’s Grinnell Glacier melt while he ate lunch there one day. “Man has had an influence. That is undisputable as well. Where there is debate is what that influence is and what we can do about it.”

Blackfoot Glacier and Jackson Glacier in 1914 and 2009. They used to be joined as a single glacier but are now split in two because global warming has melted the ice away.
Credit: E.C. Stebinger/Glacier National Park (left). Lisa McKeon/U.S. Geological Survey (right).

He said the U.S. Geological Survey, a scientific agency in the Interior Department, should do “objective” climate science to help clear up the debate.

“Actually, there is no debate,” U.S. Sen. Bernie Sanders, I-Vt., said. The overwhelming majority of the world’s scientists agree that greenhouse gas emissions from burning fossil fuels for electricity and transportation are the main cause of climate change.

Zinke hesitated several times to mention renewables as part of his “all of the above” energy strategy for public lands — a term often used by politicians to signify that they favor coal, oil, gas and renewables development instead of focusing primarily on renewables to address climate change and other environmental challenges.

“I’m a strong supporter of research and development for different technologies for a complete spectrum of energy — to include traditional sources to make sure we’re better at doing that,” he said when asked what he means by “all of the above.”

Federal public lands are a major source of energy in the U.S., with about 40 percent of America’s coal mined from them and about 20 percent of the country’s oil and gas drilled on them.

In the Obama administration, the Interior Department has played a major role in implementing the White House’s plans to cut greenhouse gases and uphold America’s part of the Paris Climate Agreement, which aims to keep global warming from exceeding 2°C (3.6°F) — a level of warming climate scientists consider dangerous for humanity.

Through the Interior Department, the Obama administration blocked oil development off of much the Atlantic and Arctic coastlines, placed a moratorium on new coal leasing, created vast new national monuments that protect land and prevent energy development within their borders, and he designated tracts of public land just for wind and solar energy development.

Zinke suggested his Interior Department would pivot toward allowing states to have more say over what happens on federal land while “restoring” the trust of some Westerners who are disenchanted with federal lands policies that protect the environment. As part of that, Zinke said he would focus on cutting forests for timber and developing land for oil, gas and coal.

Fixing crumbling roads, bridges, trails and other infrastructure in national parks would be another major priority, he said.

Zinke emphasized his love for public lands and the need to keep them open to public access.

But when Sen. Martin Heinrich, D-N.M., asked why Zinke voted for a U.S. House rules change that would make it easier for the federal government to sell off public lands, Zinke said he was responding to a sense of anger among some Westerners that the federal government isn’t listening to them when it implements restrictive environmental policies.

“It was an indicator of how upset people are about our land policy at the moment,” he said. “It’s a shot across the bow that you have to do something.”

Yet, he said he opposes a movement in some Western states and within the Republican party to reduce the amount of land the federal government manages by transferring it to states willing to take it.

“I want to be clear on this point: I am absolutely against the transfer or sale of public land,” he said. “I cannot be more clear.”