Thursday marked the 40th anniversary of one of the most destructive tornado outbreaks in U.S. history. The event, deemed a Super Outbreak, took place over two days and spawned nearly 150 tornadoes across 13 states and the Canadian province of Ontario. The storm left behind millions of dollars in damage and caused 300 deaths and 6,000 injuries. The only outbreak with more tornadoes occurred in late April 2011. 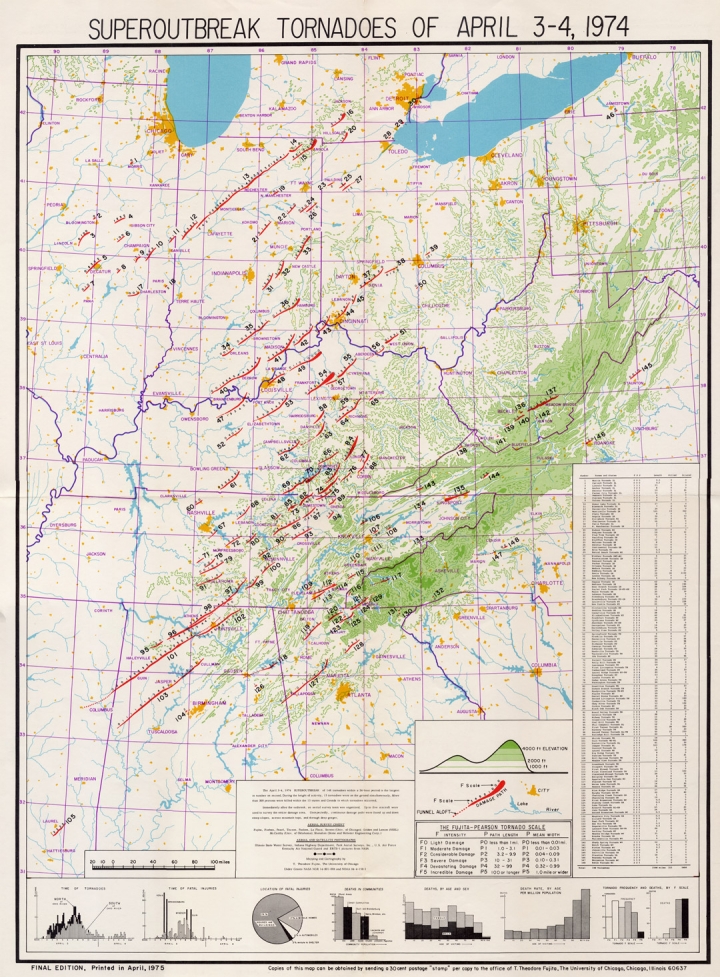 The map above shows the meticulous detail that went into analyzing the 1974 Super Outbreak by Ted Fujita, who devised the Fujita Scale to quantify the strength of tornadoes. Without computers, Fujita had to hand draw each tornado track and width after doing extensive aerial surveys. The National Weather Service's Wilmington office has a large version well worth looking at if you don't mind the load time.

As shocking as the geographic scope of the outbreak is the number of intense tornadoes it spawned. Of the 148 tornadoes that touched down, 30 were rated F4 or F5, the two most destructive categories. According to U.S. Tornadoes, the U.S. only sees 7 such tornadoes per year, underscoring just how violent the outbreak was.

There was a small silver lining in the aftermath, outlined in a story by the University Corporation for Atmospheric Research’s Bob Henson. During his aerial surveys, Fujita discovered a previously unknown weather phenomenon. Among the wreckage, he noticed not all the damage was consistent with tornado winds, which tend to swirl. Instead, there were areas that were flattened like a rolling pin had gone wild. Further research of this and other similar events found previously unidentified microbursts—intense downward pulses of air that can disrupt air travel in addition to flattening trees and homes—as the culprit.

The results have led to aviation safety improvements. “It’s likely that hundreds of deaths have been avoided thanks to Ted Fujita’s uncommon insight, his exhaustive documentation, and the careful field work carried out by NCAR scientists and their collaborators,” Henson wrote.

Tornado prediction has also dramatically improved. To illustrate some of those advancements, the Storm Prediction Center used observations of conditions that preceded the 1974 storm and ran computer models on Wednesday to see how well they could forecast the outbreak if it happened today. It turns out the models were able to identify conditions that were conducive for tornadoes to develop in a number of locations where twisters did touch down in 1974.

That forecast skill come from decades of technological upgrades since the Super Outbreak, including Doppler radar technology and powerful computers  that can crunch exponentially more calculations than their 1974 brethren. And those upgrades are extremely helpful on a day like Thursday when nearly 52 million people are at risk from severe weather according to the National Oceanic and Atmospheric Administration.