Indonesia is in the grips of a double-headed climate and public health crisis as fires rage across the country. On Monday, the fires reached such a fever pitch that Indonesian Prime Minister Joko Widodo cut a trip to the U.S. short to return home and deal with the inferno that’s turning air toxic and putting more carbon dioxide in the atmosphere than the U.S. on a daily basis.

Nearly 116,000 fires have been documented and air quality in Indonesia and its neighboring countries has suffered. The fires are a yearly occurrence, but this year is already the second-most prolific burn year on record and dry conditions driven by this year’s strong El Niño mean it still has a shot at the top spot.

“We are definitely looking at an extended fires season this year, perhaps rivaling 1997, with our current forecasts continuing the strong tilt toward dry (conditions),” Andrew Robertson, a climate scientist at the International Research Institute for Climate and Society (IRI), said.

Robertson and others at IRI have developed fire forecasting tools for the Indonesian government to pinpoint outbreaks and plan a season ahead. The longer the fires burn, the harder they are to put out (and they could smolder through the rainy season).

That means the fires are contributing to the long-term climate crisis, but they’re also driving huge public health and economic woes for the region in the here and now. Schools, flights and outdoor events have been canceled in Indonesia, Singapore and Malaysia as the smoke permeates daily existence. As many as 500,000 people have reported haze-related illnesses, according to the Guardian.

The Indonesian government is combating the fires with help from Australia and other countries in the region and costs are expected to run in the billions. However, fighting fires doesn’t address the recurring issue for a country where nearly 40 percent of its population works in agriculture.

“Fighting Indonesia’s peatland fires is expected to exceed $14 billion this season and is only a short-term solution to a long term crisis,” Fred Stolle, a research at World Resources Institute, said. 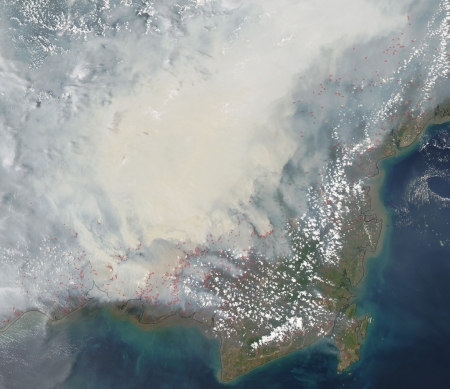 Farmers generally use fire — often illegally — to clear land for agricultural use ahead of the rainy season. In a regular year, they can cause widespread air pollution in Indonesia and across the region. But El Niño is helping enforce dry conditions and slow the arrival of the rainy season.

This year’s efforts to control fires is a band-aid on the longer term issue of stopping fires before they start and restoring peatlands so that they keep their massive stores of carbon sequestered in the ground rather than in the atmosphere.

Stolle and others at World Resources Institute have recommended improved land management techniques and providing farmers with tools and skills necessary to clear land without using fire.

Miriam Marlier, a postdoctoral researcher at Columbia University who has studied this and past fire outbreaks in the region, said satellite data can also help scientists and policymakers target upwind and downwind locations to understand both the health impacts as well as the fire hot spots.

“By identifying the locations that contribute most to exposure downwind of the fires, we can help to target the areas that should be the focus of fire prevention and fire fighting resources,” she said.

While this year’s fires could dwindle when the rainy season finally arrives next month, it’s possible it could only be a respite and not a full reprieve. Robert Field, a research scientist at NASA Goddard Institute for Space Studies, warned that the region generally sees another short dry spell in February and with El Niño likely to still be in place then, it could mean a smoky start to the year.

You May Also Like:
Warming May Mean Stifling Future for Middle East
Why Today Is a Critical Moment for the Clean Power Plan
Pulp Fiction, The Series