It’s about as sure a bet as you can make: 2015 is going to be the hottest year on record.

Month after month this year, above-average — and sometimes record — global temperatures have piled up, raising the odds that this year will be the hottest one humanity has ever experienced. And now October has blown those records out of the water. 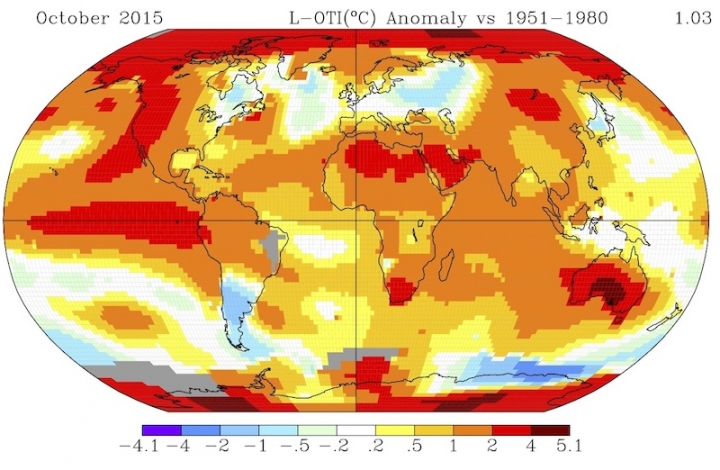 According to newly released NASA data, October was not only the warmest October on record, but had the biggest temperature difference of any month in the 135 years of NASA’s archive. The month was more than a full degree Celsius (nearly 2°F) above the average for the 1951-1980 base period that NASA uses — an unprecedented feat in all those years of data.

The global average temperature for the year so far gives 2015 a 99.9 percent chance that 2015 will best 2014 as the warmest year in the books, according to Gavin Schmidt, director of NASA’s Goddard Institute for Space Studies, which keeps the temperature records. The virtually assured record is a mark of the steady upward march of global temperatures thanks to the accumulation of greenhouses gases in the atmosphere, as well as a very strong El Niño.

Probability that 2015 will be a record warm year now 99.9% based on Jan-Oct GISTEMP data. pic.twitter.com/glfKYAha3X

That news comes amid a flurry of other climate milestones: The year is likely to finish with global temperatures at about 1°C above preindustrial levels, halfway past the stated international goal of limiting temperature rise to no more than 2°C from that baseline. International climate talks are scheduled to begin later this month in Paris to hammer out an agreement toward that goal.

Carbon dioxide levels are also currently drifting back above 400 parts per million, possibly never to dip back down again for the foreseeable future as a strong El Niño event lends the buildup of the greenhouse gas an extra push.

El Niño is a major factor in this year’s considerable heat. The event is expected to be one of the three strongest on record. In fact, by one measure, it has already entered the record books, as ocean temperatures in a key region of the Pacific Ocean climbed above those of the blockbuster 1997-1998 event.

That steady warming has overall tipped the odds toward record heat; in fact, the last time there was a globally record cold year was 1911. In contrast, 13 of the 15 hottest years on record have occurred since 2000.

With that overall trend, it was only a matter of time before a month saw a temperature departure greater than 1°C, Schmidt said in an email, adding that it will likely happen more moving forward.