With Arctic sea ice thinning and shrinking rapidly in recent years, the U.S. military and scientific agencies are scrambling to cope with the looming prospect of a seasonally ice-free Arctic Ocean.

At a meeting in Washington last week, top U.S. Arctic officials at the Coast Guard, Navy, the National Oceanic and Atmospheric Administration (NOAA), and other agencies acknowledged that the U.S. lags behind other nations in dealing with the rapidly changing Arctic environment. The agencies are facing serious deficiencies in the ability to map the sea floor and develop enforceable environmental policies, as well as construct onshore infrastructure that would be used for search and rescue and oil recovery operations. Currently, not a single Navy surface ship is even capable of navigating the ice-covered waters. 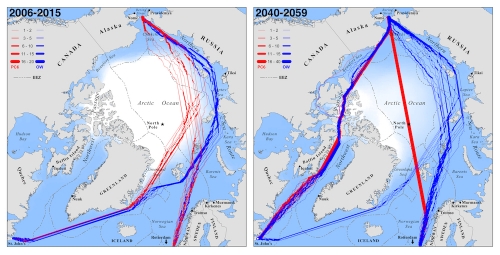 There is also a big void in diplomacy, and how the U.S. will deal with other countries on issues involving the Arctic.

The U.S. has not ratified the United Nations agreement that irons out how countries make claims to offshore Arctic resources. That’s despite the agreement having the overwhelming support of the military and both political parties.

Ratification of the treaty, which is known as the U.N. Convention on the Law of the Sea or UNCLOS, has been a top priority for national security officials for several years, but it remains stalled in the Senate due to a handful of senators’ concerns that it would compromise U.S. sovereignty.

The sweeping changes taking place in the Arctic are only just beginning to force policy discussions and strategies in the U.S. and among the eight Arctic states. On land, spring snow cover has been plummeting in recent years, permafrost has been melting, and average surface temperatures have been rocketing upward at twice the rate seen in most other regions of the world. At the same time, the Arctic Ocean’s sea ice cover that has existed year-round for all of modern human history is swiftly transitioning into a seasonally open ocean.

In the past two weeks alone, Arctic sea ice extent has plummeted from the 11th-smallest on record for this time of year, to the fifth-smallest, due to a stretch of favorable melting conditions. Compared to the 1981 to 2010 average, sea ice extent on July 15 was 409,000 square miles below average, according to the National Snow and Ice Data Center (NSIDC).

During the first two weeks of July, ice extent declined at a rate of 51,000 square miles per day, which was 61 percent faster than the average rate of decline over the period 1981 to 2010, NSIDC said.

Last year, Arctic sea ice extent declined to the smallest ever observed in the satellite era, and studies have indicated that it was very likely the smallest extent on record, based on observations taken by Cold War-era submarine cruises under the Arctic ice pack.

Accompanying the swift environmental changes has been an unprecedented increase in human activities in the Arctic, and these have prompted Arctic states, working through the Arctic Council, to strike cooperative agreements on matters such as conducting search-and-rescue operations as well as responding to oil spills. The eight member states are: Canada, Denmark, Finland, Iceland, Norway, Russia, Sweden, and the U.S. 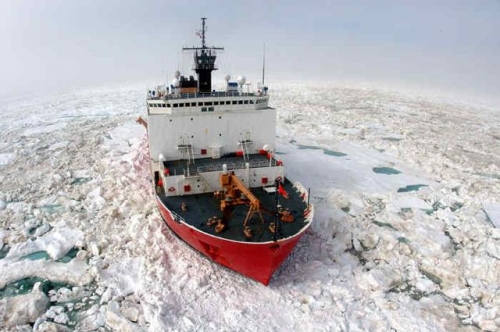 U.S. Coast Guard Icebreaker Healy, which is one of only two icebreakers that the U.S. currently operates.
Credit: Coast Guard.

The rapid decline of summer sea ice cover has permitted some shipping companies to take advantage of shorter shipping routes, primarily along the so-called Northern Sea Route straddling the northern coast of Russia, although some transpolar shipping has taken place as well.

According to Alaska Republican Senator Lisa Murkowski, who addressed the conference on Tuesday, Northern Sea Route transits have jumped from 0 in 2007 to 46 in 2012. Last year’s shipping activity had an international flavor, with vessels flying the flags of Panama, Liberia, and the Marshall Islands making the trip. “These numbers show the Arctic is truly becoming part of a shipping network,” she said.

The Coast Guard has reported that there was a 118 percent increase in maritime transit through the Bering Strait between 2008 to 2012, and 1 million tons of cargo trans-shipped in 2012.

Yet, in the face of increased Arctic shipping, Murkowski said, the U.S. lacks shoreline infrastructure, such as a deepwater port with easy access to the Arctic, that could serve as a supply hub, something she’s stumping for constructing in her home state. “We are woefully behind in our infrastructure,” Murkowski said.

The closest U.S. deepwater port to the Bering Strait and Arctic lies in Dutch Harbor, Alaska. That is 1,100 nautical miles from Barrow, which lies above the Arctic Circle and is in close proximity to offshore drilling operations.

Speaking at the conference, Navy and Coast Guard officials said assessments are underway to determine how to bolster their capabilities for operating in the region, especially as oil companies, such as Shell, have proceeded with Arctic exploratory drilling operations — with nearly disastrous results last year, when the Shell Oil drilling rig Kulluck ran aground in stormy weather.

Early steps include the Navy currently updating its 2009 Arctic roadmap, and the Coast Guard as well as the White House recently releasing new Arctic strategy documents to guide long-term planning. The Coast Guard also held an Arctic exercise in 2012 to test its readiness for conducting operations in the region. Scientists at NOAA are also seeking funding for more observation stations in the Arctic to improve their ability to forecast changes in sea ice cover.

“It’s natural that we have paid less attention than other nations,” said Vice Admiral Peter Neffenger, Coast Guard Deputy Commandant for Operations. “For many years, the U.S., the people of the U.S., viewed itself as a nation with an Arctic state rather than an Arctic nation,” he told reporters. “I think that we've discovered that we're an Arctic nation as activity has increased off of our coast.”

“We only look late in relation to those who have already been up there operating,” he said, mentioning that Russia has been much more active in the Arctic because it has a larger Arctic coastline.

“We know more about the Caribbean than Russia does, though,” said Rear Admiral Jonathan White, Oceanographer of the U.S. Navy.

There have been $3.7 billion in commercial investments in offshore oil and gas leases in the Chukchi and Beaufort Seas off of Alaska since 2005, according to the Coast Guard, and it is estimated that 30 percent of the world’s undiscovered natural gas resources lie in the circum-Arctic and outer continental shelf area. 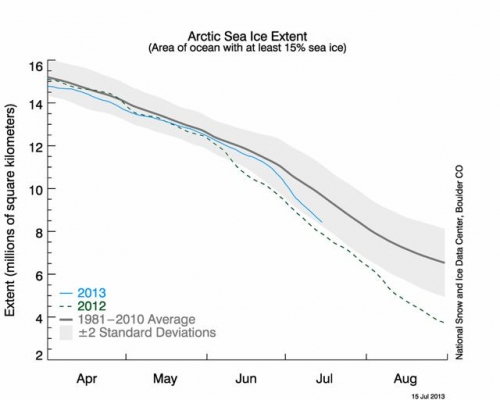 Arctic sea ice extent as of July 15, along with daily ice extent data for 2012, the record low year.  2013 is shown in blue, and 2012 in green. The gray area around the average line shows the two standard deviation range of the data.
Credit: NSIDC.

Yet much of America’s Arctic waters remain unmapped, and NOAA, which is responsible for charting U.S. waters, lacks the capabilities to map such a vast area alone, making partnerships a vital part of the country’s approach to Arctic resource management.

“I would say that the commercial activity is driving the governments to get together,” Neffenger said. “We don’t know a lot about recovering oil in sea ice,” he said. “It’s a very different type of oil that you tend to find in the Gulf of Mexico, for example.”

According to acting NOAA administrator Kathryn Sullivan, there are more than 200,000 square miles in America’s Exclusive Economic Zone in the Arctic. Yet NOAA can only map about 500 square miles of sea floor per year.

Rear Admiral White said that trying to use one NOAA ship to map all of U.S. Arctic waters is “like trying to map the floor of a room with just one ant.” He said reliable charts of the Arctic exist mainly for shallow waters, not for deepwater operations.

He said NOAA's and the Navy’s approach to the Arctic emphasizes leveraging partnerships with other federal agencies and international partners.

“In terms of the Navy, the Arctic and the diminishing ice represents a challenge but not a crisis,” White said.

White said that the U.S. is now acting more aggressively to research the Arctic region and prepare for increased operations, despite the many obstacles, including Pentagon budget cuts.

“Let's not forget to take credit for what we do in the Arctic today,” White said. “The Coast Guard is up there today, the Navy is up there, under the sea and the air . . . we have all kinds of stuff going on to understand the Arctic better.

White and others said the U.S. needs to ratify UNCLOS by 2015, when the U.S. takes over the rotating two-year chairmanship of the Arctic Council. Otherwise, he said, the country will speak with a weaker voice as Council president, since the U.S. is the only Arctic Council member nation that has not ratified the treaty. Such a scenario would be “sort of like driving a bus without a driver’s license,” he said.

Senator Murkowski, and fellow Alaskan, Sen. Mark Begich (D), who also addressed the conference, said they hope to try again to get the treaty through the Senate in the coming year, but that there is still some stubborn Senate opposition to it.