On the thirsty rangelands of Arizona and New Mexico, which have been mired in an on-again, off-again drought since 1999, ranchers and water managers are hoping for an unusually wet summer monsoon season that will help make up for this winter’s lackluster snowpack. Reservoirs have been depleted to near-record lows, and the major rivers and tributaries are running at barely a trickle, making the summer rainfall season crucial to avert potentially severe water shortages, at least temporarily. 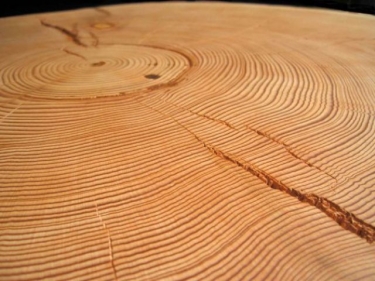 This cross-section of Douglas-fir from Arizona shows the tree's annual growth rings. Tree rings like this can be used as a proxy record for the climate.
Credit: Daniel Griffin/University of Arizona.

However, if the past two summer monsoon seasons are any guide to what’s ahead, meaningful drought relief may be wishful thinking.

“Another dry monsoon could be devastating,” said Victor Murphy, a climate services program manager with the National Weather Service.

Due in part to far below average river runoff from a thin mountain snowpack, which had all but vanished from the Southwest by mid-April, water rights and water allocation disputes have already begun to flare up along the Rio Grande and Pecos rivers.

In New Mexico, the 30-month period ending in March 2013 was the driest on record, and reservoir and river levels are reflecting this shortfall. The Brantley Reservoir on the Pecos River in southeastern New Mexico is at just 1 percent of capacity; and the combined storage in the four reservoirs on the Pecos River is at 25 percent, according to the latest U.S. Drought Monitor, released on May 9.

The Elephant Butte Reservoir in New Mexico’s “Chile Belt” is at 10 percent of capacity, with the lowest amount of water available for irrigation in the region in almost 100 years.

Water managers across the state are sharply reducing supplies for irrigating farms and other uses. About 40 percent of the state is currently mired in “exceptional drought” conditions, the most severe category listed on the U.S. Drought Monitor. The drought is likely to intensify and expand throughout May and June, which are typically dry and hot months in this region, before any appreciable mid-to-late summer rains arrive.

In recent years, the month of June has been trending progressively hotter, which is consistent with climate change projections, according to Jonathan Overpeck, co-director of the Institute of the Environment at the University of Arizona.

Scientists say there is no reliable way of predicting the summer monsoon, which typically brings showers and thunderstorms into Arizona and New Mexico beginning in mid-July and lasting until September. In a typical year, the months of July, August, and September are the three wettest consecutive months in New Mexico. However, the past two monsoon seasons have been below average, with the 2011 monsoon season coming in as the 14th-driest on record in New Mexico, and the 2012 season as the ninth-driest.

This year, with a thin spring snowpack already leading to scant summer runoff from the mountains, the stakes for the summer monsoon couldn’t be higher.

Unlike other short-term climate cycles and the annual monsoon in South Asia, the Southwest Monsoon has defied most attempts to predict it accurately. “It is still not possible to predict with any confidence what the monsoon will do in any given year. The fact that it was a lousy snow year for the southern Rockies may allow earlier and greater heating of the land and atmosphere, which in turn, could drive a stronger monsoon, but this isn’t at all a sure bet,” Overpeck said in an email conversation. 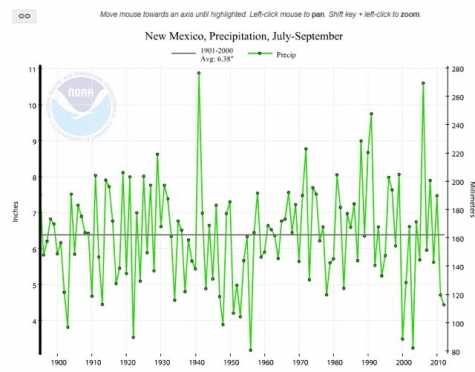 The last two Southwest Monsoon seasons have featured below average rainfall in New Mexico, although not as low as other years, as this time-series shows.
Click on the image to enlarge. Credit: NOAA/NCDC.

The lack of El Niño or La Niña conditions in the tropical Pacific Ocean makes it even harder to predict the monsoon with much confidence, said Michael Crimmins, an associate professor at the University of Arizona. El Niño and La Niña events, which feature above and below average sea surface temperatures in the tropical Pacific Ocean, respectively, can influence the weather pattern that drives the monsoon, and enable forecasters to provide water managers with more useful information ahead of time, although even then the forecasts tend to be hit-or-miss.

Without either such event present, Crimmins said, “We don’t really have any signal to work with at all.”

“We’re all just kind of sitting tight and waiting,” he said.

Even an above average monsoon season won’t provide enough water to erase the long-term drought and restore the area’s rivers and reservoirs to near-normal levels. For that, the Southwest needs to see both higher than average spring snowpack and cooler-than-average conditions, a 1-2-punch that hasn’t happened consistently for several years.

However, a wet summer could still benefit ranchers, who have been forced to sell off many of their cattle due to the lack of food. Summer rains can quickly get grass growing in forage lands, which would be beneficial for ranchers. According to Crimmins, the drought has taken such a toll on many cattle herds during the past few years that ranchers might not be able to capitalize on a wet spell to the same degree that they have in the past.

Historical records show abundant evidence of multi-decadal droughts triggered by natural climate variability — droughts that were much more severe and long-lasting than what the region is experiencing today. A recent study using evidence found in tree rings concluded that the failure of both winter snow and summer monsoon seasons is a key characteristic of the region’s major, long-duration droughts.

“We know that drought can last decades down here,” Crimmins said. 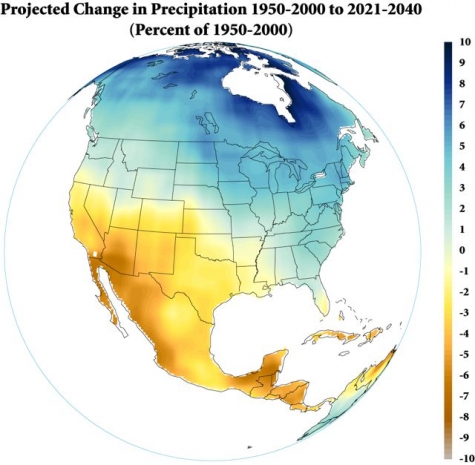 Computer model projection showing the expected change in precipitation across North America, with a long-term drying trend in the Southwest U.S. and Mexico.
Credit: Lamont-Doherty Observatory.

Overpeck, of the University of Arizona, said the increase in average temperatures in the Southwest means that droughts are already having greater impacts than they used to. “This warming is a symptom of human-caused climate change, and droughts of the future will only get hotter and hotter on average,” he said.

Given the history of the region, along with climate research that shows that one very likely consequence of global warming will be hotter droughts and an overall, long-term drying trend in the Southwest, there is ample reason for scientists and water managers to be concerned that the population growth in places like Phoenix will put a tremendous strain on water resources.

“I don’t expect temperatures to return to 20th Century average conditions, and the effect of long-term warming on the water budget, added to all the other non-climate stresses on water resources here, is what makes 21st Century water management such a daunting challenge,” said David Gutzler, a professor at the University of New Mexico in Albuquerque.