If a Power Plant Is Built in U.S., It’s Likely to be Renewable

If a new electric power plant is built in the U.S. these days, chances are it’s renewable — either wind or solar.

That’s the gist of a report the U.S. Department of Energy released this week showing that, together, wind and solar accounted for nearly two-thirds of all new electric power plants built in 2015. It’s a trend expected to continue through 2016, even with low natural gas prices likely to keep utilities building plenty of gas-fired power plants, too. 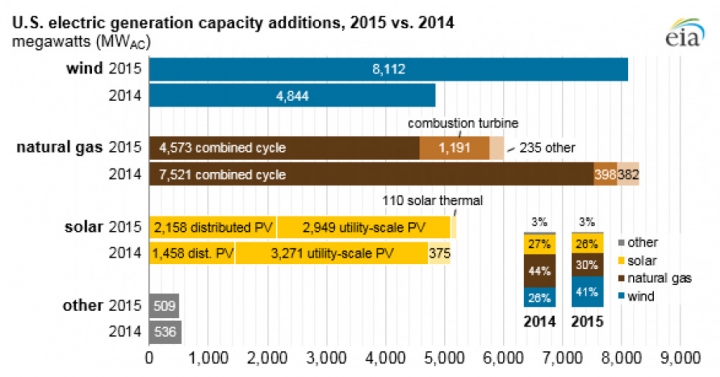 “Right now, it’s primarily a wind and solar market,” U.S. Energy Information Administration analyst Chris Namovicz said, adding that renewables have been thriving on an extension of wind and solar tax credits, though wind is becoming competitive with fossil fuels even without the help of a tax credit.

Burning coal to produce electricity is the world’s leading driver of climate change. In the U.S., low natural gas prices and climate policies are allowing lower-carbon energy sources to eclipse coal as the leading sources of electricity.

Most renewable-powered plants built in the U.S. last year were built in two states — Texas and California — according to EIA data. Texas is the reigning champ of the wind industry, accounting for 42 percent — more than 3 gigawatts — of all the new wind power capacity built in the U.S. in 2015. 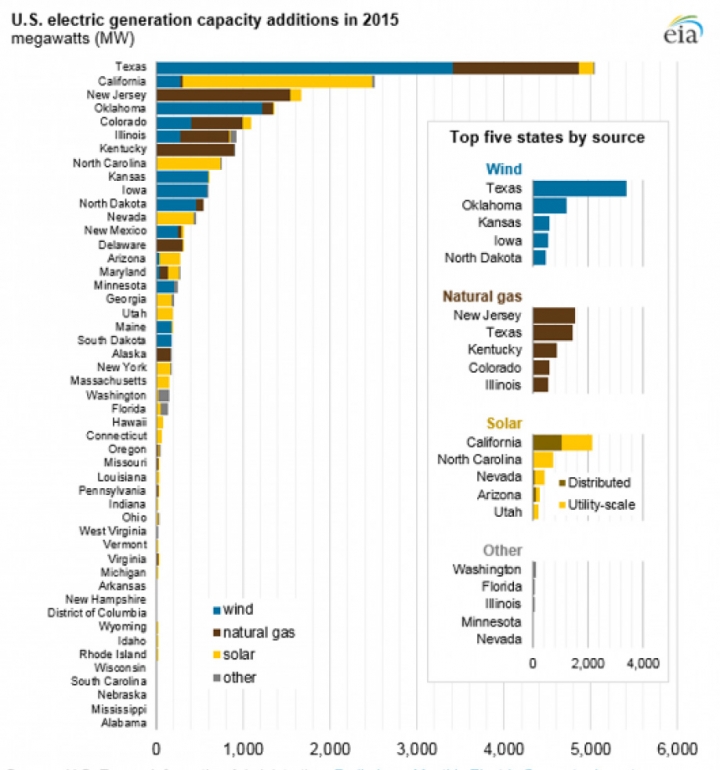 This graph shows which states led the country in building new power plants in 2015. Texas and California were the leaders in renewable energy. Credit: U.S. Energy Information Administration

Wind is in the process of rebounding from the industry nearly going bust in 2013, a year when the industry bottomed out because of great uncertainty about the future of a wind power production tax credit. Last year, Congress extended the tax credit through 2019.

As for solar, California built more than any other state in 2015 — more than 2 gigawatts. The state was responsible for building 42 percent of all new solar power constructed last year.

About half of all that solar energy built in California last year came from large utility-scale solar farms. The rest was built in the form of rooftop solar or small solar power systems.