By Cheryl Katz, The Daily Climate

SOLHEIMAJOKULL, Iceland — A fierce wind shrieks down the glacier slope, flinging ice and grit like a weather-witch from an old Icelandic saga.

The glacier, Solheimajokull, a tongue of ice reaching toward Iceland's southeast coast, has become an apologue of climate change in recent years: Retreating an average of one Olympic pool-length every year for the past two decades due to climbing temperatures, warming ocean currents and disrupted seasons.

The Myrdalsjokull Glacier in southern Iceland. The country is shedding ice at an alarming rate, threatening a culture where ice is an everyday part of life.
Credit: Malcome Browne/flickr

Crouching under 90-mile-an-hour gusts on a stormy autumn day, visitors to Solheimajokull see a rash of dirt cones poking through grey-streaked snow, while piles of rocks, gravel moraines and a now-empty glacial bed about a half-mile away attest to the former reach of this dying giant.

Iceland, lying just below the Arctic Circle, is one of the fastest-warming places on the planet — as much a four times the Northern Hemisphere average. The 300-some glaciers that cover more than 10 percent of the island are losing an average of 11 billion tons of ice a year.

The annual volume carried away from Iceland's glaciers and not replaced by new snow would fill 50 of the world's largest trucks every minute for the entire year.

“It is among the highest losses on the Earth,” said pioneering glaciologist Helgi Bjornsson during an interview in his office at the University of Iceland's Institute of Earth Sciences, overflowing with 40 years of research and books about ice. 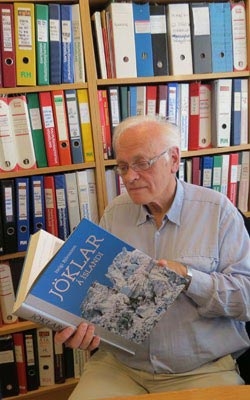 Subject of ancient myth, a proud literary tradition and a lucrative tourist draw, Iceland's majestic white mountains — jökull in Icelandic — are crucial to the nation today. Glacial rivers generate hydropower that provides most of the country's electricity. Glacier ice stores water for its 320,000 residents.

Some of the country's glaciers have vanished already and several others will be gone within a decade or two, said Bjornsson, one of the leading scientists to quantify the link between glacial loss and greenhouse gas-induced warming.

A generation from now there may not be enough water to drive turbines or slake a nation's thirst. Dust storms will swirl over dry glacier beds while huge expanses of exposed earth erode.

Without glaciers, one resident quipped, Iceland is “just land.”

Effects are already beginning to appear. Bjornsson tells of Iceland's longest bridge, a half-mile span over the Skeidara River which drains from the massive Vatnajokull ice cap down to the island's south coast.

“A few years ago, the river disappeared and now this bridge, the longest bridge in Iceland, is just standing there, and there's no water underneath it,” he said. “So it looks like we are crazy here in Iceland.”

On this Kentucky-sized island one is never far from the ice — look up from just about anywhere and you'll see towering white peaks and hanging glacier-filled valleys — and Icelanders are feeling its loss in a variety of ways. 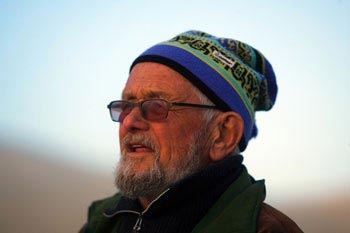 Magnus Hallgrimsson has spent a lifetime on the ice. The wiry octogenarian is vice-president of the Iceland Glaciological Society, a group of volunteers who have conducted annual surveys of the island's glaciers since 1950, and has been assisting Iceland Search and Rescue since 1948. An avid sportsman, he's made numerous glacial ascents and crossed the island's massive interior ice field many times, as the photos lining his Reykjavik apartment attest.

A Path of 'Just Gravel'

In the past few years, Hallgrimsson said, some of the glaciers he frequents have begun to disappear. He's measured retreats of as much as one third of a mile: “The tail of the glacier goes back and leaves just gravel.” And the melt, which he first noticed in the mid-1980s, is accelerating. “In the last years in the lower areas of the Tindfjallajokull (a glacier in the southern highlands),” he said, “all the snow is gone.”

Iceland's ice caps — the largest in Europe outside of Greenland — have waned 6 percent since 1995, with lower glaciers like Solheimajokull, an outlet of the Myrdalsjokull ice cap, shrinking much faster. Because Iceland’s warming began more than a decade later than in Europe and North America, that decline signals a very rapid change.

And with the melt rate speeding up as climate change effects intensify and feed off each other, Iceland could lose 30 percent of its glacial mass by 2050 according to Bjornsson.

If temperatures rise 2 degrees Celsius (3.6 degrees Fahrenheit) by the end of the next century — the maximum acceptable increase set by nations at the United Nations climate talks — Bjornsson calculates that Iceland's glaciers will be no more than small “ice museums” atop the highest peaks as early as the mid-2100s.

'Nailed and Tied it Down'

Artist Vigdis Bjarnadottir read an article in her morning paper last year about a new study by Bjornsson and colleagues predicting that the glacier she had grown up near — scenic Snaefellsjokull on the island's western peninsula — could be gone within 20 years.

“I was very shocked,” said Bjarnadottir, who spent her childhood in the village of Olafsvik, at the foot of the rising glacier 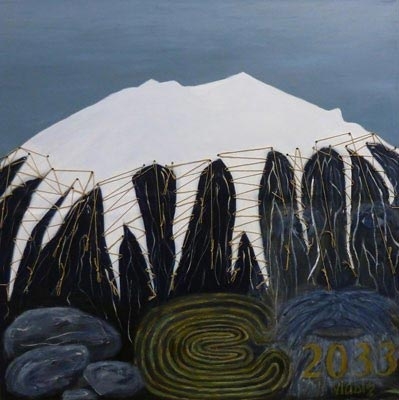 “This is my favorite mountain. We can see it from Reykjavik on a good day, always so beautiful,” said the retired presidential secretary, who now lives in Gardabaer, just south of the capital. The news inspired her to create a painting of the mountain, with tacks and strings crossing its glacial peaks.

“As we do not want the Snaefellsjokull Glacier to disappear,” she declared emphatically, “I have nailed and tied it down.”

The painting, exhibited in a western Iceland art exhibit last summer, also shows a half-man half-giant named Bardur Snaefellsas. According to Icelandic lore, Bardur was one of the region's earliest settlers, and descended into the glacier more than a century ago to become a guardian of the land. But the giant seems to be off-duty these days — the glacier already looks much smaller to Bjarnadottir.

“You are able to see new landscape, new black lava cliffs,” she said “where there was ice some years ago.”

Travel photos more than a century old provide stark illustration for Bjornsson. The pictures of southwestern glacier Kotarjokull were taken by English explorer Frederick W.W. Howell as he made the first ascent of Hvannadalshnukur, Iceland's highest peak, in 1891. Two years ago, researchers visited the same spots and took new photographs.

Comparing the old and new photos, Bjornsson and colleagues determined that Kotarjokull had lost 20 percent of its volume since Howell's visit. While ice remained at the glacier's top, lower areas that had been covered 120 years ago were now completely bare.

The land of fire and ice has become a growing tourist destination in recent years, with more than two-thirds of a million international visitors in 2012, according to the Icelandic Tourist Board. Lured by its glacial beauty and recreational opportunities, tourists spent a record 238 billion Icelandic kronur (about $2 billion U.S.) here last year, putting the industry second to fishing as the island's biggest foreign money-maker. 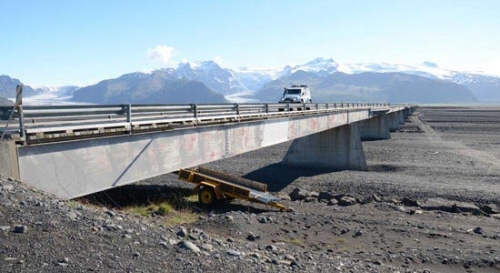 But the warming climate's assault is already evident at some popular attractions, such as Solheimajokull, where two would-be ice climbers from Germany stared dejectedly at the wind-swept dirt on that howling autumn day, then trudged back to their van and drove away.

Not all Icelanders see their country's shrinking glaciers as a bad thing. Glaciers historically posed a looming threat to nearby cities and farms, which lost land to advancing ice and were occasionally destroyed by sudden glacial outbursts called jokulhlaups, said University of Iceland engineer Finnur Palsson, a frequent collaborator on Bjornsson's research. As glaciers recede, he said, the danger from jokulhlaups may lessen.

“Also some very fertile land is coming from under the glaciers that can be utilized,” said Palsson. “Another good thing from the energy point of view is there's more water to harness for the power stations.”

And many Icelanders don't mind the weather being a little bit warmer.

“In reality, the negative impacts are relatively few,” Palsson said, “if you look at the point of view of us living here.”

Indeed, thawing ice could provide a much-needed economic boon to this country still struggling to recover from its 2008 fiscal collapse. Iceland's president Olafur Ragnar Grimsson is promoting plans for a major sea port on the island's north-east coast to serve new shipping routes on the opening Arctic Ocean. The government hopes to make Iceland an Arctic business hub and trading partner for countries like China seeking the anticipated oil and gas bounty exposed by receding Arctic ice. 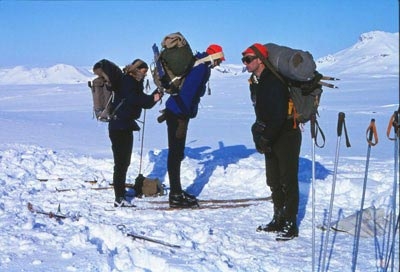 What's more, Iceland's glaciers have advanced and retreated several times in the 11 centuries that humans have lived there, leading many to see the current retreat as part of a temporary, natural cycle.

“The glaciers have always been going up and down,” said Hallgrimsson, who noted that early settlers faced considerably less ice than do residents today. “It looks like we are getting a period similar to around 900 (A.D.)

“Of course nobody knows.”

“People see it as 'business as usual,'” said Asdis Jonsdottir, science policy advisor for the Ministry of Education, Science and Culture, who examined the development of Icelanders' scientific knowledge on glaciers and climate change in her recent doctoral dissertation. As part of her research, she accompanied the Glaciological Society on four glacier-measuring trips.

Time and again, Jonsdottir said, the surveyors showed her signs that the glaciers were shrinking, describing how much higher the ice used to reach or pointing out now-visible features that were once covered.

“You always have these stories, 'My first time on the glacier, it went up to there,'” Jonsdottir said, waving an arm toward the ceiling of her Reykjavik office. “And there are new islands coming up out of the ice. We visit them and people talk about that.”

But for all their discussion of Iceland's retreating glaciers, the surveyors made little or no mention of climate change, Jonsdottir said. “Experiencing these changes didn't necessarily mean it was becoming a real issue for them.”

Poetry in the Ice

Bjornsson, who recently retired, has faced similar reactions since his studies first predicted that carbon dioxide put out by burning fossil fuels would melt away Iceland's glaciers in the not-too-distant future.

“We were told this was speculation,” Bjornsson said. “But everything we said has come true…. The change in glaciers in Iceland is now even faster than we predicted from our models in the mid-90s.”

The demise of Iceland's glaciers is especially poignant for Bjornsson, who spent two months every year on the ice for much of his working life, including 11 years as president of the Iceland Glaciological Society. Paging through a book of stunning photographs of glaciers that he took over the years, he stops at a photo of Vatnajokull, his favorite glacier, where he conducted most of his research. It was near here that he developed his life-long fascination with glaciers while manning a weather station for a summer job before college.

“I don't know whether I can explain this in English, and perhaps not even in Icelandic, but … when you're on the ice, it's endless white, and then the sky…. You can have a variety of colors and reflections … the evening when you start to see shadows…,” Bjornsson said.