There was definitely some pretty spectacular weather around the country this week, including a derecho, lots of lightning striking skyscrapers, and the first hurricane of the 2014 Atlantic season. In case you missed any of those events and the stunning photos they produced, we’ve got you covered: Here are our picks for some of the best weather images of the week.

As Hurricane Arthur wallops the coast of North Carolina, there are assuredly many images being broadcast of its whipping winds and the surging seas they’re pushing ashore, but some of the most amazing views of the storm come from the ultimate of viewpoints: space. Astronaut Reid Wiseman snapped several pictures of the burgeoning storm from his post on the International Space Station, which orbits 220 miles above the Earth’s surface on average and circles the globe in about 90 minutes. With all of those orbits, Wiseman was able to take several photos of the storm, from its inception as a tropical depression to an eagle’s eye view of its eye once it hit hurricane strength. The curvature of the Earth is often clearly visible in his photos, showing the large scale of the storm, but the smallness of the planet at the same time. 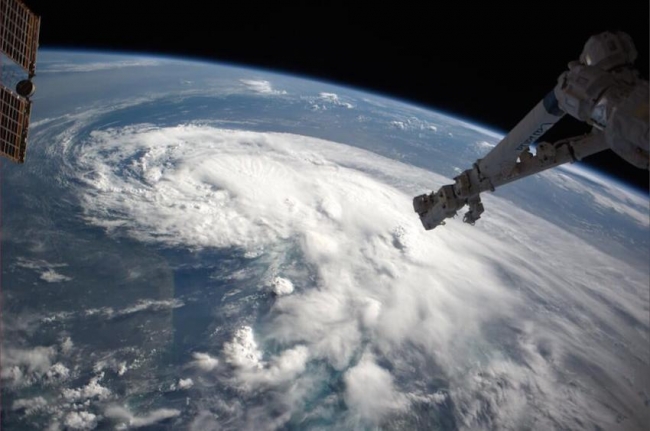 On the last day of June, thunderstorms over Iowa became organized and formed a curving line of storms that move rapidly across the area, from Iowa to Ohio. These storms are called derechos, which are long-lived, fast-moving storms that produce ferocious straight-line winds (as opposed to the cyclonic winds of a tornado). As the storms approached Chicago, they produced scenes with apocalyptic skies and epic shots of lightning striking buildings, including the iconic Willis Tower (formally the Sears Tower). Kaboom!

The storm moves in over Chicago… pic.twitter.com/v4UEt7mgRW

And because we’re suckers for cool shots of lightning, we had to include some “Wow”-worthy photos that made the rounds after a gnarly line of storms moved over New York City on Wednesday evening. Warm, humid air hanging out over the area created an unstable atmosphere that allowed storms to spawn and surge from west to east across the Mid-Atlantic and New England. One photographer caught an amazing shot of the storm as it approached NYC, looking out from New Jersey. The curtain of rain from the clouds is quite a sight. The storms produced a flurry of lightning, which seemed to strike most of the city’s notable buildings, including the World Trade Center and the Empire State Building. Some showed that the lightning strikes were visible from far away, other showed just how close some of them got to those taking pictures.

On June 16, a pair of tornadoes roared through the town on Pilger, Neb., destroying 75 percent of the town, according to the sheriff. One of the twisters was a powerful EF4, the other an EF2. Two other tornadoes were spawned in the area by the storms that blew through that day. Together, the four storms killed two, the first tornado deaths in Nebraska in 10 years, local news outlet 10 11 reported. Nearly two weeks later, photographer Chris Allington snapped a gorgeous sunset in the town, in skies filled with alien-looking mammatus clouds. The bubble-like lobes hang off the bottom of the base of a cloud and are indicative of sinking air. They typically signal that the worst of the storm is over. The residents of Pilger certainly hope so, with their sign in the photo saying, “Pilger will be back!”

You May Also Like
4 GIFs Show If Tropical Storm Arthur Will Ruin Your July 4
EPA Moves to Slash Methane at Landfills and Oil Wells
New CO2 Milestone: 3 Months Above 400 PPM
Map Shows When Summer Heat Peaks in Your Town