Humans Blamed for Starting Most Wildfires in the U.S.

A campfire lit near a waterfall grew into the fatal Soberanes Fire, destroying 57 Californian homes last summer. Two teens were accused of starting the Gatlinburg fire in the fall, which killed 14 in eastern Tennessee. Canadian investigators blamed human firestarters for the wildfire that forced the evacuation of 90,000 from Fort McMurray.

As pollution from fossil fuels and deforestation trap heat and dry out landscapes, making them more likely to burn, a team of researchers has shown that humans are to blame for sparking the vast majority of the wildfires that torch the Lower 48. 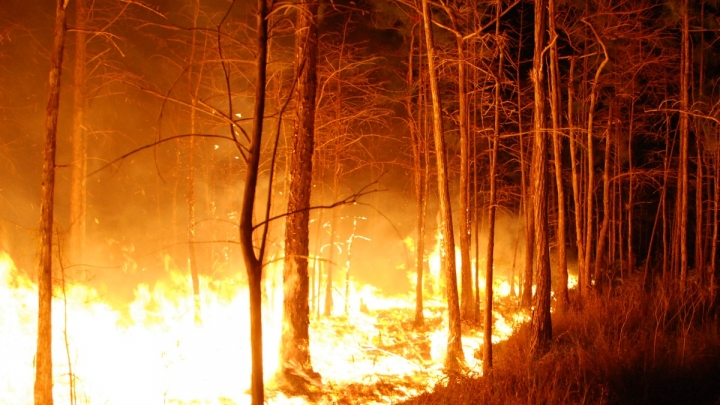 Wintertime wildfires in Florida, like this one, are often sparked by humans.
Credit: U.S. Fish and Wildlife Service/Flickr

About five out of every six wildfires battled in the continental U.S. during the past two decades were started by humans, new research shows, either by accident or by an arsonist. The rest were ignited naturally by lightning strikes.

“The human-ignition element is critical to understand,” said Park Williams, a climate and ecology researcher at Columbia who wasn’t involved with the new study, published Monday in Proceedings of the National Academy of Sciences. His research cited climate change as the cause of half of the ninefold increase in large Western wildfires from 1984 to 2015.

“Other work has focused mostly on the impact of climate on fire, showing that climate is a strong controller of which years are the most active fire years,” Williams said. “This study reminds us that humans play a big role in setting the fires.”

The researchers concluded that humans have more than tripled the usual length of fire seasons — a phenomenon that’s ending lives and costing billions of dollars in firefighting expenses and destroyed property. It’s also disturbing the natural ecology of forests and grasslands, killing off native species and ushering in weeds. 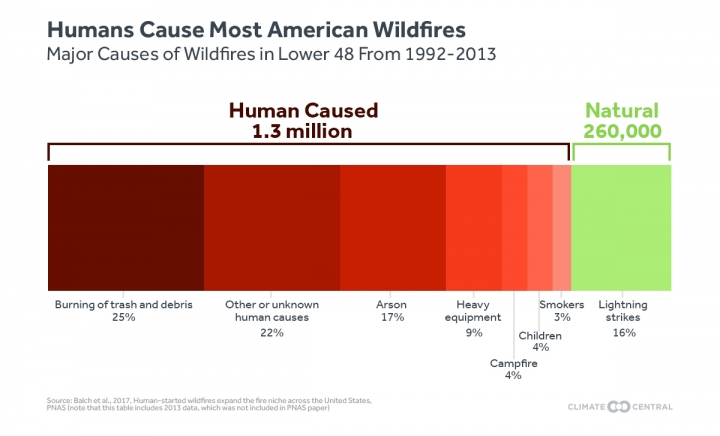 The federal government alone spent about $2 billion fighting wildfires in 2016 — slightly less than the record-breaking level in 2015. In the 1990s, the federal government rarely spent more than $500 million a year on firefighting. Climate Central research has shown the fire season in the American West has grown by 105 days since the 1970s, a trend linked with warming weather.

Monday’s finding was a partial vindication of Smokey the Bear, a U.S. Forest Service mascot whose “only you can prevent forest fires” motto is frequently chastised by some experts for incorrectly implying that all wildfires are bad.

“Part of the message here does appear to be a little bit reminiscent of Smokey the Bear,” said University of Idaho climate and geography researcher John Abatzoglou, a coauthor of the new study. “Smokey the Bear isn’t totally wrong. But not right, either.”

Regular wildfires are essential components of ecosystems across vast parts of the U.S., particularly in the West, helping clear out dry leaves and grass, reducing risks of devastatingly large fires.

But humanity’s firestarting ways are causing fires to burn at unnatural times and in unnatural places. Humans tend to start fires close to cities and buildings, where they can cause the most harm, and at times when lightning storms are rare.

Abatzoglou and scientists from a handful of other universities used a database maintained by the U.S. Forest Service to analyze the causes of more than 1 million wildfires across the Lower 48. During two decades studied, lightning was found to have started 16 percent of the fires. 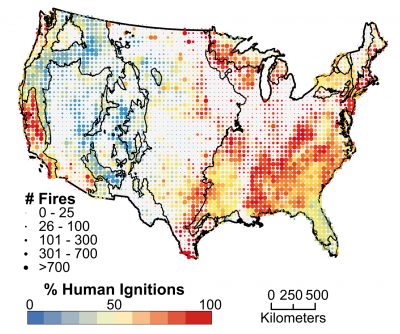 A chart from the new paper revealing the heavy role humans play in starting wildfires across the U.S.
Credit: PNAS

Fires ignited by lightning were responsible for about half of the area burned by wildfires, with natural fires started in wilderness areas more likely to be left to burn themselves out.

“Lightning starts fires pretty much exclusively in the summer, and then humans are all over the year,” said UMass ecologist Bethany Bradley, another coauthor of the study. “We should be stopping people from starting these accidental fires. We do need to put out campfires. There’s really no good that comes of you letting your campfire burn down a forest.”

The database covers only wildfires that prompted firefighters to respond, which means fires started by lightning in remote areas may have been overlooked — a possible bias in the data that the researchers are investigating. “The government database might be underreporting some wildland fires caused by lightning,” Bradley said.

The main human cause of fires was found to be the burning of leaf litter, logs and other debris, with flames getting out of control and leading to conflagrations. Arsonists were blamed for slightly more fires than lightning.

“Arson fires are ignited for a variety of reasons,” said Jeffrey P. Prestemon, a U.S. Forest Service researcher who wasn’t involved with the study. “One of them is revenge — an arsonist may be trying to get back at a landowner for some reason. And another reason might be pure vandalism.”

Smokers, equipment operators, campers and children were implicated in thousands of fires apiece.

“We seem to forget that when we talk about our vulnerability to wildfires,” Jennifer Balch, a fire ecologist at the University of Colorado, Boulder who helped produce the study. “There’s an element to them that’s not wild, that’s us starting them.”

Results varied between regions and seasons. The fire-starting impacts of humans were heaviest where natural fires are relatively uncommon, such as Florida in the winter. Humans were blamed for virtually all of the fires started in some low-lying parts of California, but for just a third of the fires in some of its mountains, where fire is a common part of the natural landscape.

“Not all fire is bad,” Balch said. “There’s good fire and there’s bad fire. A part of the problem that we’re living with today is that we have a lot of the wrong kind of fire.”

You May Also Like:
The U.S. is Poised to Set a Record-Setting Record
Senate Mulls ‘Kill Switch’ for Obama Methane Rule
California Farmers Use Floodwater to Replenish Aquifers