The largest concentration of methane emissions seen in the U.S. over the past decade has been detected by satellite over the the most active coal-bed methane production area in the country — the Four Corners area of New Mexico, Colorado, Utah and Arizona, according to a new study published Thursday.

The hotspot, which predates the current hydraulic fracturing, or fracking, boom in the region, is over the San Juan Basin, where energy companies have been drilling and producing natural gas from methane deposits found in underground coal seams for many years. The natural gas is composed of more than 95 percent methane. 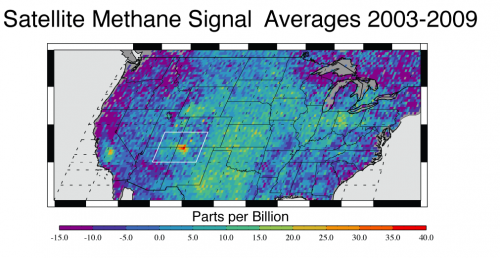 The study, published Thursday in the journal Environmental Research Letters, shows that methane emissions from traditional oil and gas development are significantly underestimated over large scales, its authors say. Over the span of a century, methane is 35 times as strong as carbon dioxide as a climate change-driving greenhouse gas and has a significant effect on exacerbating global warming in the short term.

Led by researchers from the University of Michigan and Caltech, the study analyzes seven years of emissions data — from 2003 to 2009 — captured by a now-decommissioned European Space Agency satellite that measured global greenhouse gases between 2002 and 2012. It’s the same satellite a recent Harvard University study used to determine that livestock digestion released more methane than the oil and gas industry did in 2004.

The hot spot the researchers found, which was validated by ground instruments, covers about 2,500 square miles over the Four Corners area, where coal-bed methane development in the area released about 650,000 tons of methane into the atmosphere annually for each of the seven years.

That amounts to 10 percent of the U.S. Environmental Protection Agency’s official estimate of methane emissions for all of the U.S. during those years.

No higher rate of methane emissions was found anywhere else in the U.S. during that period.

The research follows numerous new studies that show that natural gas production and distribution leak an amount of methane that scientists have yet to fully quantify. The studies also suggest leaking methane is not figured into official government estimates of total U.S. methane emissions.

In another study published this week in the journal Earth’s Future, researchers from the University of Bremen, Germany, and the University of Maryland used satellite data to estimate that methane emissions from oil and gas fields in North Dakota and Texas are increasing and may be leaking into the atmosphere as much as 10 percent of the gas produced in those areas.

The Michigan and Caltech researchers had noticed the Four Corners hot spot while analyzing satellite data years ago, but considered it erroneous. When they realized the data predated the current fracking boom, which began in the West in 2009, they took a closer look and realized that the emissions hot spot they found is unrelated to fracking.

“The results are indicative that emissions from established fossil fuel harvesting techniques are greater than inventoried,” the study’s lead author, University of Michigan-Ann Arbor atmospheric scientist Eric Kort, said in a statement.

“There’s been so much attention on high-volume hydraulic fracturing, but we need to consider the industry as a whole,” he said.

Kort told Climate Central that it’s very likely the methane hotspot exists even though energy development in the Four Corners has involved more hydraulic fracturing than during the previous decade. He said he is involved in another study that will use aircraft to measure emissions over the Four Corners in 2015. 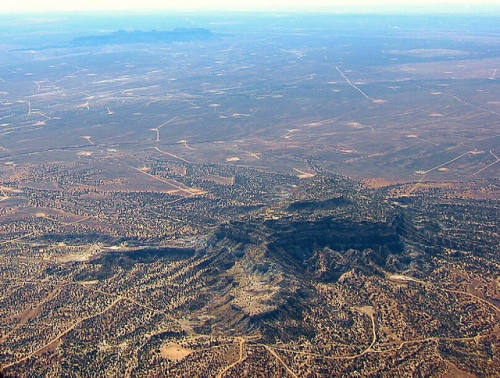 “Their conclusion is certainly important and consistent with a lot of other science coming along,” said Cornell University biogeochemist Robert Howarth, whose research has focused on methane emissions from natural gas operations in the Northeast.

Using satellite data to quantify methane emissions from fossil fuels production is important, Howarth said, because it and other “top down” studies using air quality measurements taken over oil and gas fields are proving to be more accurate than “bottom up” emissions estimates used by the EPA. Bottom-up studies estimate based on expected emissions from oil and gas equipment as reported by the energy industry itself or by scientists taking measurements near the equipment itself.

“The satellite data are the best data yet on it,” Howarth said. “It doesn’t surprise me at all the numbers are higher than what the EPA has traditionally said. The traditional bottom-up approach is inherently going to miss things.”

You May Also Like:
A Timeline of 2013 Extreme Weather and Global Warming
Oceans Getting Hotter Than Anybody Realized
Coal Plants Lock in 300 Billion Tons of CO2 Emissions
Crowdsourced Photos Provide Drought Snapshots
A Tale of Two Cities: Miami, New York and Life on the Edge