It turns out the hole in the now famous ozone layer above the South Pole isn’t the only hole in the atmosphere. Researchers recently discovered, to their considerable surprise, that the atmosphere above part of the western tropical Pacific Ocean is nearly devoid of one of the key chemicals that scrubs pollutants from the air. 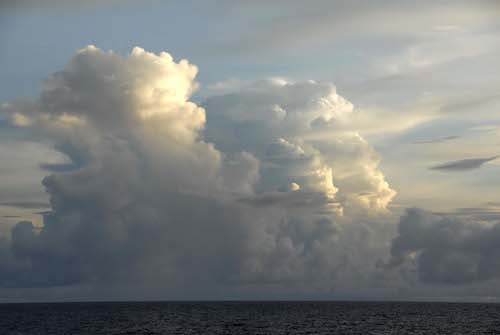 In tropical thunderstorms over the West Pacific, air masses and the chemical substances they contain are quickly hurled upward to the edge of the stratosphere. On the way, hydroxyl (OH) molecules “scrub” these substances from the air before it reaches the stratosphere, where they would be able to spread around the globe and would last for longer than in the lower reaches of the atmosphere. Except in a region of the tropical Pacific a hole in this OH “shield” has been discovered.
Credit: Markus Rex, Alfred Wegener Institute

This newfound hole occurs naturally over thousands of kilometers in one of the most remote places on the planet (which accounts for its having gone unnoticed until now) and one of the main spots where air is sent up to the stratosphere. The stratosphere is the layer of Earth's atmosphere above the troposphere, the layer where humans live and in which most weather occurs. Having air shooting up to this layer without first being “washed” of all the junk that humans and nature put into the atmosphere has uncertain implications for the health of the planet’s protective ozone layer and its overall climate.

Marcus Rex, a climate scientist for the Alfred Wegener Institute, Helmholtz Centre for Polar and Marine Research in Potsdam, Germany, stumbled onto the discovery of the hole while sending balloons with ozone-detecting probes into the atmosphere from onboard the research vessel Sonne far out in the Pacific. Probe after probe went up every 250 miles and returned the same puzzling result: The levels of ozone in the air column some 9 miles up — all the way to the stratosphere — were below what could be reliably detected by the instruments.

“I first suspected a series of false measurements and had to convince myself that the measurements were correct,” Rex told Climate Central in an email.

But the probes were right: There was barely any ozone throughout this huge chunk of the atmosphere. Without any ozone, there weren’t any hydroxyl radicals, a molecule made up of an oxygen and hydrogen atom (designated as OH) that is highly reactive in the atmosphere. This reactivity makes it an excellent “detergent” for cleaning from the air many of the thousands of other chemical compounds released by humans, other animals, microbes and plants. For this reason, the layer of OH that exists elsewhere in the troposphere is known as the “OH shield.”

“Only a few, extremely long-lived compounds manage to make their way through the OH shield,” Rex said in a statement.

But where the hole has been found, the air moving to the stratosphere (driven by warm sea surface temperatures, which help cause the air to rise) isn’t subjected to the OH shield and so can reach the upper layers of the atmosphere. The stuff that reaches the stratosphere can remain up there for years and spread around the globe. 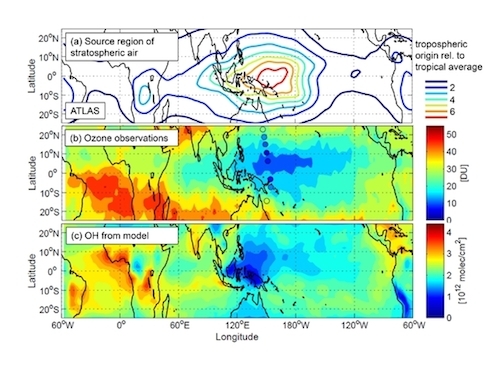 The location and extent of the OH (or hydroxyl) hole over the western tropical Pacific Ocean.
Credit: Markus Rex, Alfred Wegener Institute

Among the things that can reach the stratosphere through this hole are certain ozone-destroying compounds that contain the element bromine that could eat away at the planet's ozone layer, which protects life on the surface from the sun's harmful UV rays. This source of ozone-eating chemicals could account for the discrepancy that has been noted between measured ozone depletion rates in the stratosphere and what models suggested those rates would be, Rex and his colleagues said. However, the bromine compounds don’t pose a huge threat to the recovery Antarctic ozone hole, Rex said, since they need to be in the company of a lot of compounds that contain chlorine in order to destroy ozone efficiently, and such compounds (for example, chlorofluorocarbons, or CFCs) have been mostly phased out by world governments.

“Since chlorine is expected to recover, there is only a small potential of the additional bromine to affect the recovery of the ozone hole,” Rex said.

But research still remains to be done to see the exact contribution of the OH hole to the ozone hole, as well as how it influences Earth’s climate. For example, sulfur-containing particles could be swept up to the stratosphere, where they could have a cooling effect by reflecting sunlight back to space. But the issue might not be so straightforward given the complexities of the atmosphere made clear by the discovery of the OH hole, Rex said.

“Since we just start to understand what is going on, it is not clear yet, how this ‘hole’ interacts with climate change and/or air pollution,” Rex wrote in an email.