How Will We Know When El Niño Finally Arrives?

El Niño, El Niño, El Niño. Because of the implications it has for weather around the world, it’s been the talk of the meteorological and climatological community since the first signs it might be developing emerged back in the winter. It’s like the Marcia Brady of climate phenomena.

For example, hurricane forecasters expect it to tamp down on tropical cyclones in the Atlantic basin this season, while drought-weary officials in California hope it will finally bring them some rain. El Niño could even push 2014 or 2015 to be a record warm year.

Yet an important question persists: How will we know if El Niño is here?

A seemingly simple question, with an answer that isn’t as simple as determining when a tropical storm becomes a hurricane. That’s because there are a number of factors at play for El Niño forecasters with the Climate Prediction Center to consider when they release their monthly outlook. The next one will be issued on June 5, and it’s possible they’ll say El Niño is finally here.

Before jumping into those factors, we need to start with a quick definition (bear with us!): El Niño is part of a larger cyclical climate phenomenon called the El Niño-Southern Oscillation that is characterized by changes in sea surface temperatures in the equatorial Pacific Ocean. When an El Niño is in place, ocean temperatures in the eastern part of this region are higher than normal. During a La Niña (El Niño’s counterpart), below-normal temperatures prevail. These changes in ocean temperatures can in turn influence weather patterns around the globe.

Winds are the drivers of these temperature changes. During so-called neutral conditions, trade winds blow from east to west across the tropical Pacific, piling warm waters up in the western region, allowing cool water from deeper in the ocean to well up in the eastern region. During an El Niño, the winds relax and the warm waters in the west flow back eastward, like a ball rolling down a hill. The opposite is true during a La Niña.

Still with us? Good. Now we get to the really tricky part.

The conditions that typify a La Niña or an El Niño develop over many months. The phenomena are best identified by looking back at a three-month average of sea surface temperature trends in the central-eastern portion of the equatorial Pacific, said Michelle L’Heureux, an El Niño forecaster with CPC. If that average, known as the Oceanic Niño Index (ONI) shows that ocean temperatures are 0.9°F above normal, then you’ve got an El Niño on your hands. 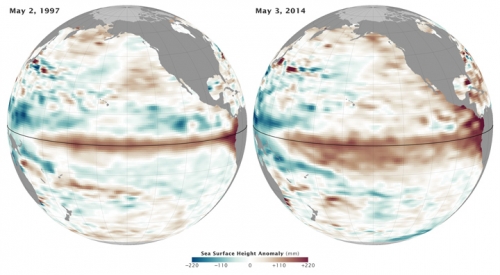 A map showing ocean height anomalies, which correspond to the warm temperatures that indicate a developing El Niño, in early May 2014 compared to early May 1997. Reddish brown indicates ocean heights that are higher than normal while green indicates lower then normal ocean heights.
Credit: NASA Earth Observatory

The trouble is, most folks who care about El Niño’s effects don’t want to wait three months to know if one is already happening. After all, it’s not like you can go back in time and prepare for its impacts. So what are El Niño forecasters to do?

The answer is to find a middle ground. In this case is that middle ground is something called an El Niño Advisory, which has three criteria. First, the one-month difference in ocean temperature in that central-eastern area must be 0.9°F or more above normal. Second, forecasters need to be pretty sure that that the ONI is going to hit that threshold for three months. And finally, the atmosphere has to look like an El Niño is in the offing, with particular patterns of winds and convection that are typically associated with one.

“We just want to see some stuff coming together,” L’Heureux said.

Whether or not all three of these criteria will be met with CPC’s next update remains to be seen, though in the last update, forecasters put the odds at 65 percent that El Niño would emerge this summer. So expect El Niño to grab global headlines. Sorry, Kimye.

You May Also Like
Here’s How Much U.S. Summers Have Warmed Since 1970
EPA Aims To Slash Power Plant CO2 by 30 Percent
Hurricane Season’s Start Brings New Storm Surge Maps
Here Are 5 Resources to Track Hurricane Season