Hot West, Cold East May be the Norm as World Warms

The split personality of this winter’s weather in the U.S. appears to have been thousands of years in the making. The big driver behind the frigid-East and warm-West divide was a kinky jet stream, a pattern that arose 4,000 years ago. While natural variations have controlled its wanderings to date, climate change could make the duality we saw this winter more the norm.

This winter, the Northeast and South were treated to regular blasts of cold air thanks to a big dip in the jet stream, a high-speed expressway that brought icy Arctic air into the regions. Meanwhile, a ridge set up over the West Coast, leaving residents of California and other parts of the West, including Alaska, baking for much of the winter. The hot weather exacerbated the drought currently affecting California.

An illustration of the wavy jet stream that set up on January 6, 2014.
Credit: Earth

Some have referred to this weather pattern as “drunk,” but climatologists have a different name for it: the curvy phase of the Pacific North American pattern. And it’s been in a curvier phase for the past 4,000 years.

Natural shifts have dictated what happens to the jet stream for millennia according to a new study in Nature Communications. Ultimately, climate change may also play a larger role, though. Since the start of the 20th century, the Arctic has been warming at twice the rate as the middle latitudes of the globe. That means the temperature difference between the planet’s head and mid-section is shrinking.

Though the new study didn’t specifically examine the role of greenhouse gases in affecting the phenomenon, Gabe Bowen, a geochemist at the University of Utah, said the effect they’re currently having on the globe’s temperature gradients is similar to the big change that happened 4,000 years ago.

“There was a reduction in that (pole-to-equator temperature) gradient due to natural changes in the earth’s orbit. Today, the same thing is happening but with different forcers: greenhouse gases are warming the climate, especially at the poles,” Bowen said. “If this trend continues, it could contribute to more extreme winter weather events in North America, as experienced this year with warm conditions in California and Alaska and intrusion of cold Arctic air across the eastern U.S.”

Unraveling how climate change may affect the jet stream and the potential for more extreme weather along its path is an active area of climate research. Some researchers have found that the jet stream is becoming wavier while others have said that observations don’t support that hypothesis. One area of research that scientists have agreed on is it’s likely the jet stream has been shifting poleward since the 1970s.

A wavier jet stream and its impact on precipitation, in particular, could have profound implications for water in the western U.S. The jet stream affects U.S. weather most in the winter, which is when the West receives most of its precipitation as mountain snow. Shifts in the amount of snow could have big implications for reservoir levels and farmers, city dwellers and others living downstream.

“Snowpack is our water source and any variability that would change storm tracks would change availability,” said Lesleigh Anderson, a paleoclimate researcher at the U.S. Geological Survey who was not associated with the study. “Global temperatures are interesting, but people want to know what will happen where they are. That means you have to understand how large-scale changes affect regional climate systems.” 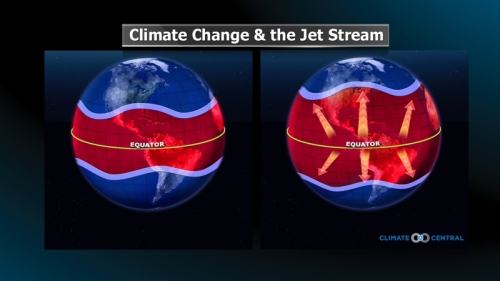 An illustration showing how the jet stream has shifted since the 1970s.
Click image to enlarge.

The new study looks at past shifts in the jet stream using ancient oxygen isotopes at four sites across the U.S. and Canada. The records go back 8,000 years and, in essence, show whether the climate was warm and dry or cool and wet.

Bowen discovered that 4,000 years ago there was a major shift in rainfall patterns across the continent.

“The shift 4,000 years ago was part of a widespread shift in the climate system. It’s pretty well understood that changes in solar forcing — subtle changes in the earth’s orbit — changed the earth’s climate,” Bowen said.

In addition to the big shift, the jet stream pattern over North America has been affected by other shifts in the sun's energy that have lasted centuries. And there are many other factors that produce year-to-year variability.

“It’s interactive with other parts of the climate system,” Bowen said. “It varies weekly and is driven by internal forcings and redistribution of heat in the atmosphere itself. It also varies over longer timescales in part due to changes in sea surface temperatures associated with El Niño and La Niña (that) propagate into the atmosphere.”

Anderson sees the new findings as a way to start to better understand these connections as well as what the jet stream will do into the 21st century if greenhouse gas emissions continue to arise.

“It’s an important component to consider if you want to forecast the future,” she said.