New Hope For U.S. Coastlines Even As Seas Rise

Scientists have encouraging news for planners along the Eastern seaboard staring down the worsening crisis of sea level rise: if managed well, most of the region’s shorelines could adapt naturally to the drenching changes that lie ahead.

The research, published in the journal Nature Climate Change, offers hope that vulnerable coastal areas could remain above water during the decades ahead, even if some of those areas may change beyond recognition. 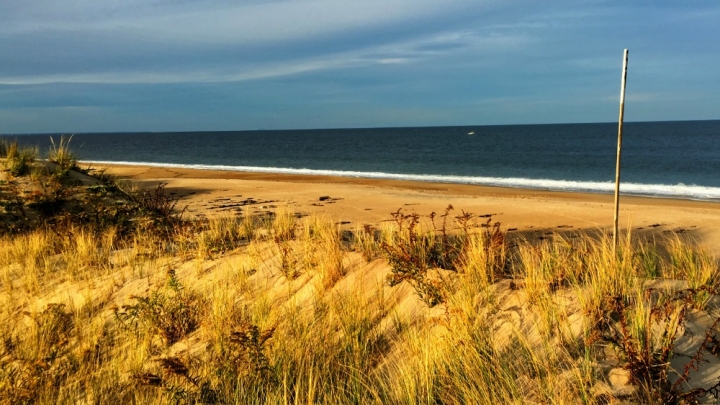 A shoreline at Plum Island, a barrier island in Massachusetts.
Credit: Wesley Fryer/Flickr

About 70 percent of the shoreline from Virginia to Maine could evolve naturally to meet hastening rises in sea levels, the scientists concluded, slowing the losses of land that have been projected by other research.

“The coast isn’t just standing still in the face of rising seas,” said Bob Kopp, a climate scientist at Rutgers University who was not involved with the new study. “Landscapes change.”

The shorelines that were found to be most likely to adapt as tides rise were natural ecosystems — a reminder of the potential hazards associated with paving over them to build neighborhoods and roads as temperatures rise, which melts ice, expands ocean waters, and increases flooding.

The Mid-Atlantic and Northeastern coastlines are home to many such ecosystems, including marshes, beaches and shoreline forests. They could shift, morph and grow as seas swell around them. Farmlands and forests could gradually change into marshes, the scientists say, and marshes can grow vertically as seas rise. 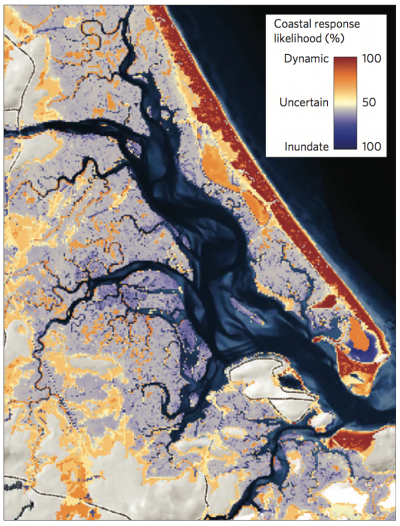 But unlike those natural environments, American coastal cities and towns are currently being adapted in some vulnerable regions to meet the rise of the seas through expensive construction projects — if they’re being adapted at all.

Kopp praised the new study, which was an attempt at beginning to quantify how some of America’s coastlines could respond to rising seas. “Understanding that dynamic response needs to be a major area of research,” Kopp said.

Seas rose more than 5 inches in the 20th century, leading to routine flooding in parts of the East and Gulf coasts. The problem is being exacerbated along those coastlines by erosion and other factors, and seas are expected to rise by several more feet this century.

Previous analyses have tended to assume that shores will remain motionless as saltwater engulfs them, leading to overestimations of flood risks.

Erika Lentz, a U.S. Geological Survey geologist who led the new study, described those limitations in previous studies as a “big frustration” for many scientists.

“A lot of the coastal area, at least in the northeast, but also around the world, is comprised of these ecosystems that we know are going to respond differently to sea level rise than a straightforward inundation,” Lentz said.

Lentz’s team, which included Columbia University and NASA researchers, used maps to divide 10 million acres of Mid-Atlantic and Northeastern coastlines into different landforms, such as developed areas, marshes and barren rocks. They also scoured scientific literature for findings that could reveal how each of the region’s major landforms are likely to respond as seas rise.

The scientists combined that information with sea level rise projections to evaluate how much of the land could adapt to rising seas, and how much would be more likely to be consumed by them.

Lentz said the research showed that shorelines could change as seas rise, but she warned that many of those changes could be harmful, such as by reducing the amount of farmland available. “Just because it’s going to stay above the water doesn’t mean it’s a desired outcome,” she said. 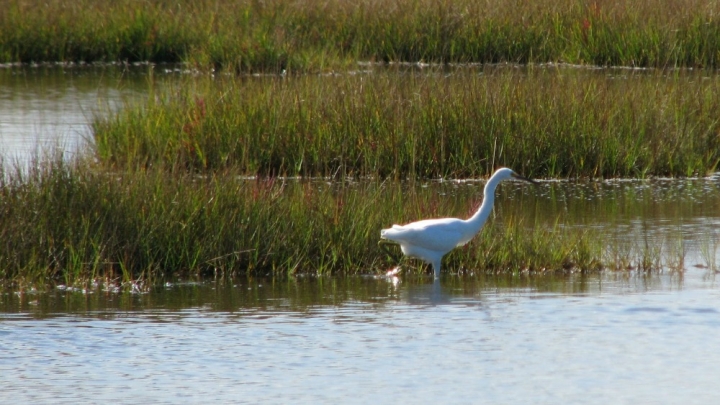 A marsh at Plum Island in Massachusetts.
Credit: garden beth/Flickr

Next, the group intend to apply their newly developed methodology to other coastal regions.

Stetson University landscape ecologist Jason Evans said the findings were a reminder that “programs to conserve coastal landscapes” are “likely to be very good investments.”

Natural coastal systems can buffer high tide floods and storm surges, while coastal developments can worsen an area’s vulnerability to them.

Evans wasn’t involved with the study, but last week he co-published population-based projections showing 13 million Americans could be living in homes that flood daily by 2100. He said the new study helps illuminate future costs of building near shorelines, which may require future spending on seawalls or permanent evacuations.

“Building into vulnerable areas means more cost and more people at risk in the future,” Evans said. “You’re also destroying a natural system that has this buffering effect. So it’s a double whammy.”

You May Also Like:
2015 One for the Climate Record Books
Natural Gas Poised to Surpass Coal For Electricity in U.S.
February, Winter Were Record Warm For Planet