A toasty warm house goes with holiday fixin’s like cranberries and stuffing go with turkey on Thanksgiving.

But for New Yorkers and Bostonians, a cozy warm home heated using natural gas will probably mean paying much higher heating bills than nearly everyone else in the U.S. 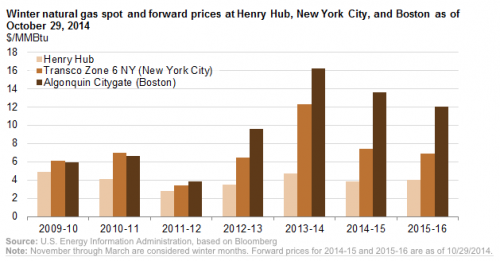 Milder temperatures than last year will likely bring home heating costs down this winter, but natural gas heating costs will still be a lot higher in the Northeast than elsewhere, a new U.S. Energy Information Administration report says.

Natural gas prices are low across most of the country because of abundant gas on the market, thanks to the shale gas and fracking boom, a phenomenon that may have implications for climate change.

The natural gas glut doesn’t translate directly to the Northeast, however, despite Pennsylvania’s Marcellus shale being one of the country’s largest producers of shale gas, EIA operations analyst Richard Yan said.

“We have so much gas; it’s so cheap, but we don’t have enough pipeline expansions to carry the extra gas from the Marcellus to Boston and New York,” he said. “Investors are not willing to pay the capital investment to expand pipeline capacity.”

Some new natural gas pipeline expansion projects between the Marcellus and Northeast cities have been completed this year, but they’re not enough to bring enough of the gas to the region to bring prices down, according to the EIA.

Another factor is liquefied natural gas production in Boston and Canada can’t keep up with gas demand in the region.

The average Northeastern household burns about 77 million Btu of natural gas each year, according to 2009 EIA data.

The New York Public Service Commission estimated in October that milder temperatures would bring a 15 percent decline in home heating costs this winter compared to last winter. Average seasonal home heating costs in New York State are expected to decline by $28 per month to $795 for the entire winter heating season, down from $936 last winter, according to the NYPSC.

“The weather is capricious,” he said. “When it’s cold, it’s going to be extremely cold. It’s very densely populated. When everybody turns on heating facilities, the demand is going to be tremendous.”

So, maybe the best way to keep the heating bill low this winter is to just turn the thermostat down a bit. And wear a sweater.

You May Also Like:
This Is How the U.S. Power Grid Works
Clues Show How Green Electricity May Be in 2050
Earth, Now Available in Ultra High Definition
What Warming Means for Lake Effect Snow