The government has been urged to better articulate the dangers of climate change after a report that shows the frequency of heat waves in parts of Australia has already surpassed levels previously predicted for 2030.

The Climate Council report highlights that Adelaide, Melbourne, and Canberra all experienced a higher average number of hot days between 2000 and 2009 than was expected to occur by 2030.

Research by the CSIRO forecast that Melbourne would experience an average of 12 days over 35°C (95°F) each year from 2030, but the average over the past decade was 12.6 days. 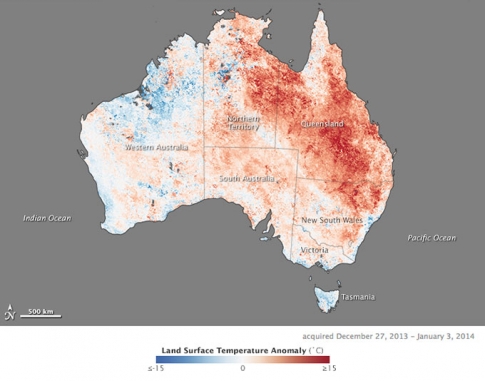 A new report shows that the frequency of heat waves in certain parts of Australia has already surpassed levels previously predicted for 2030.
Click image to enlarge. Credit: NASA

Adelaide experienced an average of 25.1 days a year over 35°C in this time, while Canberra surpassed this mark an average of 9.4 days.

The annual number of record hot days across Australia has more than doubled since 1950, according to the Climate Council report, with the south-east of the country at particular risk from more frequent heat waves, drought and bushfires.

Last month’s heat wave, which enveloped much of Victoria and South Australia, caused 203 heat-related deaths in Victoria alone, according to the report.

Tim Flannery, of the Climate Council, told Guardian Australia that heat waves were the “most dangerous natural hazards in Australia”.

“They kill hundreds of people and the fact they are accelerating beyond the predicted trends is a concern,” he said. “Heat waves are coming earlier, they are lasting longer and they are hotter. They build up for days and before you know it, elderly people, infants and the homeless are in danger.”

Flannery said there was “clear evidence” of these links and said the government had yet to articulate the dangers of climate change and how it would combat it.

“We’re not looking at these things in a linked-up way, we don’t seem to recognize the relationship between the number and intensity of heat waves on bushfires, and the impact on droughts,” he said. “It’s an inconvenient truth and people don’t want to face the truth.

“Aspects of drought conditions are clearly linked to heat waves. I’ve spoken to farmers in NSW and they say they’ve never seen anything like the evaporation rates from dams before, due to the number of very hot days.”

Flannery added: “Governments have a responsibility to keep Australians safe from dangers such as climate change. You need to be explicit about that threat. We have yet to see that policy yet. I mean, who knows what Direct Action is?”

Flannery said he had a “long friendship” with Greg Hunt, the environment minister, who is regularly depicted by Labor as being sidelined within cabinet by Coalition climate skeptics.

“Like any minister he has moments of frustration,” Flannery said. “There are clearly others in the party who are outright sceptics. The government certainly doesn’t seem to be leading the discussion on climate change.”

“China has made incredible gains in renewable energy and reducing emissions intensity. We should be keeping up but we are in danger of losing sight of the frontrunners.”