The U.S. West was once again a land of extremes in July. From Alaska to the Pacific Northwest, July was unusually hot, with some spots recording daily and monthly heat records, while other parts of California got a rare deluge. 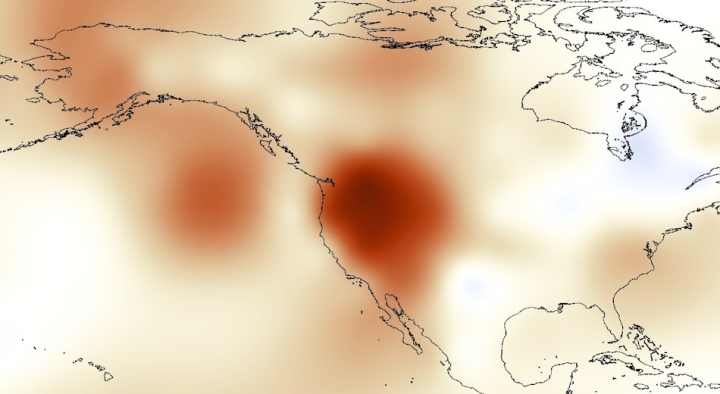 How temperatures across the U.S. varied from normal during July 2015, with red showing warmer temperatures and blue cooler.
Click image to enlarge. Credit: NOAA View

The heat across much of the West has done no favors for the deep drought and has helped to fuel a surge in wildfires, which have raged across Alaska, the Pacific Northwest and Northern California in recent weeks.

A deeper dive into the data released Friday by the National Oceanic and Atmospheric Administration shows that both Oregon and Washington were record warm from January through July, while Alaska and California have had their second-warmest year to date. (2015 had been running ahead of the record heat of 2014 for California, but a return to more normal conditions in July has caused it to drop in the rankings.)

Salem and Eugene, Ore., both saw their warmest July on record, while Portland recorded its second warmest, according to the National Weather Service. Eugene saw a record number of days with temperatures that topped 100°F and on July 31, the town of McMinnville was the same temperature — 106°F — as Phoenix, Ariz., and Las Vegas.

July was the all-time warmest month in Seattle, besting the previous record-holder, August 1967, the NWS said. By July 31, the city had recorded 11 days this year with temperatures above 90°F, which was more than the number of such days during the entire period of 1997 to 2003.

One of the main culprits behind these extended scorching conditions is a large pool of unusually warm Pacific Ocean waters — colloquially termed “the blob” — as well as persistent high-pressure systems that can trap and intensity hot weather. An El Niño has also boosted temperatures, and could help push 2015 to top 2014 as the hottest year on record globally. The background warming of the planet from the excess heat trapped by accumulating greenhouse gases in the atmosphere has also upped the odds of such record-high temperatures.

There is the potential for several of these western states to see their warmest year on record. Oregon is on pace to best its previous hottest year, 1992, currently running about 0.5°F ahead it, Kathie Dello, deputy director of the Oregon Climate Service at Oregon State University, said.

“It's still a bit early to make the call, but all signs point to us finishing at or near the top with El Niño and the blob,” she said in an email. “Put it this way: It definitely won't be record coolest.”

California will be a close call: Above-average temperatures are predicted for the coming months, “which would mean a neck-and-neck race for warmest year on record,” NOAA climatologist Jake Crouch said in an email. “August-December was really warm last year in California, so the rest of 2015 would have to be fairly warm for this year to take the warmest year on record for the state.”

The heat is continuing to exacerbate the drought in the region, with new water-use restrictions recently put in place in some coastal Oregon towns.

That drought, combined with the heat, has raised the risk of wildfires and been a major factor in several large fires that have burned in Alaska and from Northern California to Montana, NOAA said. In Alaska, nearly 5 million acres have burned so far. California currently has 17 wildfires blazing; the biggest fire has been the Rocky Fire, which as of Aug. 7 had burned nearly 70,000 acres and destroyed dozens of homes.

Southern California has fared a bit better, as a surge of moisture brought by the remnants of Hurricane Dolores ushered in an unusual spate of July storms. While the rain that fell wouldn’t sound like much in the wetter East, it was a considerable amount for the California dry season. The 1.71 inches of rain that fell in San Diego in July made that its wettest July on record and amounted to 5,700 percent more rain than the city typically sees in that month, NOAA said.

There are high hopes in California that the robust El Niño event will continue through the year and bring strong winter precipitation to help put a dent into the years-long drought there. However, the warm coastal waters could mean that any precipitation that does fall would do so as rain and not snow, which is keenly needed in the mountains to help provide a source of water in the warm months. How that will play out is still too early to tell.

You May Also Like:
Hawaii May Say ‘Aloha’ to More Hurricanes
All of 2015’s Rain for the U.S. in 14 Seconds
Surging Renewables Frame EPA’s Historic Climate Rules