Heat Is On for 2017, Just Not Record-Setting

2016 is about to cap off the hottest year on record for the third straight year, a remarkable streak fueled primarily by the excess heat trapped in Earth’s atmosphere by ever-rising levels of greenhouse gases.

While that streak is expected to end, in part because of the demise of one of the strongest El Niños on record, 2017 is still expected to be among the hottest years in more than 130 years of record keeping, according to a forecast from the U.K. Met Office. 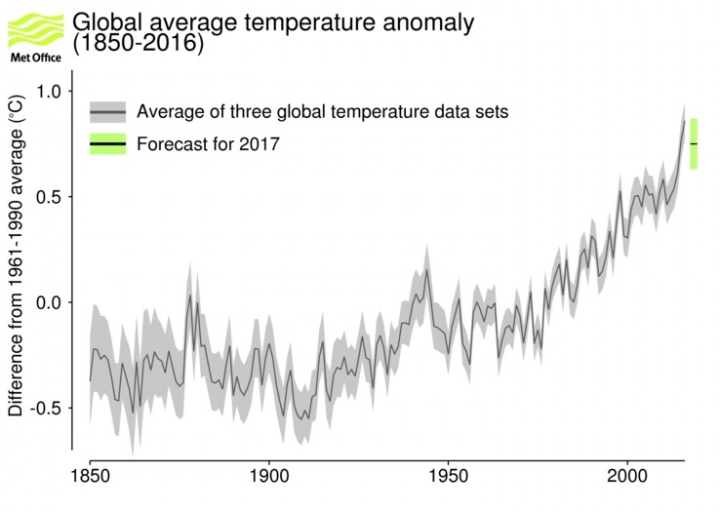 Because of global warming, “each new year is basically predestined to be among the warmest on record,” Deke Arndt, chief of the monitoring branch of the U.S. National Centers for Environmental Information, said in an email.

Because of global warming, 16 of the 17 hottest years on record have occurred this century, the only exception being the strong El Niño year of 1998.

Each year, the Met Office uses climate models to forecast the global annual average temperature for the coming decade, in an effort to improve shorter-term climate forecasting of features like hurricane season activity and droughts.

To date, 2016 is 0.86°C above the long-term average, which means there will likely be a slight dip in global temperatures in 2017. But “the dip in 2017 is much smaller than the long-term increase,” Adam Scaife, head of long-range prediction at the Met Office, said in an email, and even with it, 2017 will likely still rank high in the list of hottest years.

El Niño also helped boost 2015 and 2016 to their record heights, and contributed to some exceptional streaks of monthly records. The first eight months of 2016 were all record warm; going back into 2015, there was an unprecedented streak of 16 straight record-hot months, according to the U.S. National Oceanic and Atmospheric Administration, including the first months that came in at more than 1°C above the 20th century average.

But the main reason these months and years were able to set so many records was the heat that has accumulated from human-caused warming, evident when comparing the global temperature of 2016 to that in 1998, the last year with a similarly strong El Niño.

“The world has warmed a lot since then. That two decades of general warming made it so the next strong El Niño was going to have a chance to set records,” Arndt said. 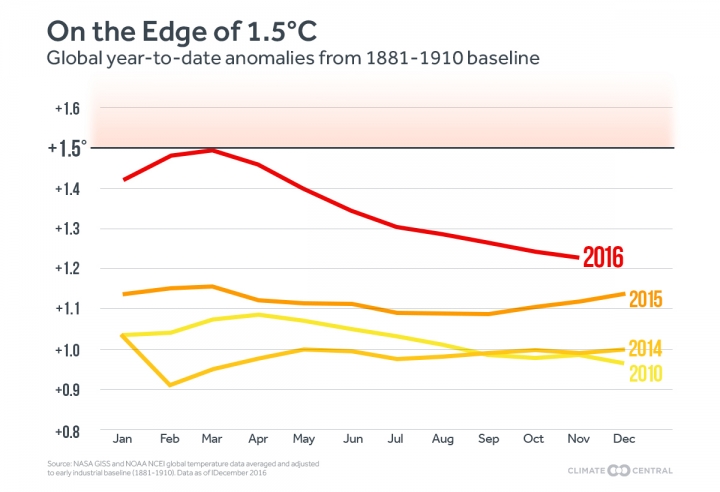 Warming has also made streaks of record-hot years more likely. The only other similarly long streaks of record heat in NOAA’s records came in 1939-1941 and for three of the four years in the 1995-1998 period, Arndt said. But he cautioned in a blog post that comparing these streaks to the current one is like comparing the tallest player in the NBA to the tallest in second grade — the second grader may be the tallest in their class, but they’re not going to dunk over that NBA player.

As for record-cold streaks, there haven’t been two record cold years in a row since NOAA’s records reached “statistical adulthood” in the 1990s, Arndt said. In fact, there hasn’t been a globally record-cold year since 1911, and global warming makes it virtually certain there won’t be for the foreseeable future.

As for when we might see the next streak of record heat, or even the next record-hot year, it could very likely happen whenever El Niño ramps up again, though with warming continuing unabated, it won’t necessarily take a major El Niño.

“I would expect that when we have the next strong El Niño event comparable to this year's, probably several years in the future, we'll be setting more record-high global temperatures,” Blunden said. “If we see new temperature records broken even without a strong El Niño, we can be even more confident in the rate of long-term warming due simply to increasing greenhouse gas concentrations. But I really hope we don't see that.”

Editor's note: This story has been updated to correct the conversion of 0.5°F temperature difference into Celsius. It is equivalent to a change of 0.3°C, not 0.9°C.