SAN FRANCISCO — In a warmer future, it won’t just be the heat that gets us, but the humidity.

By later this century, parts of the world where the population is expected to rise the most will experience an increase in the worst heat events — those where sky-high temperatures combine with oppressive humidity to hit the limits of the human capacity to cope, scientists announced here Monday at the annual conference of the American Geophysical Union.

Women in India try to keep cool during a stifling heat wave in May 2015.
Credit: Zuma Press

Hundreds of millions of people could be exposed to this extreme heat stress several times per year in the Middle East, sub-Saharan Africa, Southeast Asia and especially India, the researchers found.

Such events make it “hard for society to function,” and point to the urgent need for nations to adapt, Ethan Coffel, a PhD student at Columbia University who spearheaded the work, said.

More frequent and more severe heat waves are one of the clearest results of the warming of the planet driven by the accumulation of greenhouse gases in the atmosphere. Studies have already shown that recent heat waves have been made more likely by climate change.

When the mercury skyrockets, our bodies have a coping mechanism: the evaporation of sweat, which helps keep us comfortable. But, as anyone who has been in Florida in August knows, when high humidity accompanies heat, it can hamper that built-in cooling system.

“As the humidity climbs, you lose the ability to cool yourself — pretty quickly, actually,” Coffel said. Young children, the elderly and the infirm are particularly vulnerable to these heat stress events.

Research has suggested that there’s a threshold to what even a healthy human body can handle, defined by a measure of both temperature and humidity called the wet-bulb temperature. A wet-bulb temperature of 95°F (35°C) is thought to be the limit of what is endurable when a person is sitting in the shade and at rest. Essentially it’s the point where sweat stops evaporating, and “is basically unheard of” in today’s climate, Coffel said.

Out in the sun or when doing any kind of labor outside, that limit is lower, as recent heat waves like that in Europe in 2003, where thousands died at much lower wet-bulb temperatures, show.

Coffel and his colleagues examined how the frequency and severity of such heat stress events might change around the globe in a warmer future and how those changes coincided with population growth.

The researchers used climate models to estimate how much more often the worst heat stress events of a recent period (1985-2005) would occur by the 2060s all over the globe, as well as how many times per year certain wet-bulb thresholds might be hit.

The largest increases came, unsurprisingly, in a band across the tropics, because conditions there don’t change as much throughout the year as they do in more temperate locations.

Coffel matched those results with a model of population growth that projects another 1 billion people on Earth by the 2060s, and found that the areas with the largest population booms coincided with those that saw some of the biggest increases in heat stress events. These included the Middle East, sub-Saharan Africa, and Southeast Asia, with India a particular hotspot. (Another recent study focused on the Persian Gulf area also found an increase in such events there.) 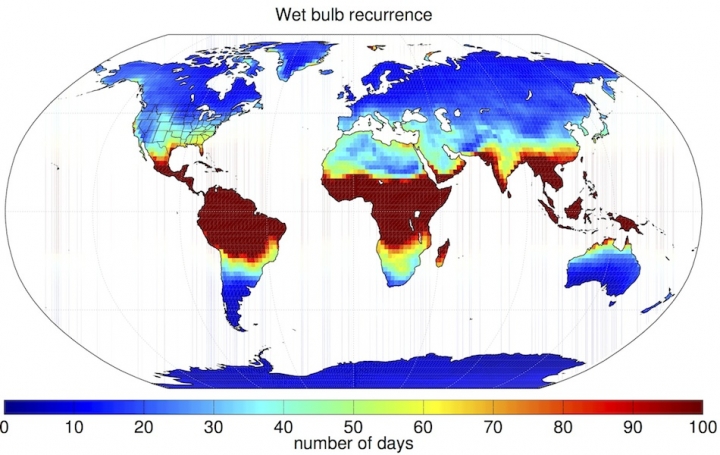 How the number of days above an extreme wet-bulb temperature changed by the 2060s.
Credit: Ethan Coffel

So not only will there be more days that push the limits of what humans can handle, but more people will be exposed to those conditions.

While lowering greenhouse gas emissions could delay the effects, Coffel said, the findings point to the need for societies to adapt to such changes. Populations, particularly in developing countries, already struggle to deal with major heat waves because they lack access to simple measures like clean drinking water or cooling centers.

The researchers hope to explore more of the ways that extreme heat stress might tax society, including how it might interact with other factors like poor air quality, as well as what particular meteorological conditions are important for such events to come together to get a better understanding of how they might change in the future.

You May Also Like:
The Globe’s Hottest Year Just Keeps Getting Hotter
Deadly Heat in Europe 10x More Likely Than Decade Ago