Despite being in the tropics, Hawaii isn’t exactly a hurricane magnet. Yet since 2014, the state has been buzzed by a dozen tropical storms and hurricanes.

New findings indicate climate change is behind at least the 2014 uptick in activity and that the island chain should prepare for more storms to come its way.

Satellite imagery of Iselle as it approaches the Big Island as a tropical storm in August 2014.
Credit: NOAA

The research, published in the Bulletin of the American Meteorological Society’s annual attribution report, specifically links the three 2014 storms that came within striking distance of the island chain — including Iselle, which grazed the Big Island as a tropical storm — to climate change. This year’s nine hurricanes in the central Pacific are also reinforcing the idea that climate change could mean more active hurricane seasons around Hawaii in the future.

Hawaii has a quiet history of hurricanes, in part because it’s surrounded by relatively cool water that acts as a moat keeping most strong storms out or weakening them before they make landfall. Wind patterns also tend to steer storms away or tear them apart. But that doesn’t make Hawaii a completely impervious fortress to tropical storms and hurricanes.

Hurricane Iniki plowed across the island chain in 1992, devastating Kauai and causing $1.8 billion in damage. But since then, the Aloha State has enjoyed a reprieve from major hurricanes. In fact, only six years have seen any storms approach the islands since Iniki.

But in 2014, three storms made their way toward the island. A burgeoning El Niño likely helped their cause, but Gabriel Vecchi, a tropical storm expert at the Geophysical Fluid Dynamics Laboratory (GFDL) who co-authored the new study, said that climate change also upped the odds of more activity, not just in 2014, but in future seasons as well.

“The odds of a year like 2014 are going up,” Vecchi said. “Our assessment is that in the 1800s, the odds of years like 2014 was substantially lower than it is now. So the fraction of attributable risk is something around 90 percent.”

Attributable risk is a common phrase in epidemiology. It describes how much a certain action will increase the risk of a certain disease — say smoking and lung cancer. 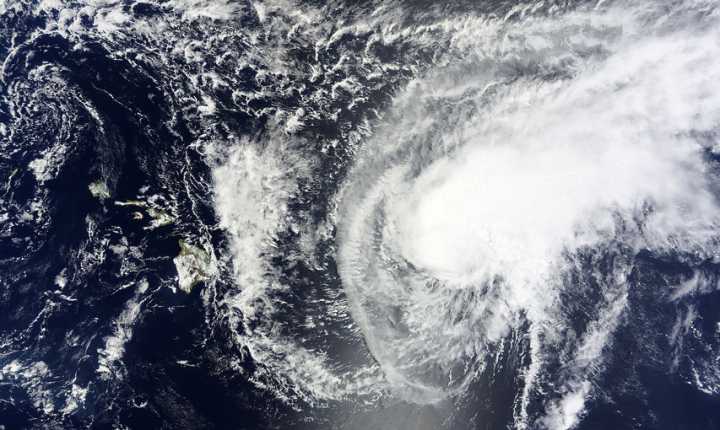 The Terra satellite captured this image of Tropical Storm Guillermo off Hawaii in August 2015.
Credit: NASA

With so many factors at play in a particular basin and relatively few years of data to work with, it poses a challenge for researchers to tease out those relationships. The Atlantic, with its longer records, has been more widely studied and analyzed for how climate change is influencing hurricane activity.

“I would say that it certainly is a challenge to tie anything with tropical cyclones this year with climate change, as we've got both a strong El Nino and a strongly positive Pacific meridional mode at play, which has really amped up activity in the tropical Pacific,” Phil Klotzbach, a tropical storm researcher at Colorado State University, said.

Klotzbach did not review the study and was speaking more broadly about the challenges of cyclone attribution.

Adding to the challenge is defining just how big an area to look over. Hawaii is a small target in a large ocean. But there is reason to think the new study is on the right track.

Previous work by Hiroyuki Murakami, another hurricane researcher at GFDL and co-author of the new study, indicates that rising ocean temperatures in the region will lead to more storms near Hawaii.

Murukami said the new study uses a 310-mile radius around the island chain as a reasonable boundary to “cover the affected region by a storm.” And with 2015 being another extremely active year in the central Pacific, it adds another data point to tease out human vs. natural influences.

These seasonal autopsies are especially valuable for what they can tell us about the future.

“There is some emotional satisfaction and maybe some practical value in identifying the causes of a particular year,” Vecchi said. “But I think the larger value is interpreting the odds of a given year and letting you know about the odds going forward.”

In the case of the Aloha State, it could mean preparing for a stormier future.