Electricity generation is the nation’s largest emitter of climate-changing greenhouse gases, leading many states to set goals for how much of their power should come from low-carbon renewable energy. Today, 29 states have laws mandating a certain portion of their power to be generated from renewables as a way to combat climate change, but none have gone so far as Hawaii and Vermont. 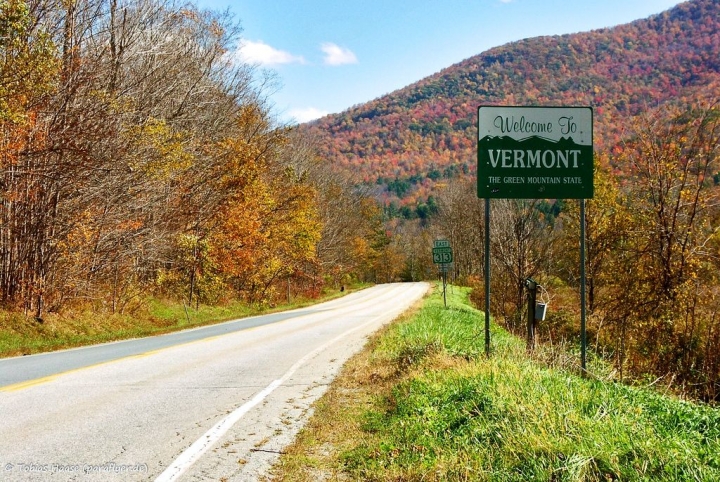 Vermont set a new renewable energy goal in June, requiring 75 percent of the state's electricity to come from renewables by 2032.
Credit: Tobias/flickr

When Hawaii Gov. David Ige signed the state’s renewable energy bill into law on June 8, the Aloha State became the first in the U.S. to mandate all of its electricity come from renewables. The goal must be met by 2045 not only as a way to reduce Hawaii’s contribution to greenhouse gas emissions, but also to reduce the cost of the state’s electricity.

Overall, the U.S. is a mosaic of commitments to renewable energy. More than half the states have some goal to boost renewables as a way to shrink their carbon footprints. California, Maine and New York, for instance, each have a mandate for at least 30 percent of their power to come from renewables. But other states take a different tack. Kansas rescinded its renewables mandate earlier this year, turning it into a voluntary goal. States such as Florida, Idaho, Wyoming and Georgia have no renewables mandate at all.

Those states stand to learn from more ambitious states, and sometimes follow their lead when it comes to climate policy. Such was the case with Hawaii, which announced its intent to pass a 100 percent renewables mandate shortly after California Gov. Jerry Brown declared that his state should revise its renewables goal from 33 percent by 2020 to 50 percent by 2030, said Peter Shattuck, clean energy director for the Acadia Center, a Boston-based think tank focusing on energy and climate change.

“Every state doing something more ambitious fundamentally expands the realm of the possible,” he said. “I think at the highest level, what Vermont and Hawaii stand to show is how quickly renewables are becoming competitive sources of energy.”

Renewables are already a major part of how electricity is generated in both Hawaii and Vermont, which, in addition to being small in size and population, are unique in several ways.

Hawaii, isolated in the Pacific Ocean, has the nation’s highest electric power rates because it generates 93 percent of its electricity using imported crude oil brought there by ship. The high rates have spawned a rush of rooftop solar panel installations across the islands, where 12 percent of all homes have solar cells on their roofs — more than any other state.

On the opposite side of the country, Vermont is unique for different reasons. The state found itself in a bind last year after it lost 70 percent of its electric power generation when the Vermont Yankee Nuclear Power Plant shut down in December. The closure forced the state to get most of its electricity from the New England electric grid, which is powered using mostly natural gas. 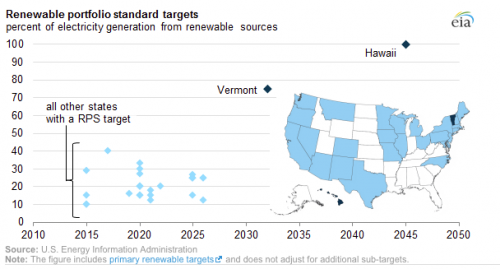 Each state's renewables goals are called “renewable portfolio standards.” Today, 29 states have these standards, with Hawaii and Vermont leading the country in their ambitions for the percentage of their electric power supply they must produce using renewables.
Credit: EIA

Last year, Vermont generated 27 percent of its power using the only electric power sources it has within its borders — renewables, mainly solar and hydropower. And because there are no fossil fuel-fired power plants there, Vermont is also the only state in the nation that is exempt from the Obama administration’s proposed Clean Power Plan, which is slated to regulate carbon dioxide emissions from existing power plants that use fossil fuels.

As those states strive for more renewable power generation, they have much to teach other, larger states.

“Hawaii’s experience will have great immediate relevance in Alaska and Puerto Rico — both areas with similarly unique challenges,” Tom Plant, senior policy advisor at the Center for the New Energy Economy at Colorado State University. “The role of energy storage in Hawaii will be very informative for the rest of the country as well as their ongoing revisions of the outdated utility business model that governs most utilities in the U.S.”

As Hawaii adopts more renewables, it could become a “postcard from the future” for the rest of the U.S., Plant said, referring to a statement Hawaii’s Public Utilities Commission Chair Hermina Morita made in 2014.

Hawaii will set the example for other states for how rooftop solar can expand and possibly become integrated into the electric power grid, while Vermont can show the rest of the country how transportation, home heating and electric power generation may be more significantly decarbonized, Karl Rabágo, executive director of the Pace University Energy and Climate Center in White Plains, N.Y., said.

“It’s a small state, but they’ve got a good blend of rural and urban, so they’ll have a chance to address those issues in a way that I think (other states) can learn from them,” Rabágo said.