Woah, we're halfway there. To the Paris climate summit in December that is (sorry if you were hoping for news of a Bon Jovi tour).

The big event in December is part of an ongoing process of climate talks that include interim meetings scheduled in Bonn, Germany these next two weeks. 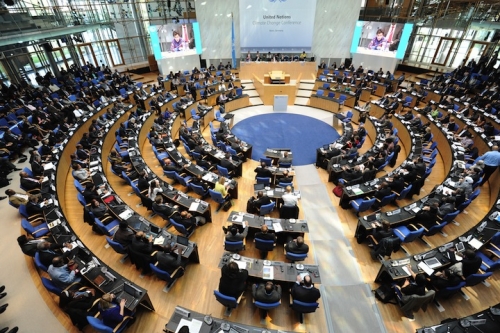 The main goal of all the talks is simple to state, but hard to achieve: cut carbon and keep the world’s climate from warming more than 2°C above pre-industrial levels. Attached to it are a host of other issues including finance, climate adaptation, and weighing who cuts emissions when.

The meetings in Bonn happen to overlap with a gathering of the world’s leaders at G7 elsewhere in Germany where climate change is also on the agenda. Further boosting those discussions was the news on Monday that six of the world’s largest oil companies threw their support behind carbon pricing, adding to flurry of climate activity.

So will the mid-year flurry of action help make meaningful progress toward a unified goal or will it leave the world, as Bon Jovi would sing, livin’ on a prayer? The answer to both is “yes.”

“Bonn is just one of several sessions. You can’t think all these issues will be solved,” Erika Rosenthal, an attorney with Earthjustice’s international program, said. “There’s a good spirit that came out of (February talks in) Geneva and countries are going into Bonn wanting to make progress on these issues.”

Slimming Down The Draft Climate Agreement

Wanting to make progress and actually making progress are different beasts. The February meetings in Geneva bogged down as countries added clause after clause to the negotiating text that will inform any outcome at Paris. What was a slightly plump 37-page document at the start of meetings has ballooned to an overweight 86 pages.

The increased girth comes from a slew of bracketed statements that serve as placeholders and options for the final text. The good news is that’s made the document more inclusive and given more of a voice to developing countries that are usually marginalized in the drafting process. The bad news is the brackets are around some big decisions that need to be made and could make or break an agreement. Bonn will have to be the start of a diet plan for the document to avoid gridlock in Paris.

Of contentious issues that need to be addressed, money is unsurprisingly one of the highest on the list. Developing countries want help adapting to climate risks, funding for damage from extreme weather events that may be tied to climate change, and building a clean energy economy. So far, a few pots of money including $100 billion in climate financing for developing countries have been proposed but those funds have yet to materialize in a meaningful way.

“Financial commitments are really going to have to be ratcheted up,” Rosenthal said.

Deciding If Emissions Cuts Should Be Binding

At the crux of any agreement will be how much to cut greenhouse gas emissions.

Michael Burger, the executive director of the Sabin Center for Climate Change Law, said one of the biggest outstanding issues is whether to make the Paris agreement legally binding or to let countries set goals for reducing emissions but with no legal bearing internationally.

“A key question is what is binding and what is aspirational. This is a sticking point that has gotten in the way of the U.S. ratifying Kyoto and Copenhagen (treaties) and may be a sticking point here,” he said.

That’s because any binding international agreement would have to be ratified by Congress, a dim prospect in the current political climate. In comparison, a nonbinding agreement could allow President Obama and whoever is his successor to use executive actions to reduce U.S. greenhouse gas emissions, essentially bypassing Congress.

The President’s Clean Power Plan currently does just that, though it will have to survive a series of legal challenges in order to be fully implemented. The plan would also get the U.S. to (barely) be able to meet its proposed international climate pledge.

Pledges Are Trickling In

The draft negotiation text isn’t the only document climate negotiators are keeping an eye on. Every country in the world — from 1-billion strong China to small island nations like Tuvalu with its few thousand residents — will have to submit their emissions targets and climate adaptation goals. Those commitments are called Intended Nationally Determined Contributions, more commonly referred to by their acronym INDCs.

So far, 10 have been submitted, including a number of major countries like the U.S., European Union, Canada and Russia. Many more are expected in the next week, but agreements between individual countries such as the one forged between the U.S. and China last year provide a preview of what’s likely to come.

“Everything builds on all these bilateral and pluralateral agreements,” Rosenthal said. “And even pledges by subnational entities. Look at what came out of California. Everything builds momentum toward what we hope will be a robust Paris agreement.”

As for the U.S. INDC, it aims to reduce emissions by 26-28 percent below 2005 levels by 2025. Rosenthal said it was crafted so it can be done under existing legislative authority, which is critical to showing the U.S. is committed to addressing its emissions.

“I think the U.S. INDC is taken at face value and very seriously,” she said.

Businesses and investors, while not bound by the agreements, are also taking note and acting with their dollars, euros, and yuan.

“Pension funds are asking, ‘if I’m investing now for a beneficiary that won’t see a return for 50 years, am I investing in the right companies that will be profitable then,’ ” Frances Way, the chief operations officer of CDP, said. “The life of a business is longer than the term of a government.”

Many companies are coming around to that viewpoint as well, the most recent being the unified action of the six oil companies, that combined generate revenue of nearly $1.4 trillion annually. On Monday, CEOs from those six, including Shell and BP, the world’s No. 2 and No. 3 oil producers by revenue, sent a letter to the United Nation’s climate chief asking for a price on carbon. Having a price would allow them to plan for the future with more certainty and help them remain profitable.

They Probably Aren’t Enough To Meet The 2°C Goal

For all the good vibrations and momentum, there’s one tiny problem: the pledges so far are unlikely to meet the 2°C goal. According to the Climate Action Tracker, none of seven INDCs submitted so far are rated as “sufficient” to keep warming below 2°C. In fact, Canada and Russia were both dubbed downright inadequate.

Bhutan and the Maldives are the only countries in the “role model” category, which is worthy of a gold star, but they only represent a fraction of a percent of the world’s emissions.

“There’s a valid concern that there’s a great deal of expectation being loaded into this Paris agreement and there’s a risk that we’ll have a repeat of Copenhagen,” Burger said.

Copenhagen was supposed to be a turning point for climate talks. Instead it became an acrimonious discussion that led to a weak and vague agreement, which is in partly why Paris is now seen as so important.

With emissions pledges unlikely to meet the 2°C goal, it’s likely that negotiators will have to start thinking about what to do beyond Paris and 2020. Burger suggested one alternative would be to include language in the Paris agreement that “requires or encourages countries that, as they start to achieve their goals, they set new goals that increase the chance that we get as close to carbon free as we can be by mid-century or the end of century.”

That means the final countdown to Paris might not be the end of the road. But that’s a whole other song and dance.