Greenland’s Ice Loss May Slow, But Coasts Still At Risk

The flow of Greenland’s glaciers toward the sea may have increased significantly in the past decade, but a new report in Nature finds that rate of increase is unlikely to continue. “The loss of ice has doubled in the past 10 years, but that doesn't mean it's going to double again in the next ten years,” said lead author Faezeh Nick, a glaciologist at the University Centre in Svalbard, in Longyearbyen, Norway, in an interview.

That conclusion, based on a new, sophisticated computer model, makes the worst-case scenario of sea level rise — an increase of 6 feet or so, on average, by 2100 — look less likely to play out. 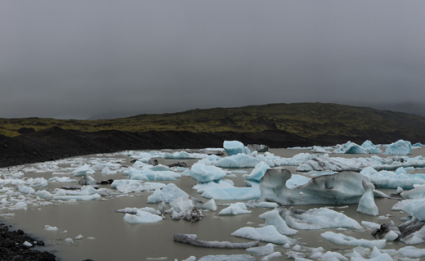 Since the heat-trapping gas that has already put into the atmosphere will be there for hundreds of years to come, Greenland will continue to melt indefinitely. The fact that it may not happen quite as fast as the worst-case scenarios might forecast isn’t all that reassuring.
Credit: flickr/Howard Ignatius

That’s the good news. The bad news is that, in the model at least, the slowdown doesn’t necessarily bring glaciers back to their original, stately rate of flow. And since the heat-trapping gas that has already put into the atmosphere will be there for hundreds of years to come, Greenland will continue to melt indefinitely. The fact that it may not happen quite as fast as the worst-case scenarios might forecast isn’t all that reassuring.

Because even if sea level goes up by only half that much, the combination of rising seas and periodic storm surges could devastate coastal areas around the world. Scientists have concluded, based on earlier studies, that the lower figure of about 3 feet is most likely, and while that research didn’t explicitly calculate anticipated sea level rise, it appears consistent with those estimates.

Earlier studies, based on satellite observations, had also noted that Greenland’s ice flow has started to slow, which means the dumping of icebergs into the ocean should slow as well. Projecting what’s likely in the future, however, is the province not of observations but of models. In this case, Nick and a half-dozen colleagues used a new model that factors in the effects of climate change on both the air above Greenland and on the ocean below.

Those effects, Nick said, depend on the characteristics of individual glaciers. The Petermann glacier in northwest Greenland, for example — one of four the scientists modeled — “has a very long floating shelf, so it’s very sensitive to ocean warming.” As a result, the Petermann has loosed two massive “ice islands” into the sea, one in 2010 that was four times the size of Manhattan, and another, about half as big, in 2012.

But while those were major events, they didn’t affect the Petermann’s overall flow rate significantly. Other glaciers, such as the Jacobshavn, respond to warmer seas not just by letting loose big chunks of ice, but also by flowing more quickly. The reason: Jacobshavn’s ice was mostly grounded on the sea floor, not floating, creating tremendous friction that kept the upstream parts of the glacier in check. When that grounded ice is removed, it’s as though the brakes suddenly came off. 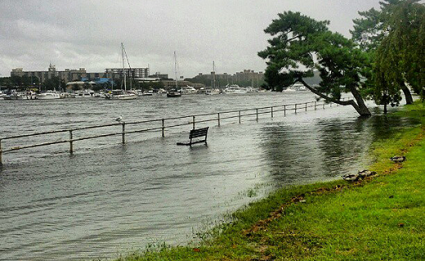 Even if sea level goes up by only half as much originally anticipated, the combination of rising seas and periodic storm surges could devastate coastal areas around the world.
Credit: flickr/Bruno Sanchez-Andrade Nuño

Warmer air temperatures, meanwhile, melt ice on top of the glaciers, and on the massive ice sheet they flow out of. In the summer of 2012, in fact, for the first time in more than a century, virtually the entire surface was at least partially melting for a few days in July (the reason, some scientists believe, was not just warmer-than-normal air temperatures overall, but also the heat-trapping effect of thin clouds).

Eventually, all of this water flows to the sea, but along the way it funnels down into crevasses in the ice, which can help lubricate the ice-rock interface at the bottom, letting glaciers flow faster. Downflowing water can also widen cracks in the ice, Nick said, which can enhance disintegration of the glacier’s leading edge already weakened by the warming ocean.

Feeding all of these effects into their model, the scientists found that speedup in the flow of glaciers into the sea is something to be expected in a generally warming climate, but that it won’t simply get more and more pronounced. “You see a big jump,” Nick said, “and then it slows down again.”

Editor's Note: The headline of this article has been changed to reflect the fact that the study concerns projections of future glacier melt rates, and not, as the previous study indicated, observations of a recent slowdown.