Climate-friendly, low-carbon renewable energy used in the U.S. isn’t just wind and solar. Renewable or “green” diesel fuel made mostly of plant oils, algae or animal fat is considered to be in that category, too.

But after briefly being a hit in the U.S., the use of green diesel in the U.S. is declining as imports from overseas plummet, at least for now, according to a new report from the U.S. Energy Information Administration. 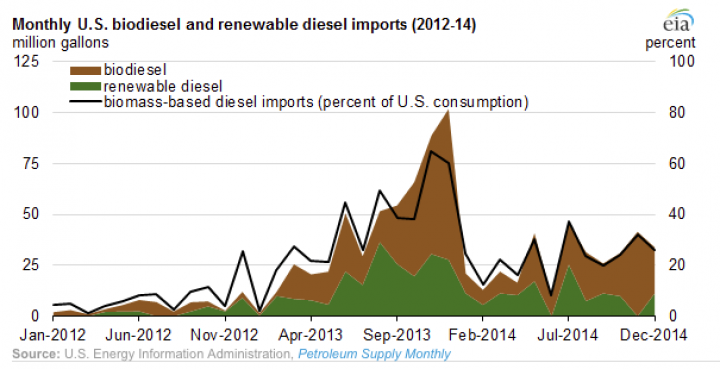 2013 was a record year for green diesel in the U.S. as imports flooded in and demand spiked. It was temporary, though, as federal mandates for the use of biomass in liquid fuels weakened last year, contributing to a greater than 40 percent fall in green diesel imports in 2014.

Green diesel is only a tiny player among transportation fuels in the U.S., making up less than 1 percent of all the diesel fuel burned here, but it’s a significant one because it can be used just like diesel made of petroleum.

It’s also more climate friendly than the real thing because it burns more cleanly, emits less carbon dioxide and is made made entirely of non-petroleum plant oils, animal fats, municipal solid waste and other renewable biomass. It’s different than the more common biodiesel, which is a blend of petroleum and plant products.

Diesel that comes from biomass has a higher energy content compared to fuels using ethanol, allowing diesel refiners to more quickly meet targets mandated under the U.S. renewable fuel standard. The standard is a requirement, created by Congress in 2005 and reset every year by the U.S. Environmental Protection Agency, for how much biomass must be included in liquid fuel.

Green diesel is more valuable than biodiesel because it has an energy content roughly equivalent to petroleum diesel, generating more renewable fuel credits than biodiesel under the standard, EIA analyst Sean Hill said.

“Renewable diesel is particularly valuable in complying with the renewable fuel standard,” he said. 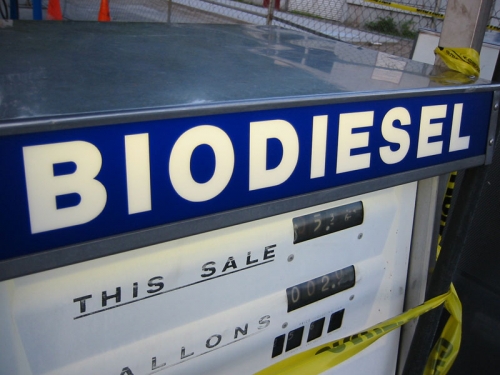 Biodiesel is a petroleum-biomass blend, whereas green diesel, or renewable diesel, is made without petroleum products. Credit: Rob E/flickr

Green diesel makes up about 10 percent of all alternative diesel fuels used in the U.S., which gets at least 90 percent of its green diesel from overseas, mostly from Singapore, Hill said.

Both green diesel and biodiesel imports and use spiked in the U.S. in 2013 because of greater availability from other countries and a boost in demand in the U.S. after the renewable fuel standard was increased. The EPA increased that standard between 2012 and 2013, but backed off in 2014. The standard for 2015 has yet to be set, but the EPA projects it may be updated in May.

But when a biodiesel tax credit expired, overseas availability of biodiesel dried up and as uncertainty grew about whether the EPA would boost the standard, imports of renewable diesel fell 42 percent last year and biodiesel imports fell 36 percent after setting a record in 2013.

Hill said it’s unclear what direction green diesel use will take this year, but it depends how the renewable fuel standard will be set for 2015, something that won’t be announced until later in the year.

At the very least, green diesel use and imports will remain the same as in 2014, he said.