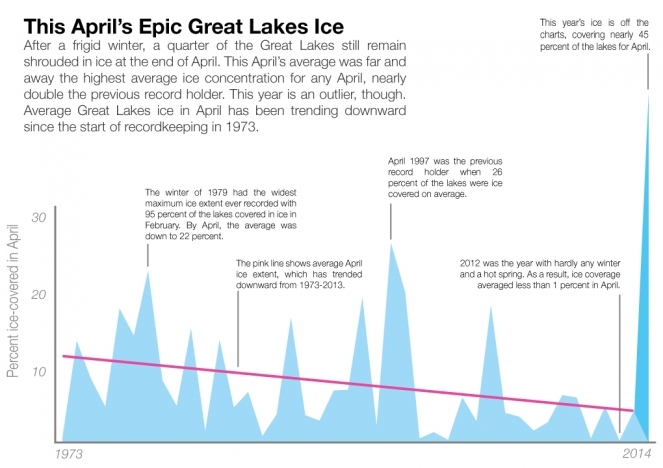 April has come and gone but a record amount of ice still remains on the Great Lakes. This April was the lakes’ iciest on record after a near-record winter, and the season has been notable for how early ice formed and how long it’s lingered.

At the close of April, nearly a quarter of the five Great Lakes — the largest group of lakes on Earth — still have ice on them and ice is likely to linger for weeks to come according to the Great Lakes Environmental Research Laboratory. That makes the month far and away the iciest April since recordkeeping began in 1973.

Cold fall and winter temperatures in the region were some of the main ingredients shaping the winter’s icepack. According to the National Climatic Data Center, Illinois, Indiana, Michigan, Minnesota, and Wisconsin — the states surrounding the Great Lakes — each had one of their 10 coldest October-March periods on record. That helped ice form in November, a few weeks ahead of schedule. Over the winter, repeated incursions of Arctic air dipped into the region, providing the cold fuel for ice to race across the lakes.

Visitors and residents of the region used the wide ice extent to visit ice caves near the Apostle Islands. The caves are rarely accessible in winter because ice isn’t usually thick enough to support foot traffic, forcing visitors to wait until summer to visit them by boat (at which point they’re just plain old caves).

Ice cover peaked on March 6 at 92 percent, just shy of the record of 95 percent set in the winter of 1979-78. That winter, ice cover peaked in mid-February, which is more typical.

The late peak in March this year helped ensure a huge amount of ice remained on the lakes at the start of April. On April 1, 69 percent of the lakes were still locked in an icy grip, a record for that date. Temperatures that were up to 15°F below normal through the first three weeks of April have ensured record high amounts of ice remain. On April 30, 23.5 percent of the lakes were still under ice, with the highest concentrations of ice on Lake Superior, the largest of the five lakes.

Don’t expect a repeat next year, though. Overall, winter ice cover has declined 71 percent from 1973-2010 as air and water temperatures have warmed considerably over that period. Winters in the Upper Midwest have warmed 1.12°F per decade since 1970, making it the fastest warming region in the country. Those trends are expected to continue through the 21st century with temperatures possibly rising another 5.4°F by 2050. There could also be 22 fewer freezing days per year by mid-century, drastically decreasing the odds of a year like this one.

In the meantime, ice is likely to linger on the lake through May. That could affect weather patterns as cold water is less likely to evaporate and could inhibit storms downwind according to Accuweather. Capital Weather Gang examined summer temperatures examined summer temperatures following the five highest ice years on the Great Lakes and found that they were below normal for much of the Midwest and Mid-Atlantic. The high ice extent played less of a role in the cool summer temperatures, though: rather it was indicative of the larger-scale weather pattern that helped the ice form in the first place.

You May Also Like
Extreme Rainfall Events Like Pensacola’s On the Rise
Epic Rains Deluge Florida Panhandle & Parts of Alabama
April Becomes 1st Month With CO2 Levels Above 400 PPM
Despite Spate of Tornadoes, 2014 on Track for Low Total