There was good news and bad to be mined from a state-by-state analysis of carbon emissions over a decade, which was released this week by the U.S. Energy Information Administration (EIA).

How each state ranks depends on several factors. Texas, for example, has been the nation’s biggest carbon emitter for years, but it also has the country’s largest overall drop in carbon emissions since 2000. In contrast, Delaware had the biggest percentage decrease in emissions during the past decade (30 percent), but it is also the third-smallest emitter in the U.S. overall, so that decrease isn’t particularly important on the national level. 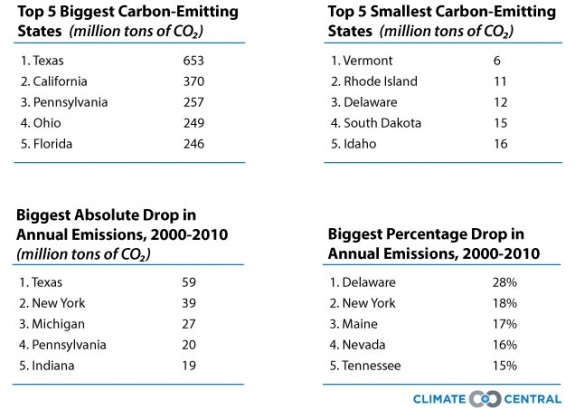 The amount of carbon dioxide each state emits from its energy use depends on many things, including the population, the climate (very cold and very warm states use a lot of energy for heating and air conditioning, respectively), and manufacturing and other economic activities. What fossil fuels are used in the state also matter. Burning coal produces more carbon emissions per unit of energy than oil, which in turn produces more than natural gas. And states with many people driving long distances end up with lots of carbon emissions from burning gasoline.

The EIA analysis looked at carbon emissions that came from gas-powered cars and coal and gas-fired electricity generation, but it also included emissions from any fossil fuel burned in homes, businesses and industry.

Here’s a look at what the new EIA data show about the top five biggest emitters.

the bad news: Texas has long been the biggest CO2 emitting state in the country, producing more than 650 million tons of CO2 each year. That’s nearly double the next biggest-emitting state, California.

the good news: Texas’ energy-related carbon dioxide emissions have shrunk by about 8 percent since 2000 and during that time, it’s been relying on less carbon-intensive forms of energy. On a per capita basis, Texans produce only slightly more emissions than the national average.

the bad news: As the nation’s most populous state, California emits the second-largest amount of carbon dioxide from its energy use. In 2010, California produced nearly 370 million tons of CO2 and more than half of that came from the transportation sector.

the bad news: With nearly half of its electricity generated from burning coal, Pennsylvania is among the worst states in terms of how much carbon emissions come from its electricity sector.

the good news: Since 2000, Pennsylvania has seen the fourth-largest drop in overall energy-related carbon emissions, which have dropped by more than 7 percent.

the bad news: Ohio has the nation’s second largest carbon-emitting electricity sector, with nearly 80 percent of its electricity coming from burning coal.

the good news: Over the past decade, Ohio has decreased its overall carbon emissions by more than 5 percent, slightly more than the national average.

the bad news: Florida’s energy-related carbon emissions topped 240 million tons in 2010, which is nearly 3 percent larger than it was 10 years ago (most states have decreased their energy-related emissions over that same time).

the good news: Florida has the ninth-lowest per capita emissions and, like most other states, Florida has seen an overall decarbonization of its energy supply over the past decade.