Another month, another record.

On Monday, NASA released its latest monthly temperature data for the globe. And it’s perhaps no surprise that this November was the warmest on record for the planet. The Japan Meteorological Agency’s dataset also shows the same record warmth for the month. (These stories seem to write themselves, don’t they?) 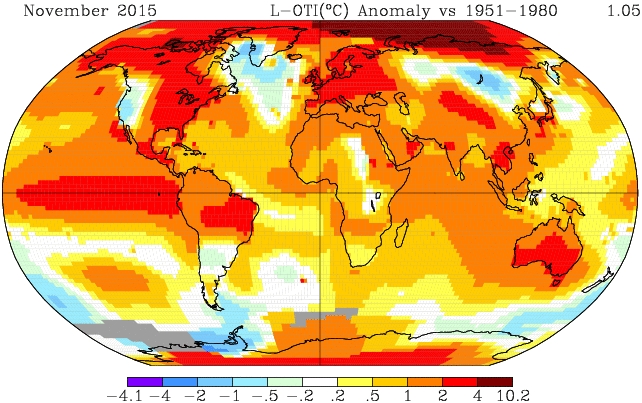 November marks the second month in a row the global average temperature was more than 1°C (1.8°F) above the 1951-1980 baseline period NASA uses. October and now November are the first time in NASA’s dataset that a given month has been a full degree Celsius above average.

There’s a telltale sign of El Niño with warmth in the tropical Pacific. But the Arctic is where the real departures from normal were in November. Seriously, look at the map above and the corresponding scale. Temperatures were as much as 18°F (10°C) above normal in the Arctic and parts of Russia. NASA climate chief Gavin Schmidt said it’s not that abnormal for monthly departures to be that high in a given location, but it’s a solid reminder that the Arctic is one of the world’s fastest warming regions.

With November’s new record, the probability of this year being the record hottest year is now greater than 99.999 percent. In laymen’s terms, that means it’s as likely to be a record setter as it is for the sun to rise tomorrow.

With Nov update to GISTEMP, probability of 2015 being a record year is > 99.999% pic.twitter.com/eotioDrFSC

Of course, it’s been pretty clear for awhile that 2015 would take the record of hottest year, only allowing 2014 to hold the record for 12 months. For months, the question instead has been just how hot 2015 will end up being.

Now with the two of the most anomalously warm months ever recorded, the answer is “by a lot.” This year will mark the first time that the annual global average temperature will be 1°C above pre-industrial levels.

The extreme El Niño warming the tropical Pacific has had some influence on the planetary heat. But the main driver has been the accumulation of greenhouse gases in the Earth’s atmosphere, according to an analysis by Climate Central and its partners. 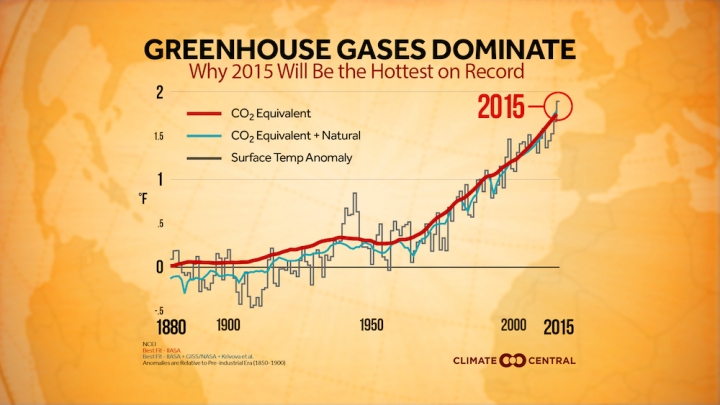 A graph showing how much greenhouse gases are dominating global temperatures compared to natural causes. Almost all of 2015's record heat is due to human influences on the climate.
Click image to enlarge.

The heat this year has contributed to heat waves, caused a global coral die off and lent a sense of urgency to the climate talks in Paris last week. That the globe will have its warmest year on record only underscores how important the climate agreement struck in Paris will be to avoiding dangerous climate change.

There’s a lot of work to do, though. Carbon dioxide records are at record highs and likely won’t dip below the symbolic 400 parts per million threshold in our lifetimes. That means even with the world’s best efforts to cut carbon dioxide and other greenhouse gas emissions, this probably isn’t the last time you’ll see a story about record heat.