By Douglas Fischer, The Daily Climate

YELLOWSTONE NATIONAL PARK – If you've hiked in the Northern Rockies above 9,000 feet, you've hiked among a whitebark pine forest.

And if you've hiked in the Rockies since 2009, you've likely hiked through a dead and dying forest, felled by a widespread outbreak of the mountain pine beetle. 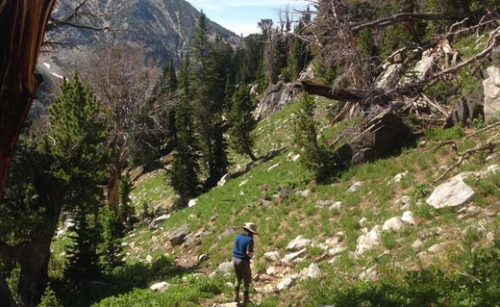 At a scientific conference Tuesday at Mammoth Hot Springs, near Yellowstone's northern boundary, biologists cited climate change as a major driver. From the 1980s to today, temperatures have only gone one direction: Up.

The death is a major concern for conservationists, biologists and public land managers, for the whitebark pine supports the entire ecosystem. Bears, jays and other forest creatures depend heavily on pine seeds for their diet.

Without the seeds, biologists fear what's called a “trophic cascade,” where the entire food chain shifts as a primary producer drops out.

The greater Yellowstone ecosystem, an area the size of South Carolina sprawling for 31,000 square miles across Montana, Wyoming and Idaho, has been hit particularly hard by beetle outbreak.

Since 2009, more than 95 percent of the large trees in the region have succumbed to pine beetles.

“We view this as the stage-setting event that has allowed more beetle events,” said David Thoma, a National Park Service ecologist studying factors behind the beetle outbreak. “Temperature is the primary driver.”

Warmer temperatures allow the beetles to overwinter. Until the late 1990s, winter temperatures in the high country were inhospitable. Thirty years' of warming has left whitebark pines exposed to a threat they rarely saw.

Not all news is bad, however.

Some trees have proved resistant to outbreaks. Others grow in pockets, or “climate refuges,” that for various reasons have protected trees from the beetles. Thoma sees such areas – also known as “microrefugia” – as essential for any management efforts going forward.

“The concept of microrefugia is reason for hope,” Thoma said. “This is particularly important for managing the landscape in the new beetle norm.”

And the prehistoric, or “paleo,” record offers some clues that the tree is hardier than researchers suspect. Charcoal and ancient pollen records suggest the niche space needed by whitebark pine is much larger than models estimate.

“In the warmest periods, the whitebark pine was really pretty happy,” said Cathy Whitlock, MSU director of the Montana Institute on Ecosystems who led the research team. 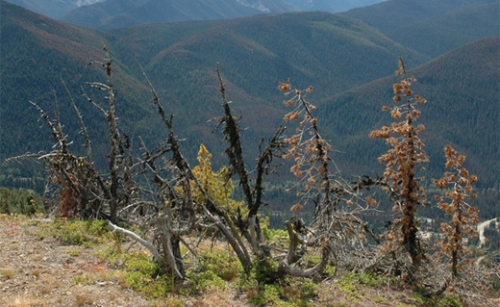 Scientists fear the loss of such a foundation species as the Whitebark pine could trigger a cascade of change that fundamentally alters the forests in western U.S.
Credit: Darren Barefoot/flickr

“The paleo perspective gives you really good insight,” she added. “We look a lot at the present . . . , but it doesn't give you perspective to look at climate change.”

Logan isn't so confident. An entirely new temperature regime could impair the species' ability to return as it has after past beetle outbreaks. “It's hard to image that these forests are going to recover in any sort of a meaningful time frame,” he said.

It won't be for lack of trying: U.S. Forest Service researchers are breeding trees resistant to drought and blister rust, another affliction destroying stands. The agency planted almost 350 acres of rust-resistant whitebark pine in the greater Yellowstone ecosystem this year, part of an ongoing 15-year effort to help the species, said Mary Frances Mahalovich, a Forest Service geneticist.

But two-thirds of the whitebark pine forest in the Yellowstone region grows on land protected by either wilderness status or a national park boundary – regions where intensive management is often anathema.

“If we're going to do some management, we need to do some thinking about what wilderness means,” Logan said.

And in the end, with temperatures projected to rise beyond even worst-case scenarios, microrefugia and beetle resistance might prove temporary.

Polly Buotte, a graduate student at the University of Idaho, has modeled beetle outbreaks, whitebark pine mortality and projected temperatures. The warming signal, she said, is “pretty clear.”

“We as a society need to reduce emissions or these refugia are just going to become hospices for whitebark pine,” she said.