The plight of Buffalo, socked in under feet upon feet of snow, has entranced the country. Social media lit up with mind-boggling pictures of the snow-buried landscape, from hundreds of cars trapped on the highway to doorways blocked by walls of snow.

While Buffalonians are no strangers to large amounts of snow that the lake effect (so called because the lake provides the moisture that fuels the snow) can bring, but even this was a little much for them.

“This is definitely one of the strongest lake bands that we’ve experienced,” Judy Levan, the warning coordination meteorologist with the National Weather Service office in Buffalo, said. “It’s definitely in the top five.”

And it’s something Buffalo could face more often in a warming world. Rising global temperatures are also warming the Great Lakes and keeping them ice-free longer during the cold season.

Snow was still falling in the Buffalo area on Friday morning, the tail end of the second bout of lake effect snow for the area in a week. The first storm on Tuesday left the worst-hit areas, all just south of the city proper, with up to 65 inches of snow.

After a brief reprieve in which emergency workers were able to dig out those stranded in cars, a second band of snow swept in late Wednesday night and hit some of the same areas already literally up to their necks — or higher — in snow. As of Friday morning, a small area around the town of Hamburg had 70 inches or more. Even in a snowy place like Buffalo, that’s a full year’s snowfall in a matter of days.

Lake effect snow is notorious for being able to dump large snow totals in a short amount of time. The phenomenon is a product of temperature differences, specifically between the cold air and the relatively warm lake waters over which that air blows. As winds blow over the lake, the water evaporates into the cold air, warming it in the layer above the lake. The warm air rises, cooling as it does so, and if it cools enough, the water freezes and falls as snow.

Part of the reason some places got so much this week was because the temperature difference during this event was so strong, with unusually bitter temperatures for November, and water in Lake Erie that still retained much of summer’s warmth. 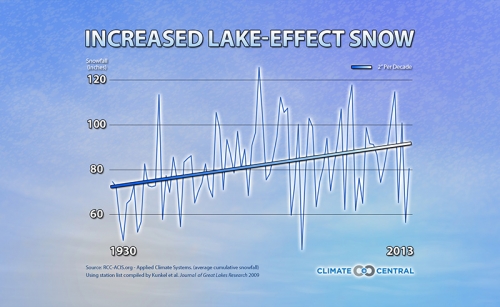 The trend in lake effect snow across the Great Lakes.
Click image to enlarge.

Another reason for the surplus of snow? The swath of snow stayed in the same place pretty much all day, continuously dumping 4-5 inches an hour on the worst-hit places. Also, the winds were optimally (depending on how you look at it) oriented, blowing in from the southwest and traveling the entire length of the lake, Levan said. This enabled the air to soak up more moisture.

But as the world warms, the period where cold late fall and early winter air overlaps with warm waters could grow longer because waters in Erie and the other Great Lakes are warming. That’s keeping them ice-free for longer in the season, which means the air has more opportunity to blow over and create lake effect snow.

“We’re looking at a lot more of it to fall in the wintertime,” Levan said.

Adam Burnett, of Colgate University, has looked at the issue of how warming might impact lake effect snow around the Great Lakes. In a 2003 study, he and his co-authors found that there should be an increase in such events. But in the decade since, “things have changed a little bit,” he said. 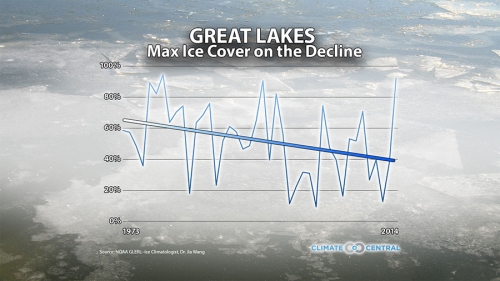 The trend in ice cover across the Great Lakes. Click image to enlarge.

While the warming of the lakes could indeed mean more potential for lake effect snow, it all depends on how and where the winds blow. For example, the wind direction in this event meant that the areas to the south of Buffalo bore the brunt of the storm, but in other events where the wind is blowing differently, the city of Syracuse can be the one seeing all the snow, Burnett said. Predicting how the circulation of the atmosphere might change with warming has been a much-debated topic, and one that hasn’t produced any clear signals for the future.

Looking at records going back to 1950, “there are places where lake effect snow has increased and other” places where it hasn’t, Burnett said. But the potential for more is still there.

Another complication is that climate models show that the trend for more snow may not last long. Those models show that eventually “the atmosphere gets too warm to support the snow,” Burnett said. The Upper Midwest, in fact, is the fastest warming region of the U.S. in the winter months.

But, “in the short run, we could potentially be getting things like this,” Burnett said, referring to snowbound Buffalo.