Despite a recent influx of snow and rain this past weekend, extremely low snowpack in the Sierra Nevada has conspired with warm temperatures to keep the state in the grips of one its worst droughts on record for at least another year.

The precipitation has been the key ingredient to start the drought, but heat has played an important role in maintaining and intensifying it. A new paper published Monday in the Proceedings of the National Academy of Science shows that human greenhouse gas emissions have helped increase the odds in favor of warm, dry conditions for the Golden State. More ominously, the results suggest that by 2030, the warm weather driving the current drought could become a yearly occurrence. 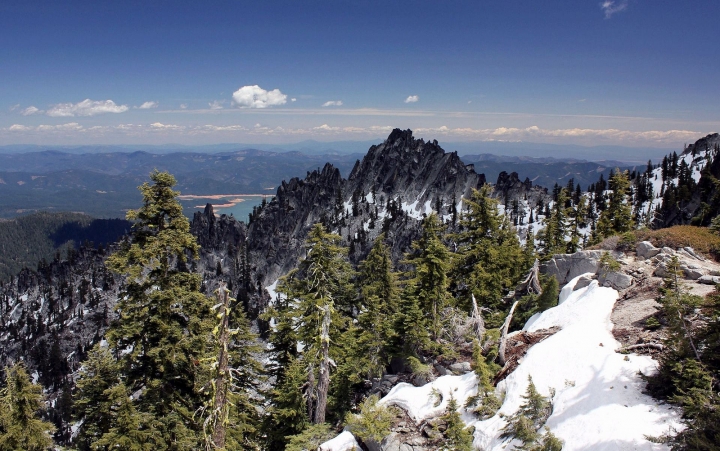 A view from Monument Peak Ridge in the Trinity Alps taken in May, 2014. Trinity Lake, one of California's largest reservoirs, is in the distance with a noticeable bathtub ring.
Credit: Gary Robertson/Flickr

The current California drought began at the end of 2011, when a failed rainy season sparked moderate drought conditions around the state. Since then, it has expanded and strengthened, with nearly 40 percent of the state in the most severe type of drought listed by the U.S. Drought Monitor as of last week. Record warmth has helped keep those drought conditions locked in place.

The hot, dry weather has had huge impacts from exacting at least $2.2 billion in agricultural losses to literally moving mountains as farmers have drawn down historic amounts of groundwater to supplement meager rainfall. Urban areas have implemented water rationing programs and some ski areas have been forced to stop their lifts as snow has all but disappeared in the Sierra Nevada this year.

Much has been made of the ridiculously resilient ridge, a block of high pressure that’s deflected storms to the north of the state. There have been hints of climate change in the ridge’s persistence but nothing conclusive about the drought.

The new research published in the Proceedings of the National Academy Science turns its eye on temperature as a confounding variable and finds climate change is much more definitively connected.

Diffenbaugh led the new research, which analyzed 20 moderate to severe droughts that are on record for California going back to 1896. Those droughts have occurred twice as often since 1995. Wet season precipitation hasn’t changed noticeably over that time period. The big shift has been temperature.

Prior to 1995, about half of all moderately dry years overlapped with warmer than average temperatures. But since then, every dry year has also occurred in a warm year. In general, 80 percent of the years since 1995 have been warmer than normal for California, a trend likely to continue into the future.

“It used to be flipping two coins independently and getting two tails one-quarter of time. Now we’re getting tails on the temperature coin much more often,” Diffenbaugh said.

By 2030, that coin is projected to land on tails 100 percent of the time as temperatures rise . Precipitation is projected to increase slightly through the end of the century, but warming could offset any gains by either switching snow to rain or melting snowpack earlier in the year. Earlier snowmelt is already occurring in the Sierra Nevada and other mountain ranges across the U.S. 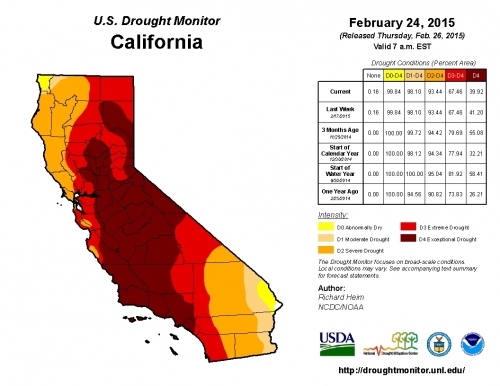 “We’re not arguing every year will be a drought year. But even without any change in precipitation, when low precipitation years occur, there’s 100 percent risk they’ll be occurring in warm or even extremely warm conditions,” Diffenbaugh said.

Park Williams, a researcher at the Lamont-Doherty Tree Ring Laboratory, said in many ways this was the most important aspect of the new paper and a reason to consider agricultural water use reform across the state.

“The current policies are horribly short sighted, and the projections of increased precipitation may act as an excuse for inaction,” Williams said. “(This paper) serves as a reminder that temperature is rising, and the projected continuation of warming is so extreme that California should prepare for an increased frequency of 2014-type water shortages, regardless of whether models project increased precipitation totals.”

At first blush, the analysis of the current drought might appear at odds with a recent analysis funded by the National Oceanic and Atmospheric Administration (NOAA), which showed the drought had its roots in natural causes.

“There is not really any inconsistency between the PNAS paper and our NOAA report,” Richard Seager, a researcher at Lamont-Doherty Earth Observatory and lead author of the NOAA findings, said in an email. “Our report focused on what caused the precipitation drop last winter (and the two before) which was the prime driver of the ongoing drought (as opposed to warm temperatures).”

Diffenbaugh also agreed that the two papers weren’t necessarily at odds, noting that, “the public watching the scientific process unfold in real time.”