Fifty years ago, the idea of reducing the amount of sunlight reaching the earth to address climate change officially entered the scientific and political vernacular. That concept has since been lumped under the banner of geoengineering with other hotly debated techniques that could help cool the planet.

Just five years ago, President Obama’s science advisor said that geoengineering has “got to be looked at.” On Tuesday, a report funded by federal agencies and released by the non-profit National Academy of Sciences (NAS) provided a detailed look at the state of geoengineering and suggests how the government could develop a program to better understand the consequences of further planetary tinkering, including small-scale tests. 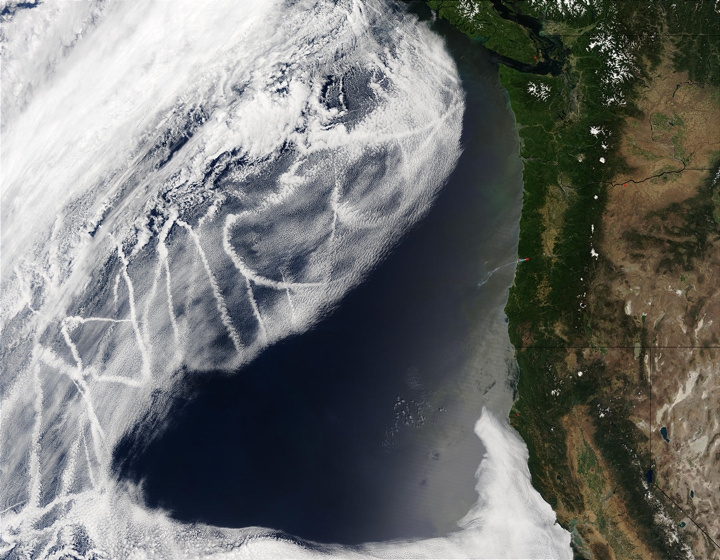 At the same time, it makes it clear that geoengineering — or what the report calls climate intervention — holds possibilities, but rapidly reducing carbon dioxide (CO2) emissions is still the most prudent and cost-effective way to address climate change.

The report is the first major report focused on geoengineering since 2009, when the British Royal Society explored the topic in-depth. The new NAS study provides the latest scientific insights and arrives in the wake of the hottest year on record and stalled climate talks held in Lima this past December. CO2 emissions have continued their rise and are on track to send the world well past its 2°C climate target.

“If CO2 emissions were declining rapidly, I don’t think there would be that much impetus behind dong a report like this. There’s a question about what would we do if things start getting worse, if climate change leads to some kind of crisis situation,” Ken Caldeira, one of the report’s authors and a researcher at the Carnegie Institute for Science, said.

The 400-page report is split into two volumes that chronicle the broad types of intervention: solar radiation management and CO2 removal. The former generally involves injecting aerosol particles into the stratosphere or brightening clouds to reflect sunlight. The latter basically relies on using trees, rocks, soil or technology to draw CO2 out of the air.

While they address the same problem of how to cool a warming world, they offer vastly different solutions and levels of risk.

“It’s a historical artifact, lumping these things together,” Caldeira said. “Some of these CO2-related things, like reforesting or using biomass energy, are much more similar to the type of things people are doing or considering doing in climate talks.”

Much of the volume on CO2 removal (or CDR in geospeak) is comparatively tame. The main issue with CDR isn’t the risks associated with it — though there are some, particularly with the safety of injecting CO2 underground — but rather the costs and the amount of time for CO2 removal to actually impact the climate, which is more on the order of a decade or more.

“There may well be more bang for scarce investment bucks from next-generation renewable energy production and storage than from speculative carbon-dioxide removal schemes,” Simon Nicholson, co-director of the Forum for Climate Engineering Assessment (FCEA), said.

Aerosols already help offset about 30 percent of human greenhouse gas emissions according to the report, giving the techniques at least a modicum of familiarity. The process would also likely draw global temperature down much quicker than CO2 removal.

But the drawbacks are high, including the possibility of stalling out major climate patterns such as the Indian Monsoon, forest die-offs, ripping a new ozone hole and the rebound effect, where if we had to stop injecting aerosols for some reason, the planet would rapidly warm. And those are just the risks scientists have identified. The biggest dangers could be what scientists haven’t been able to model: trickle-down effects like crop loss or political disruption to name just two.

The rebound effect is worrisome enough on its own, though.

“Let’s say a country like India is upset that its monsoon is shut down and threatens the world with nuclear holocaust. If there’s a build-up of CO2, you’ll have temperature increases that would be about 20 times what they would be under business as usual and it would have massive implications,” Wil Burns, Nicholson’s co-director at FCEA, said. Neither Burns nor Nicholson contributed to the report.

Because of these drawbacks, the report explicitly recommends not pursuing solar radiation management at this time on a climate-altering scale. But it does recommend getting a better handle on some of the processes that take place when aerosols are injected into the atmosphere or clouds are brightened through controlled real-world experiments.

“The report comes out clearly to say outdoor experiments will be useful. There was nobody saying it was better to stay ignorant. If these techniques are show stoppers, it would be good to know about that,” Caldeira said. 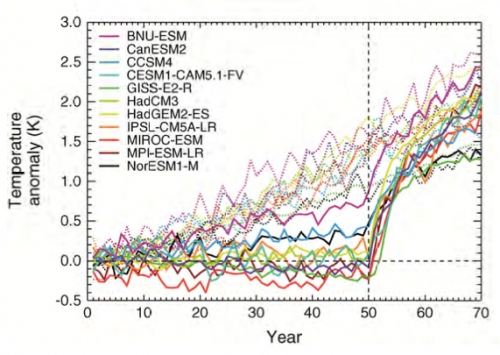 Stopping albedo modification could cause a sudden and dramatic rise in the global average temperature.
Credit: Jones et al., 2013

The report lands with a thud at a time when confidence in international climate negotiations is at a low. Delegates from around the world are set to draft a new climate agreement designed to keep the world from warming more than the 2°C climate goal at Paris later this year. But commitments to reduce emissions so far are nowhere near what’s needed to meet that goal.

In fact, current rates of emissions have the world on track to blow through the so-called carbon budget in three decades.

“When you start to look at the lay of land driving the international climate agenda, we’re not only going to see 2°C but 3°C, maybe 4°C of warming,” Burns said. “This is similar to the climate adaptation debate 10 years ago, when it was viewed as taboo. But adaptation has quickly became a major part of the climate agenda largely out of recognition that mitigation was not up to task of addressing the issue. The fact that we’re now seeing this could be a huge turning point.”

While geoengineering and the new report could spark discussions at the international level, the federal level may be a different story. Despite all the talk and strong opinions many have on the topic, geoengineering receives just a fraction of all U.S. climate research funding. Of the $4 billion spent on climate research through the U.S. Global Change Research Program in 2009 and 2010, just $100 million, or 2.5 percent, was spent on activities related to geoengineering, with just 0.1 percent going to solar radiation management.

Caldeira said that with climate being an already hot-button topic in the current U.S. political discourse, it’s unlikely that geoengineering would fare much better.

“I don’t see any politician who will see any benefit in winning an election and campaigning on funding a research program,” he said.

Focusing on geoengineering could also mean committing money to speculative ventures as opposed to more obvious solutions to climate change, such as bringing down the cost of renewables. In light of that, the report recommends focusing on pursuing research that can have co-benefits with other fields, such as cloud research and climate modeling, rather than launching a new research program specifically for albedo modification. Additionally, the report recommends beefing up the U.S. satellite fleet to monitor changes in the Earth’s reflectivity, which would also have co-benefits for monitoring crops, forests and cloud cover.

Ultimately, all these efforts are no substitute for the most straightforward methods the world has for avoiding dangerous climate change: reducing CO2 emissions and investing in adaptation to climate shifts already in the pipeline.

“To use football analogy, it would be similar to a Hail Mary with only 2 seconds on the clock. We hope our quarterback and coaches never put us in that place,” Marcia McNutt, chair geoengineering committee of the National Academy of Sciences, said. “What’s sad is that there isn’t even an opposing team. We can walk into the end zone right now with mitigation and adaptation.”

You May Also Like:
How Warming May Alter Critical ‘Atmospheric Rivers’
Winter Is Losing Its Cool
U.S. No. 2 to China in Clean Energy Investments in 2014
What If Sandy’s Surge Swamped Washington, D.C.?