Barack Obama, Angela Merkel and the other leaders of the world’s seven largest economies met in Germany for wide-ranging discussions on the state of the world on Sunday and Monday. Climate and energy were high on the agenda with concurrent climate talks happening in Bonn and major negotiations set for Paris later this year.

The G7 meeting has helped set the bar for Paris in a wide-ranging communiqué that outlines the future for the world's economy. 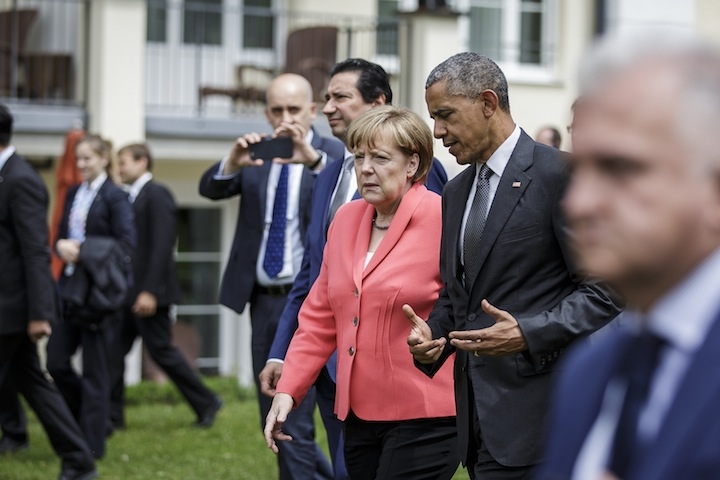 The document makes a historic commitment to stop pumping greenhouse gases into the atmosphere by century’s end, with a 40-70 percent reduction guidepost at 2050. While the call for decarbonization is some of the strongest language yet of how some of the world’s most powerful countries want to deal with climate change, there are few clues of how they plan to get there. However, the few clues that have emerged could give raise eyebrow about how serious the G7 leaders are about dealing with climate change in the present.

The Big News: Emissions Must Fall and Everyone Has a Role

Here’s the money quote from the G7 declaration:

“Mindful of this (2°C) goal and considering the latest IPCC results, we emphasize that deep cuts in global greenhouse gas emissions are required with a decarbonisation of the global economy over the course of this century.”

That means that the G7 leaders want to say goodbye to carbon as the driving force behind the economy. They also set a 2050 mark of reducing emissions 40-70 percent below 2010 levels.

The countries that comprise the G7 account for a third of global carbon emissions. So while their efforts are key, it’s clear both in the language of the document and the carbon calculus that all the world’s countries will have to get involved.

The cold, hard math of emissions cuts also indicates that for all the continued bluster about the 2°C goal, the current emissions reductions pledges — including those from G7 countries — are inadequate to reach it. What’s more, decarbonizing by the end of the century doesn’t necessarily keep global warming below that level. In other words, there’s a lot of ground to make up and while the desire to reduce warming — and all the impacts that come with it — is there, the mechanisms and political will currently are not.

Even getting that language into the document was a stretch. Canada and Japan both pushed back against it, which shouldn’t be too much of a surprise as both countries’ climate plans have been rated as inadequate. Canada also has vast oil resources in its tar sands, which represent a major boon to its economy (and global carbon emissions).

Gas Gets a Shoutout

Wind, solar and other renewable forms of energy seem like a slam dunk when it comes to reducing greenhouse gas emissions. Yet none of those are mentioned in the G7 document. Nor is any other specific form energy, save form one: natural gas. 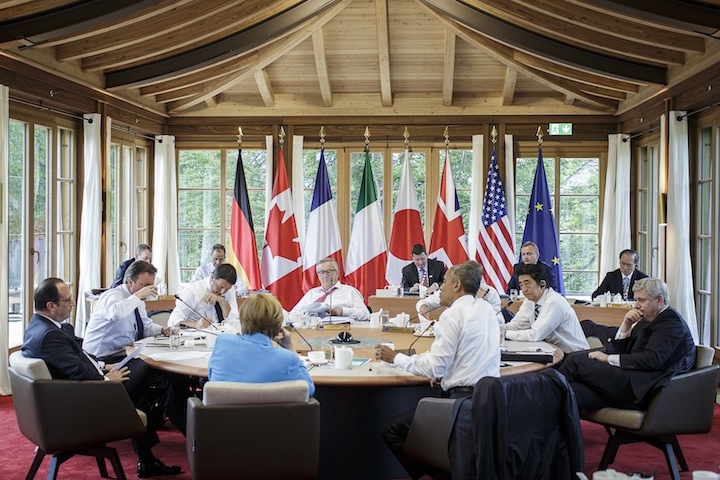 A working session at the G7 summit.
Credit: Bundesregierung/Denzel

Couple that with a recently published letter from “Big Oil” that asked for a carbon tax while also stumping for natural gas and you get the sense that major energy producers and economies alike see natural gas as a lower emissions bridge away from oil and coal.

Some research has questioned if natural gas is actually as big a bridge to clean energy as its proponents say. The biggest knock is that while natural gas burns cleaner than coal, enough methane, a potent greenhouse gas, could be leaking from pipelines and wells to negate any of those benefits.

Despite these questions, it’s becoming clearer and clearer that gas will have a role to play in combatting — or contributing — to climate change.

Money for the Climate Adaptation, Not Fossil Fuels

The G7 document signals a renewed commitment to meeting the $100 billion target for the Green Climate Fund while also pulling money out of fossil fuel subsidies.

The Green Climate Fund is a United Nations-run endeavor that aims to support developing countries as they adapt to the challenges climate change poses, while also helping them reduce their emissions. It currently has about $10 billion in commitments, but that’s a small percentage of the $100 billion goal the fund has set for 2020. The G7’s affirmation to reach that $100 billion goal is a strong signal to other countries as well as private donors of its importance.

Committing to end fossil fuel subsidies, which have reached an estimated $548 billion annually according to the International Energy Agency, could provide one pot of money to help with the Green Climate Fund. Whether that’s the case (and if those subsidies are indeed phased out) is another huge question.

You May Also Like:
Climate Change Poses a Brewing Problem for Tea
Here’s Why the Global Warming Hiatus Might Not Exist
Texas’s Warmer Future: Drought and Heavy Rains?
Climate Plan Will Transform How You Get Your Electricity