The Future of Mountain Glaciers Is Bleak

Melting ice in Greenland and Antarctica get far more attention, but mountain glaciers around the world — in the Rockies, the Andes, the Himalayas and other ranges — are melting as well as the planet heats up. All told, say climate modelers, the water they release could contribute about a foot’s worth of the 3 to 6 feet of sea level rise projected by 2100.

But those models only describe the melting of glaciers in the broadest terms — as an aggregate. Just like projections for global temperature increases, those broad-brush descriptions of how glaciers will melt don’t offer much useful information to people who now depend on them for water supplies and hydropower. 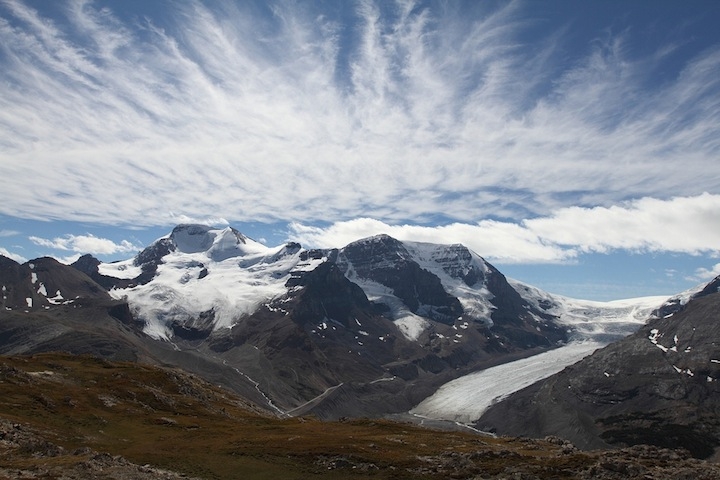 The Athabascan Glacier in the Canadian Rockies.
Credit: patrickw1/Flickr

Now a team of scientists, writing in Nature Geoscience, is describing a new modeling technique that could provide that crucial information. By combining regional temperature projections with detailed maps of the underlying topography, then adding in the physics of ice flow, the authors project not only that the glaciers of Western Canada will lose at least 70 percent of their volume by 2100 — a number more or less in keeping with current projections — but show exactly how every individual glacier will shrink. “This allows you to answer questions like ‘what will it look like when you go to Banff, or Lake Louise, in 2100,” lead author Garry Clarke, of the University of British Columbia, said in an interview.

More important, it allows planners to see how water resources will likely change as the world continues to warm. Unlike the snowpack in the mountains of California, for example, which waxes and wanes significantly depending on annual precipitation, glaciers are semi-permanent fixtures that store enormous volumes of water, releasing some of it to streams and rivers during the summer. According to Clarke and his co-authors, the Columbia River alone, which is fed primarily by British Columbia glaciers, provides about 5 gigawatts of power to the Pacific Northwest, or enough to provide electricity to more than 3 million homes. The authors don’t address the consequences specifically, but it illustrates just one aspect of how warming could affect millions of people in that part of the world.

The flow of water into Western Canada’s rivers and streams won’t decline right away, say the authors. In fact, summer stream flow will actually increase for a while as the glaciers’ ice turns to water. That flow will peak somewhere between 2020 and 2040, the new projections show. Then it will start to decline, as there’s less and less ice to melt. The effect will be most dramatic for inland glaciers, where more than 90 percent of the ice will vanish almost completely if greenhouse-gas emissions continue to grow unchecked. Coastal glaciers, where there’s more snowfall to replenish vanishing ice, will remain, but they’ll shrink to about 30 percent of their present size. “That’s the bad-guy scenario,” Clarke said. “It’s pretty much the path we’re on now.”

The authors also made projections based on the optimistic and ambitious assumption that emissions peak in 2020, then decline. “In that case, many inland glaciers would shrink, but they wouldn’t disappear. That’s the good-news side of the equation,” Clarke said. But that’s considered highly unlikely, even with new pledges by the U.S. to cut emissions.

Changes to glaciers through 2100 in parts of the Canadian Rockies and Coast and St. Elias Mountains under a high CO2 emissions scenario.
Click image to enlarge. Credit: Clarke et al., 2015

Either way, the projections could help local officials, residents and businesspeople make more informed decisions about investments in infrastructure, homes and businesses.

What makes this modeling technique truly valuable, writes Andreas Vieli, a climate scientist at the University of Zurich, in a commentary accompanying the new paper, is that it’s based on widely available data. “The methodology can therefore potentially be applied to a wide range of glacierized regions,” he writes, “or to reconstructions of past glaciations.”

Even better, the models can be tested for reliability in upcoming years by comparing them with satellite imagery. “It is,” Vieli writes, “an important step forward.”

You May Also Like:
One Image That Shows Future of Climate Models
Hydropower Could be Risky Bet in Warming World
Obama Announces Plan to Train 75,000 Solar Workers
Satellite Images Show Scope of Calif.’s Record Low Snow