Oil and natural gas fracking, on average, uses more than 28 times the water it did 15 years ago, gulping up to 9.6 million gallons of water per well and putting farming and drinking sources at risk in arid states, especially during drought.

Those are the results of a U.S. Geological Survey study published by the American Geophysical Union, the first national-scale analysis and map of water use from hydraulic fracturing operations. 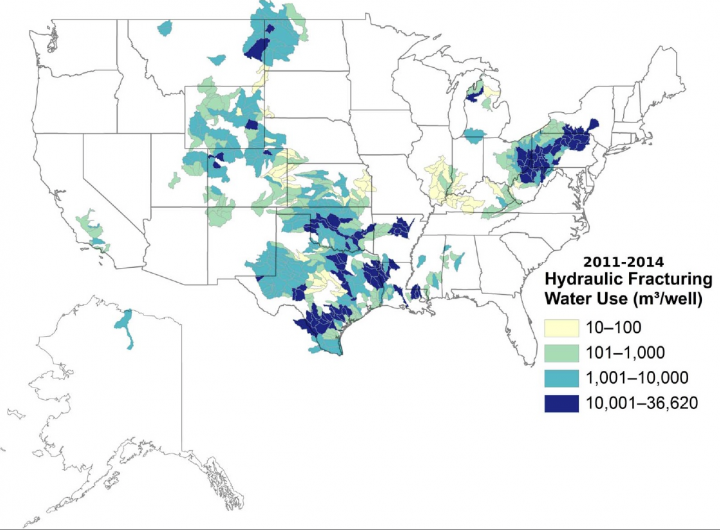 Fracking, which was banned in New York this week because of water pollution and climate concerns, injects large quantities of sand, water and chemicals into the ground at high pressure to release trapped oil and natural gas. The process has been found to leak large amounts of methane, a potent greenhouse gas, and the resulting fossil fuels are the primary cause of climate change.

Though fracking is used to produce natural gas in less-arid regions such as Pennsylvania, many of the nation’s fracking operations occur in places where water may become scarcer in a warming world, including Texas, the Rocky Mountains and the Great Plains — regions that have been devastated by drought over the last five years.

The amount of water fracking uses is small compared to the water needs of farming or power plant cooling, but in areas that have little water to begin with, fracking can strain water supplies.

“The reality is there is a pretty strong constraint on the amount of fresh water available,” he said.

Though some of the water used for fracking is recycled, most of it is disposed deep underground, almost entirely removed from the water cycle and never to be used again.

The study, released Tuesday, looked at water consumption used for fracking in all kinds of oil and gas wells, including traditional wells and “unconventional” wells, which usually tap oil and gas found in deep underground shale formations which were thought too expensive and impractical to drill until about a decade ago.

Variations in geology and the specific configuration of an oil and gas well are the biggest factors in how much water fracking consumes, the study’s lead author, USGS research engineer Tanya Gallegos, said. Natural gas wells often use more water than oil wells, especially gas wells that are horizontally drilled. In a horizontal well, the drill hole runs vertically deep underground, then turns to run roughly parallel to the surface of the earth. 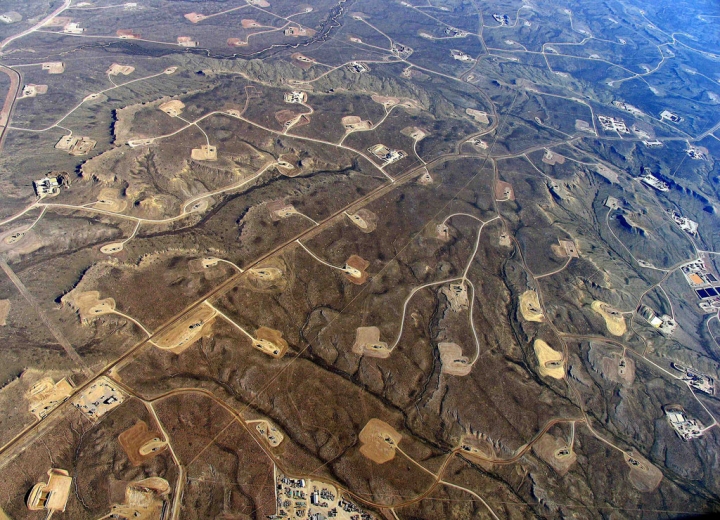 The USGS study shows that some of the regions using the most water for fracking are arid regions, and the amount of water each job uses is increasing quickly. Between 2000 and 2014, the average water used to drill a horizontal natural gas well increased from 177,000 gallons to 5.1 million gallons per well — enough water to fill more than seven Olympic-sized swimming pools.

Rob Jackson, a Stanford University professor of earth system science who is unaffiliated with the study, said the USGS research is more comprehensive than other studies about the water needs of fracking and clearly shows the spiking water intensity of oil and gas drilling and fracking.

“The water use for horizontal oil and gas drilling has doubled in the past five years per well,” he said. “In wet regions like the Marcellus (in Pennsylvania), I don’t think water use is that big a deal. In dry areas it can be a big deal. The strongest effects come through increased pumping of groundwater.”

Fracking can increase demand for groundwater by up to 30 percent in some arid regions, he said. “So, I think in arid counties, for groundwater consumption, this can be a major increase.”

You May Also Like:
NASA’s New Climate Projections, Now On the Cloud
Iconic Keeling Curve Designated a Landmark
The U.S., Brazil and China All Set Major Climate Goals