Fracking Hits Milestone as Natural Gas Use Rises in U.S.

More natural gas in the U.S. is coming from wells that have been hydraulically fractured than ever before, and fracking’s share of the country’s gas supply is continuing to rise, according to new data from the U.S. Energy Information Administration.

In 2000, only 3.6 billion cubic feet of gas came from fractured wells — roughly 7 percent of total U.S. natural gas production that year. About a third of the gas produced in the U.S. is used to generate electricity.

The natural gas and crude oil production boom over the last decade was enabled by fracking — the process of injecting large amounts of water, sand and chemicals into wells at high pressure to release crude oil and natural gas locked within solid rock, usually shale. 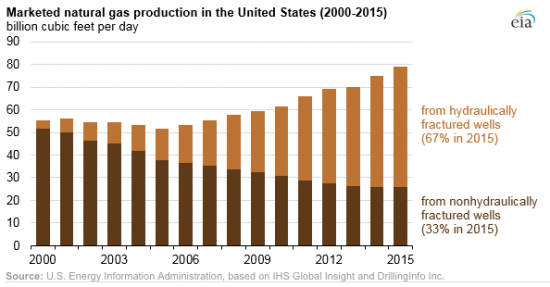 The boom led to the U.S. becoming the world’s largest producer of oil and flooded the market with natural gas, driving down prices. That encouraged utilities to build more electric power plants that run on natural gas instead of coal.

The shale gas boom is one of the main reasons that more electricity was generated with natural gas than coal for the first time last year, and 2016 is poised to be the first full calendar year that natural gas is expected to eclipse coal as the nation’s chief source of electricity.

Even though emissions are now about the same, natural gas contains more energy and can power more homes than coal.

“You almost get twice as much energy for the same amount of emissions,” EIA analyst Perry Lindstrom said. “For the amount of energy consumed, natural gas produces fewer CO2 emissions.”

Methane is about 86 times more potent than carbon dioxide as a climate change-driving greenhouse gas over a period of 20 years. A Harvard University study published in February showed that the U.S. may be responsible for up to 60 percent of the growth in global atmospheric methane concentrations, possibly because of the nation’s shale gas boom.

“If (methane) leak rates are any greater than tiny, there is probably not a climate benefit” to using natural gas, said Duke University atmospheric scientist Drew Shindell. “Fracking can be worse in some cases as sometimes small companies don't pay much attention to leaks, but the leak issue applied to all sources, storage, and transmission.”

You May Also Like:
March Continues Streak of Exceptional Global Warmth
Flirting with the 1.5°C Threshold
Warming Means Nicer U.S. Weather, But It Won’t Last
Second Warmest Start to the Year on Record for U.S.