Fracking May Be Polluting River with Radioactive Waste

Fracking may be contaminating a Pennsylvania river with radioactive waste, a Duke University study to be published this week shows.

Scientists found elevated levels of radioactivity in river water at a site where treated fracking wastewater from oil and gas production sites in western Pennsylvania’s Marcellus shale is released into a creek. 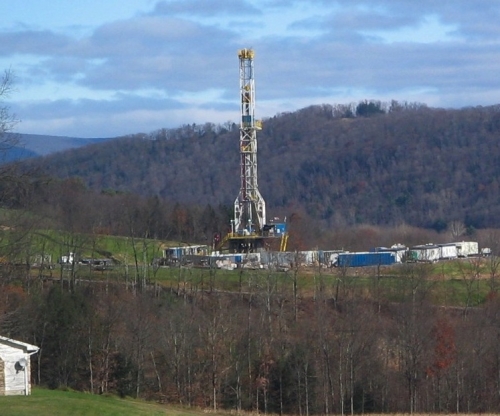 The natural gas-rich Marcellus shale is seeing a drilling boom, part of a nationwide rush to use hydraulic fracturing, or fracking, techniques to extract shale gas and oil. Studies have shown that energy production, including the waste water associated with fracking — a method of injecting chemicals, sand and water deep underground to crack rock formations to release oil and natural gas — may release significant fugitive methane emissions, helping to drive climate change.

Duke researchers looked at sediment samples collected downstream of the Josephine Brine Treatment Facility in Indiana County, Penn., and found that radium levels were 200 times greater in those samples when compared to those collected upstream of the plant. The plant processes fracking flowback water — highly saline and radioactive fluid that is returned to the surface as part of the fracking process.

Researchers have long been concerned about concentration of bromide, chlorides and other contaminants being discharged from the Josephine Brine Treatment Facility. One researcher, Conrad Volz, former director of the Center for Healthy Environments and Communities at the University of Pittsburgh, testified before the U.S. Senate in 2011 about the high level of contaminants in Josephine’s effluent.

“The treatment removes a substantial portion of the radioactivity, but it does not remove many of the other salts, including bromide,” said study co-author Avner Vengosh, a Duke professor of geochemistry and water quality.

Radioactivity levels were found to be elevated in sediment near the outflow from the plant, and they were high enough that only a licensed radioactive disposal facility is qualified to accept them, said co-author Robert B. Jackson, Duke professor of environmental science. Radioactivity has accumulated in the river sediments and exceeds thresholds for safe disposal of radioactive waste, he said.

Radioactivity found in the creek downstream of the fracking wastewater treatment plant is in low concentrations initially, but the study’s results show what happens when a large amount of fracking wastewater is treated in one location for a long period of time, said Jackson, whose previous research showed “systematic evidence” of methane contamination in drinking water associated with natural gas extraction in the Marcellus.

“Each day, oil and gas producers generate 2 billion gallons of wastewater,” Jackson said Tuesday. “They produce more wastewater than hydrocarbons. That’s the broader implication of this study. We have to do something with this wastewater.

“The use of fossil fuels has a direct climate connection,” he said. “Hundreds of billions of gallons of wastewater is a consequence of our reliance — our addiction — to fossil fuels. That’s another price we pay for needing so much oil and gas.

Cornell University environmental engineering professor Anthony Ingraffea, whose research has shown that climate change-driving methane emissions from shale gas extraction in the Marcellus may be significant, said methane concentrations could also be high in the fracking flowback wastewater the Josephine Brine plant treats.

“Entrained in that flowback is methane,” he said. “Even before that waste goes to a place like Josephine, it’s stored in open pits, or stored in vented tanks. As such, it’s going to off-gas, not just methane, but VOCs (volatile organic compounds).”

Ingraffea said the Duke study shows that one of the major problems with the rapid expansion of shale oil and shale gas development is that it requires an extremely high volume of water for fracking, which means there’s a high volume of waste associated with it.

“That waste has to be properly captured, stored, transported and, ultimately, disposed of,” Ingraffea said, something the Duke study shows Josephine and other wastewater treatment plants like it are not accomplishing.

The Duke study, “Impacts of Shale Gas Wastewater Disposal on Water Quality in Western Pennsylvania,” will be published this week in the journal Environmental Science and Technology.