One of the biggest criticisms of the oil and gas industry’s practice of hydraulic fracturing, or fracking, aside from its contributions of climate-changing greenhouse gas emissions, is that energy companies refuse to disclose some of the chemicals they use because they’re considered trade secrets.

In a move toward greater transparency, oil and gas services company Baker Hughes has changed its fracking fluid disclosure policy, saying it believes it’s possible to disclose 100 percent of the chemical ingredients used in fracking fluids without compromising any trade secrets so long as its customers and government regulators agree.

In a statement posted on its website, Baker Hughes, one of the globe's top five oil field services companies, said that complete disclosure achieves a “balance that increases public trust while encouraging commercial innovation.”

Baker Hughes spokeswoman Melanie Kania said Friday that the company’s website was updated in March to reflect the new policy.

“We are attempting to understand how it will be implemented and what it will mean in practice,” Halliburton spokeswoman Susie McMichael said in an email to Climate Central on Friday. “We will be examining the new Baker Hughes disclosure format once we see it and will be assessing its ability to protect proprietary formulas in the coming days and weeks.”

Advances in fracking and well drilling technology have brought about the shale oil and natural gas boom currently sweeping much of Pennsylvania, North Dakota, Texas, Colorado and other states where underground deposits of crude oil and natural gas were previously thought to be too expensive or difficult to tap.

To reach those deposits, energy companies inject up to 5 million gallons of water, sand and chemicals thousands of feet beneath the ground at high pressure to crack open the rock formations and release the crude oil and natural gas into the well above. 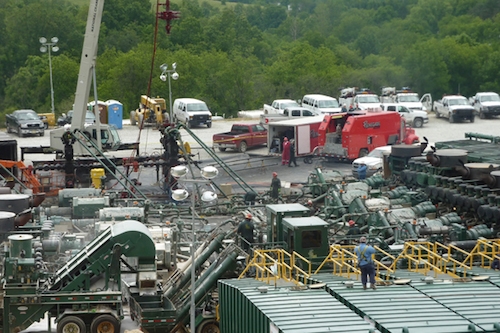 The use of those chemicals, including surfactants, biocides, hydrocarbons and others that are considered toxic, has sparked concern that they could contaminate groundwater by leaching into domestic water wells and drinking water aquifers.

While many companies disclose the majority of the chemicals used on the website fracfocus.org, some of the ingredients are considered proprietary trade secrets and are not disclosed to the public. A U.S. Department of Energy task force issued a report in March finding that 84 percent of all fracking operations listed on fracfocus.org invoked a trade secret exemption for at least one well, according to the Associated Press.

Some states, including Colorado, require energy companies to disclose the ingredients of proprietary chemicals to state officials if water has been contaminated or at the request of a doctor, but those chemicals are still not made public even in emergencies.

That concern led to a first-ever court victory this week for a family who sued an energy company for damages from fracking activities. A jury on Tuesday awarded nearly $3 million in damages to a Texas family for having their health and water quality suffer as a result of fracking nearby.

Other major oil and gas services companies operating in the U.S., including CalFrac and Schlumberger, did not immediately respond to requests for comment Friday about whether they would follow Baker Hughes in updating their fracking chemical transparency policies.