August is synonymous with sweltering summer heat, and that was certainly the name of the game for much of the country this year, temperature data released Wednesday shows. Those sultry temperatures helped two western states see their warmest summers on record, and could help push those and others to their warmest year on record. 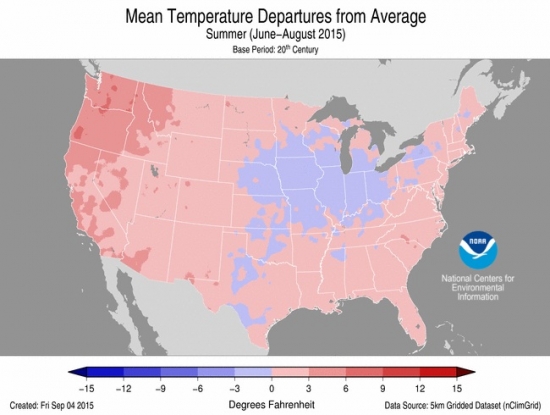 How temperatures departed from average during summer 2015 for the contiguous U.S.
Click image to enlarge. Credit: NOAA

August also helped bolster the average temperature for the contiguous states, which saw their 12th warmest summer and ninth warmest year-to-date in the last 121 years, according to the monthly data kept by the National Oceanic and Atmospheric Administration.

Such record warmth becomes more and more likely as the globe heats up thanks to the accumulation of greenhouse gases in the atmosphere.

Except for a relatively cool oasis at the center of the country (created by copious rainfall that helped keep temperatures down), most of the country had above-normal temperatures for August, as well as the summer as a whole. In particular, parts of New England, Hawaii and the Southern Plains roasted in sometimes-record heat during the month.

Two western states — Washington and Oregon —­ had their hottest summers on record, driven in part by stifling August weather. Those two states, along with California and Nevada have recorded their warmest January-August, and are poised to potentially see their hottest years ever.

“I think it's likely that 2015 will set the record for the warmest year on record for WA State,” Karin Bumbaco, assistant state climatologist for Washington, said in an email. Even if the rest of the year were simply average temperature-wise, 2015 would surpass the current record-holder of 1934 by 0.5°F, she said, and with a strong El Niño in place, it’s likely that temperatures will stay on the warmer side for the remainder of the year.

Kathie Dello, deputy director of the Oregon Climate Service at Oregon State University, said that since the year is only two-thirds over, it can’t be said for sure that Oregon will see its warmest year. 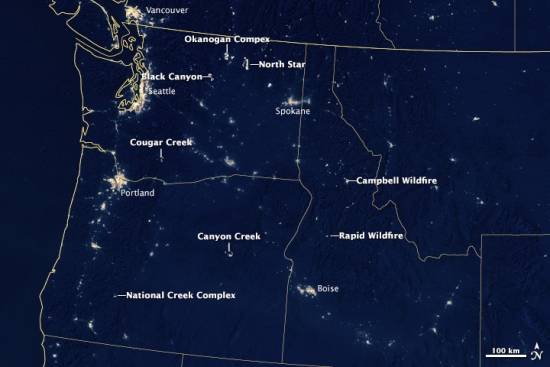 Wildfires raging across the Northwest during mid-August 2015, as seen by the Suomi NPP satellite.
Click image to enlarge. Credit: NASA

“There's still some time left, but with an El Niño and warm north Pacific, the warmest year on record in Oregon is certainly plausible,” she said in an email.

That  El Niño is also expected to make 2015 the warmest year on record for the planet as a whole, besting last year’s record. Global warming is helping to make such heat records more likely now, with 13 of the 15 hottest years in the books occurring since 2000.

That likely continuation of elevated temperatures keeps concerns about further drought impacts and wildfires fresh in the minds of western residents and officials. In August, the Okanogan Complex fire scorched more than 300,000 acres in Washington, the largest fire on record for the state.

Bumbaco said they are hoping fall rains begin sooner rather than later to help keep wildfires in check. Some cooler weather and rains in Oregon have helped ease conditions there somewhat, with fishing restrictions lifted across the state, but the heat is expected to begin again soon, Dello said.

Where the Lower 48 will end up on the year is much harder to tell, as El Niño tends to bring warmer conditions to the northern tier of the country, but cooler to the southern portions.

“So it is difficult at this time to say how the current El Niño will impact the contiguous US temperature for the rest of the year,” Jake Crouch, a NOAA climate scientist, said in an email. “However, the West has been so warm for 2015 to-date, I think that region will continue to dominate the contiguous US statistics.”

You May Also Like:
It’s After Labor Day, So Why Is It Still So Hot?
Climate Change Could Put Tribes’ Electric Systems at Risk
1997 vs. 2015: Animation Compares El Niños Side-by-Side
Summer Sea Ice Likely to Drop to 4th Lowest on Record