The European Union continues to march toward its renewable energy goals for 2020, but some countries aren’t content to wait until then to meet their targets. Newly released data show that four countries — Sweden, Bulgaria, Estonia and Lithuania — have met or surpassed their renewable energy target ahead of schedule, and two others are on the cusp.

Eurostat, a repository for data about Europe, provided its latest annual renewable energy report on Wednesday. The report covers all 28 countries in the European Union (EU) with data through 2013, assessing their progress on meeting goals to lessen reliance on climate change-causing fossil fuels. 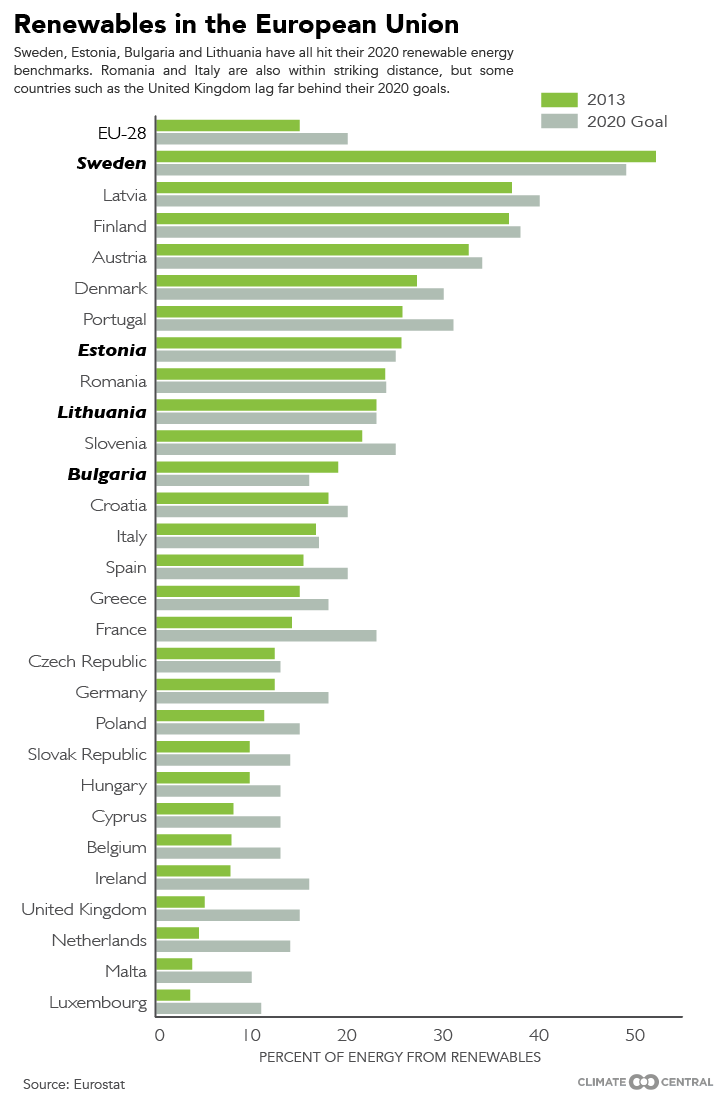 The report shows that Lithuania reached its goal in 2013, joining Sweden, Bulgaria and Estonia, which all beat their individual 2020 renewable goals in 2012. Italy and Romania are within a fraction of a percent of reaching their targets as well. And though they aren’t close to their goal yet, Austria, Finland and Latvia all generate a third or more of their electricity using renewables.

It’s not all good news in the Eurostat report, though. Some countries — notably the U.K., France, Ireland and the Netherlands — are well behind their renewables targets. Those countries account for 30 percent of the EU’s carbon dioxide emissions.

Though that might prompt finger wagging, the EU as a whole is still in pretty good shape. The 2013 data show the region gets 15 percent of its energy from renewable sources, well within striking distance of the goal of 20 percent by 2020.

The commitment to renewables fits in a larger EU goal for 2030, when it hopes to have reduced greenhouse gas emissions 40 percent below 1990 levels.

Much of the funding for clean energy in the EU comes from the region’s carbon market revenues. Of the $4.7 billion in cap-and-trade revenue in 2013, $4 billion was plunked into clean energy and climate-related programs.