Fossil Fuels to Dominate World Energy Use Through 2040

Global energy consumption will grow by 56 percent by 2040 with fossil fuels remaining dominant energy sources. Along with that growth will come increased carbon dioxide emissions and a continued reliance on  coal, oil, and natural gas for transportation and electricity generation, according to a new report published Thursday by the Energy Information Administration (EIA). The International Energy Outlook, which is released every two years, shows that strong economic growth in developing countries will be the dominant force driving world energy markets during that period.

“Rising prosperity in China and India is a major factor in the outlook for global energy demand. These two countries combined account for half the world’s total increase in energy use through 2040,” said EIA administrator Adam Sieminski in a press release. The EIA is the Department of Energy’s statistical and analytical agency. 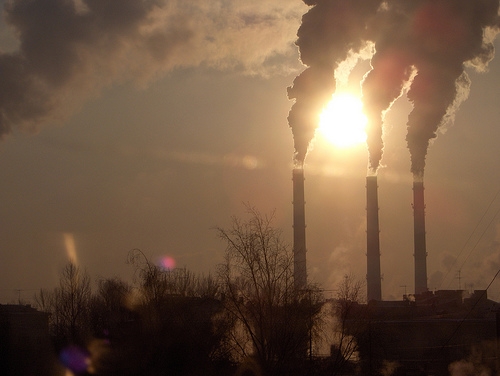 Energy use in developing countries, for example, is projected to increase by 90 percent by 2040, while industrialized nations will see a comparatively paltry increase of 17 percent. By 2040, China's energy demand is expected to be twice that of the U.S., the report projected.

“This is good news, this is rising prosperity,” Sieminski said at an energy event at the Center for Strategic and International Studies on Thursday. “The question is how do we accomodate rising prosperity and still maintain energy security and the environment?”

According to the report, renewable energy sources as well as nuclear power will be the fastest-growing energy sources during the next few decades, each growing at 2.5 percent per year, while natural gas will be the fastest-growing fossil fuel. However, in 2040, coal will remain the second-largest fuel source behind petroleum and other liquid fuels, assuming that governments do not enact new policies to limit the use of fossil fuels in order to rein in emissions of global warming pollutants, such as carbon dioxide (CO2). The EIA omitted potential policies from its analysis due to the uncertainties about whether, when, and how they will be implemented.

“The EIA tries to stay out of the business of forecasting policy developments,” Sieminski said at a press conference on Thursday.

Importantly, though, the report projects that, despite robust growth in renewables, fossil fuels will continue to supply nearly 80 percent of world energy use through 2040.

It's predicted that in 2040, coal will remain the second-largest energy source worldwide, with a greater reliance on coal seen in developing countries such as China and India compared to industrialized nations. The report projects that coal’s share of world energy consumption will stop growing during the next decade, and will decline after 2025, due in part to government policies that have already been put in place to encourage the use of cleaner-burning fuels, as well as market developments that have made natural gas a cheaper fuel for generating electricity. 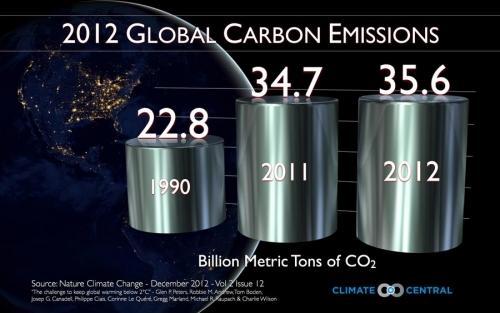 Manmade emissions of carbon dioxide in 2012 likely reached 35.6 billion tons. That’s up 2.6 percent from what was emitted in 2011, the previous record.
Click image to enlarge. Credit: Climate Central

The report projects that the greatest growth in nuclear power will take place in China, India, and South Korea, with China accounting for more than 40 percent of the global net increase in nuclear capacity. “The China story is an interesting one,” Sieminski said. “This is going to be a reach and a stretch I think for China to do this and to manage it.”

Compared to the last International Energy Outlook, released in 2011, this report projects greater growth in coal use. That has important implications for global warming, since coal-fired power plants are one of the biggest sources of carbon emissions, and studies show that the timing of emissions reductions are critical to determining how much warming the planet will experience during this century.

While coal’s share of the world energy market will be on the wane by 2040, the report shows an upward trajectory for natural gas, thanks to new technology, such as hydraulic fracturing or “fracking,” that allows companies to access previously inaccessible supplies. The report projects a 64 percent increase in natural gas consumption by 2040, with the vast majority of that coming from the industrial and electric power sectors.

In addition to potential greenhouse gas regulations at the national and international levels, the report cautions that the projections contain a number of other uncertainties, including the ramifications of the political unrest in the wake of the Arab Spring, which have temporarily raised oil prices, the anemic economic recoveries of many Western nations, and slowing economic growth in China and India.