Production of coal, oil and gas in the U.S. is on the decline in more than 600 million acres of public land, long a battleground over energy development because of concern about their possible environmental and climate impacts.

Fossil fuel production is booming across the U.S., but public lands — national parks, monuments, forests, wildlife refuges and the like —  are seeing oil, gas and coal production decline because most of the oil and gas deposits fueling the boom are on private lands, according to a new U.S. Energy Information Administration report. 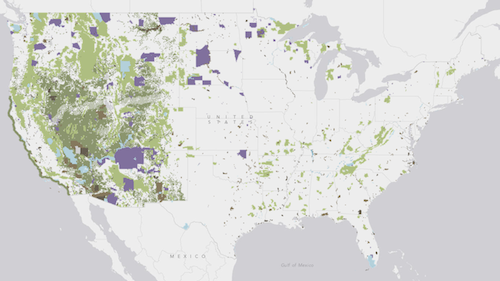 Development of fossil fuels  — the biggest drivers of climate change — has long been big business on public lands at the same time as those lands have been vital to the economic and biological diversity of much of the U.S. and a bellwether of a changing climate.

Fossil fuels production on public lands has been declining for a decade, and that decline has sharpened since 2010, dropping 7 percent in 2013, according to the EIA’s report.

The decline is occurring in part because the energy boom sweeping the U.S. today is happening in areas where public lands are sparse. Though Colorado has millions of acres of public land that have long been used for fossil fuels extraction, the state’s shale oil and gas boom is occurring mainly in northeast Colorado, where there are few public lands. Likewise for the Bakken and Eagle Ford shale oil booms in North Dakota and Texas and the Marcellus shale gas boom in Pennsylvania. 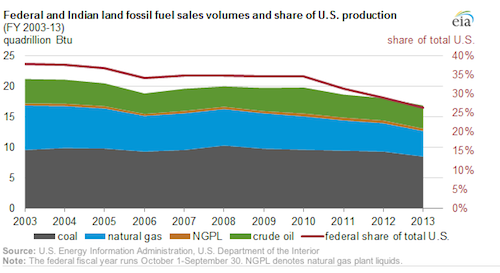 The graph shows the decline in sales volumes of fossil fuels produced on federal public and Native American lands nationwide since 2003.
Credit: EIA

“When they were exploring for natural gas, much of that was on public lands,” Ray Rasker, executive director of Headwaters Economics, a Montana-based nonpartisan economics research group focusing on public lands in the West, said. “Petroleum resources are on private lands. A coincidence of geology.”

More than 20 million acres of public lands have wind power potential, and the U.S. Bureau of Land Management is hosting 39 wind farm projects that could power up to 1.5 million homes.

The authors of the EIA report could not be reached for comment, and an EIA spokesman did not return calls seeking comment about the report.