London − The financial and economic muscle of the global fossil fuel industry’s corporate behemoths will not protect them from the costly effects of negative stigmatization if they ignore climate change pressures, according to a new academic study.

The influence wielded on world stock markets by such corporations is enormous, with oil and gas companies alone making up about 20 percent of the value of the London financial index and about 11 percent of that in New York. 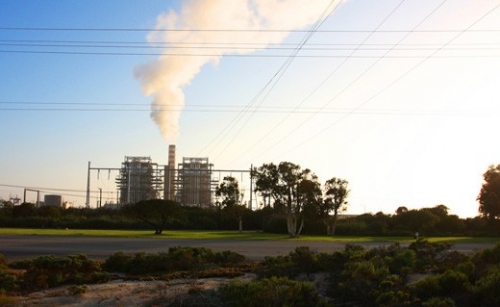 In the future, the fossil fuel industry could to face financial pressure from multiple sources and force it to address climate change sooner rather than later.
Credit: Rennett Stowe/flickr

However, if any meaningful action is to be taken on climate change in the years ahead, the activities of the fossil fuel industry will have to be severely curtailed and the bulk of assets frozen, inevitably leading to a sharp decrease in corporate valuations – what some analysts refer to as a bursting of the “carbon bubble.”

Not only are such corporations coming under increasing pressure from regulators and from climate legislation limiting CO2 emissions, but a high-profile campaign is also under way to persuade investors to withdraw from companies involved with the fossil fuel industry.

According to the new study by academics at the Smith School of Enterprise and the Environment at Oxford University, the fossil fuel companies cannot afford to ignore such campaigns. If they do, they will – at the very least – risk severe damage to their reputation, but they could also face increasing problems raising finance for their work.

The study, Stranded Assets and the Fossil Fuel Divestment Campaign, compares campaigns going on in the fossil fuel sector with other similar movements that have taken place − such as the campaign against corporations with investments in apartheid South Africa, and tussles with the tobacco, munitions and gaming industries.

The campaign against fossil fuel investments is spearheaded by the 350.org group, under the title Fossil Free. The Smith School study says the campaign draws heavily on the experience of targeting apartheid-era investments in South Africa.

Such campaigns move forward in distinct phases. At first, the aim is to create public awareness and publicity on the issue. Campaigners then target various institutions, particularly universities. Finally, the movement goes global, targeting big investors such as pension funds.

However, those anticipating a mass withdrawal of investment are likely to be disappointed, the study says. Experience shows that only a very small proportion of funds is actually withdrawn.

“For example, despite the huge interest in the media and a three-decade evolution, only about 80 organizations and funds have ever substantially divested from tobacco equity, and even fewer from tobacco debt,” the study says.

But such campaigns create publicity and can harm corporate reputations – resulting in what the study terms “stigmatization.”

It says: “As with individuals, a stigma can produce negative consequences for an organization. For example, firms heavily criticized in the media suffer from a bad image that scares away suppliers, sub-contractors, potential employees, and customers. 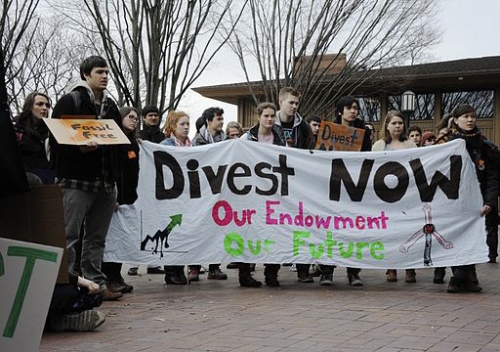 Tufts University students take part in a protest urging the university to divest its endowment from use of fossil fuels. The divestment movement is growing across college campuses and could put financial pressure on fossil fuel companies.
Credit: James Ennis, Wikimedia Commons via Climate News Network

“Governments and politicians prefer to engage with ‘clean’ firms to prevent adverse spill-overs that could taint their reputation or jeopardize their re-election. Shareholders can demand changes in management or the composition of the board of directors of stigmatized companies.”

This all has a knock-on effect. Companies associated with the fossil fuel sector might find themselves frozen out of public contracts, and banks might be reluctant to make loans. The study says the coal industry − more visibly polluting and less powerful than the oil and gas sector − is likely to feel the biggest initial impact of such a campaign.

“If during the stigmatization process, campaigners are able to create the expectation that the government might legislate to levy a carbon tax, which would have the effect of depressing demand, then they will materially increase the uncertainty surrounding the future cash flows of fossil fuel companies,” the study says.

The study has some advice for the fossil fuel industry. Rebranding is one option: BP tried this some years ago, with the change from British Petroleum to “Beyond Petroleum” and turning its logo into a green and yellow sunflower.

Companies would be ill-advised, says the report, to play tough with campaigners. “The outcomes of stigmatization will be more severe for companies seen to be engaged in willful negligence and ‘insincere’ rhetoric − saying one thing and doing another.