For the West, A Winter That Has Felt More Like Spring

From San Diego to Seattle, February has looked — and felt — a lot more like April. Flowers that normally wouldn’t start to bud until well into spring have already started to blossom and grow. Residents have been walking around in t-shirts and shorts, a rarity even for Southern California winters.

“Winter has seemed to have completely forgotten about us out here,” Kathie Dello, deputy director of the Oregon Climate Service at Oregon State University, said during a press teleconference last week.

Temp extremes have been remarkable this month across the US. 10-13° warmer than normal across much of the West! #cawx pic.twitter.com/YXbQ5Aq7xP

While the unseasonably warm weather is pleasant for now — certainly compared to repeated snowstorms and bitter cold in the East — it comes with an ominous tinge. The heat is doing nothing to help the severe entrenched drought, which has failed to improve during what is normally the region’s wet season.

A stubborn area of high pressure off the West Coast has kept the warmth in place and also prevented substantial precipitation from falling. What storms have been able to break through have dropped rain and not snow, which is needed to ensure a steady water supply into the summer dry season. And while the rains that did fall have helped replenish some reservoirs and moistened soils, they come with a downside, as vegetation that’s flourishing now could increase forest fire risks when it dries out after the wet season.

“California's really feeling the effect of these incredibly warm temperatures,” Daniel Swain, an atmospheric science PhD student at Stanford University, said in an email. That, combined with “very large multi-year precipitation” shortfalls is “resulting in the continuation of severe drought conditions,” he said.

Return of the Ridiculously Resilient Ridge

Record warm temperatures have been piling up across the West this year like snow in Boston. The town of Sandberg, Calif., outside Los Angeles, had nine straight days with highs above 70°F this month, besting the previous record of seven such days set last year. Salt Lake City had 43 straight days of above-average temperatures. Portions of western Oregon had a record warm January.

“It's certainly odd and disconcerting to see spring-like conditions for most of the winter thus far, and for much of the past few winters,” Swain said. “As superficially pleasant as this kind of weather is, it's not at all typical for this part of the world at this time of year.”

California, for the second year in a row, saw it’s warmest December-January, with a monthly average temperature 5.1°F higher than its 20th century average. With that heat having continued into February, it’s almost certain to be the warmest winter on record in California, surpassing the previous record set just last year.

“In the 121-year period of record, never have there been back-to-back Dec-Jan periods that were record warm for California, making this unprecedented in the state's history,” Jake Crouch, a NOAA climatologist, said in an email.

The period from Decemer 2014 to January 2015 was the warmest on record for California, surpassing the record set just last year.
Click image to enlarge. Credit: NOAA NCDC

The reason for the warmth out West is an area of high pressure off the coast that Swain dubbed the Ridiculously Resilient Ridge back in 2013 for its incredible persistence as a feature in the atmosphere — week after week, month after month.

What’s keeping the ridge around for so long is something scientists, including Swain, are actively looking into. So far, there are three main theories, Swain said: One is that it’s just random chance in a chaotic atmosphere, though Swain says the longer the ridge holds on, the less likely that is. Another is the idea that the amplified warming across the Arctic is lessening the temperature difference between pole and equator that fuels the jet stream, causing that river of air to meander more wildly and become stuck in certain patterns.

The most favored explanation for now, though, seems to be the extremely warm waters across the Pacific Ocean, particularly just off the West Coast, which can give rise to high pressure systems — and hold them in place. “At least part of the answer lies in the Pacific,” Swain said.

Understanding why the waters in the Pacific are so anomalously hot requires further research, but they’re expected to retain the additional warmth for some time.

Rain Instead of Snow

The ridge that is keeping the West warm is also keeping it dry, by blocking the storms that would normally bring rain and snow in the winter months, routing them further northward instead.

January is usually the wettest month of the year for San Francisco, but the city didn’t receive a single drop of recorded rain last month; that's never happened before.

Two storm events, one in December and one at the beginning of February, have brought some moisture to California and parts of Oregon and Washington. But snowpack is California’s main source of drinking water, and the tropical origins of the storms, called atmospheric rivers, meant that winter rain fell instead of snow.

Looks like August with lack of snow in @YosemiteNPS at 8,100 ft. Photo by Elizabeth Christie #CAWx #CADrought pic.twitter.com/XFDqVwr0rs

Because of that, the state’s snowpack is abysmal. The water year is currently “duking it out” with last year and 1976-1977 as the worst snowpack on record, Thomas Painter, a NASA researcher who heads a mission to monitor the snowpack, said.

There is more snow on the ground in Boston than at Crater Lake in Oregon, Dello said during the teleconference, and pictures from Yosemite National Park reveal little more than light dustings as high up as 8,000 feet.

“Snow is a giant pain for them, but we really need it here,” Dello said.

The rains that fell in December and earlier this month have helped plants bloom, as seen in NASA satellite images. While all that green may look like a good thing, those plants are using the water that is in the soil. If more rains and snows don’t come to keep the supply steady, the warmth and lack of water could cause those plants to dry up come spring, providing more fuel for forest fires, Svoboda said. 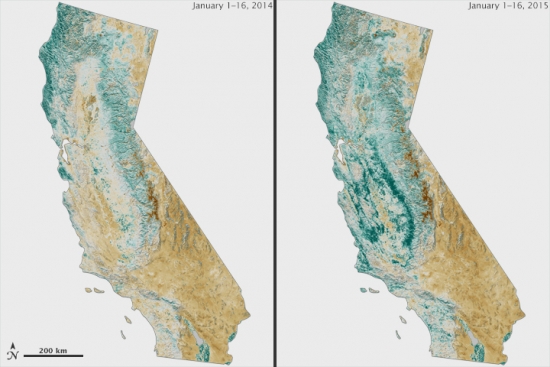 There are some storms bringing more rain and snow to California this week, and there is still a chance for more precipitation during the remainder of the wet season.

But the current NOAA outlook for March and spring as a whole suggests that warmer-than-normal temperatures are likely to continue, though there aren’t any clear signs on which way precipitation will go.

Dello likened the need for precipitation to being down by nine touchdowns in the 4th quarter of a football game. It’s not a score you’re likely to catch up to.

You May Also Like:
Obama’s Keystone XL Veto Not a Death Blow to Pipeline
Here’s Where Ocean Acidification Will Hit the U.S. Hardest
Three Tools to Solve The Mystery of Ocean Acidity
Carbon Pricing Pays the Way for Cleaner Energy