For First Time in 20 Years, Cold Records May Beat Warm

With a large chunk of the U.S. having endured one of the coldest Thanksgiving holidays in years and even more brutally cold weather in the forecast over the next few days, 2013 is poised to have daily record lows outnumber daily record highs for the first time in 20 years.

That’s a stark reversal from last year — the warmest year on record in the U.S. — when record daily highs dwarfed record lows by a staggering 4-to-1 ratio. It’s also a stark reminder of the vagaries of short-term natural variability set against the backdrop of long-term global warming. 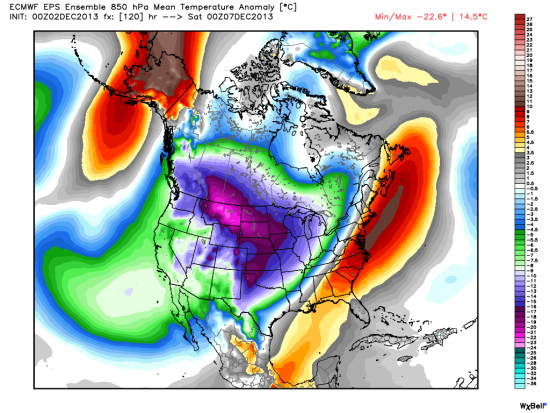 According to statistics from the National Climatic Data Center, the U.S. had 9,023 daily record high temperatures through Dec. 1, compared to 9,932 daily record lows. About 1,000 cold temperature records were set or tied during the last week alone.

That means that December will be a crucial month for determining if lows outpace highs for the year. The last time daily record lows outnumbered daily record highs in the U.S. was in 1993. The Arctic air mass moving south from Canada, which is set to send temperatures plunging from Seattle to Texas by the end of this week, tilts the odds in favor of cold temperature records prevailing.

Even with the cold snap in the U.S., the world has continued to see above-average temperatures overall, with 2013 expected to wind up among the top 10 warmest on record. The last month to have global average surface temperatures below the 20th century average occurred in February of 1985.

While that would run counter to the trend that has been observed during the past several decades, which is thought to be due in large part to manmade global warming, it’s not surprising. Much as the stock market has short-term fluctuations amid long-term trends, it is to be expected that in individual years, temperature records will buck the long-term trend. What is remarkable is that it’s taken this long for it to happen.

While 2013 is unusual in the context of the past two decades, periods of relatively cold weather — including Arctic outbreaks — are still to be expected in a warming world, studies show.

As the climate has warmed during the past several decades, there has been a growing imbalance between record daily high temperatures in the contiguous U.S. and record daily lows. A study published in 2009 found that rather than a 1-to-1 ratio — as would be expected if the climate were not warming — the ratio has been closer to 2-to-1 in favor of warm temperature records during the past decade (2000-2009). That finding cannot be explained by natural climate variability alone, the study found, and is instead consistent with global warming.

The study used computer models to project how the records ratios might shift in future decades as the amount of greenhouse gases in the air continues to increase. The results showed that the ratio of daily record highs to daily record lows in the lower 48 states could soar to 20-to-1 by mid-century, and 50-to-1 by 2100. 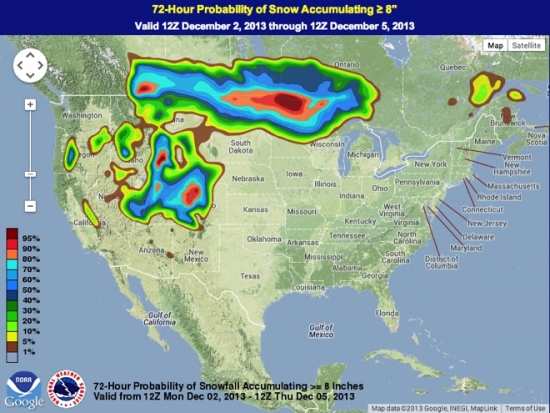 During the next two weeks, temperatures are projected to be 15 to 25°F below average throughout the Northwest, West, and Upper Midwest, according to multiple computer models as well as the latest climate outlooks from the National Oceanic and Atmospheric Administration.

During the early part of this week, the Arctic surge will be accompanied by strong winds and areas of heavy snow for the Cascades, Bitterroot and Teton Mountains, as well as parts of the Rockies, Wasatch, and Sierra Nevada mountain ranges. Some areas are likely to receive 12 to 18 inches of snow.

Eventually, heavy snow is forecast to spread into parts of the Northern Plains and Upper Mississippi Valley, as frigid temperatures take hold of about two-thirds of the lower 48 states.

Some of the coldest air will affect Montana, where low temperatures are expected to dip well below zero by the end of the week, with dangerous wind chills approaching 40°F below zero. The National Weather Service forecast office in Missoula described the coming chill as a “horrendously cold air mass” that will bring the coldest temperatures in at least 2 years.

The cold air will also affect major metro areas along the West Coast, from Seattle southward to San Francisco. In Seattle, snow flurries were possible Monday evening, and high temperatures may not get above freezing for much of the week. In California’s Central Valley, lows may drop to 20°F.

In Denver, which is more accustomed to wintry weather, snow and high winds are expected to accompany the bitter cold. The city is unlikely to set a record for the coldest high temperature for the month, which was minus-8°F, set in 1983, but daily temperature records could be threatened. Denver’s average high for December is 41.8°F.

Residents of Colorado’s Front Range are expecting an extended period in which temperatures do not rise above 15°F, after enduring a potentially damaging windstorm on Monday night into Tuesday morning as the Arctic air moves in. The National Weather Service said wind gusts of up to 75 mph, which qualifies as hurricane force wind gusts, are possible.

The large dip in the jet stream responsible for the cold air outbreak will initially allow milder-than-average conditions to envelop the East Coast, but there too, cold air will eventually win out, starting late in the week, according to the latest forecasts.

Extended forecasts for the rest of December show an increased likelihood of continued below-average temperatures across large portions of the Upper Midwest and Western U.S., which would help to further add to the imbalance between record cold and record warm temperatures. Even if warming occurs after mid-month, temperatures would have to hit record highs across a large swath of the U.S. to have any chance of catching up to cold temperatures’ lead.