Floods May Cost Coastal Cities $60 Billion a Year by 2050

A little bit of sea level rise could go a long way to increasing flood risk for the globe’s coastal cities. New research finds it’s possible to reduce that risk, but not make it disappear completely. It also finds that cities not typically thought of as hot spots for sea level rise and flooding will actually be some of the biggest losers in a soggier future.

Global sea levels have risen 8 inches over the past century. Some areas have experienced even greater amounts due to land subsiding due to natural and human causes. At the same time, populations along coasts have experienced major growth. In the U.S., an estimated 87 million people live along the coast, up from 47 million in 1960. Globally, six of the world’s 10 largest cities are on the coast. 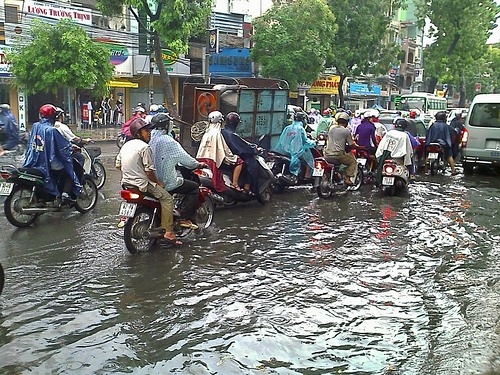 The confluence of these factors has caused major economic losses from flooding. Hurricane Sandy caused up to $70 billion in damages while Katrina caused $125 billion in losses, much of it due to rising water.

With these environmental and social trends set to continue and possibly accelerate over the next 40 years, losses due to flooding represents a key challenge for coastal cities to deal with. A Nature Climate Change study published Sunday found that costs could rise dramatically if nothing is done to account for rising seas and subsiding land. Assuming sea levels rise 15.75 inches above today’s heights by 2050 and subsidence from human development continues, the study found that losses from flooding in 136 of the world's coastal port cities could near $1 trillion annually by 2050.

The estimate of 15.75 inches is within the range of probable sea level rise scenarios according to a 2012 National Oceanic and Atmospheric Administration report.

However, if $1 trillion in annual losses sounds implausible, that’s because it basically is. “To get to $1 trillion, we have to basically have places which are destroyed every two years and are rebuilt again and again,” Stéphane Hallegatte, a senior economist at the World Bank and lead author of the study, said. “It’s not a realistic scenario; it just shows it’s impossible to have a scenario that we do nothing.”

Implementing an arsenal of adaptation measures could cut those costs to between $60 billion and $63 billion annually by 2050. In comparison, the study estimated annual average losses from coastal flooding to be $6 billion in 2005.

Adaptation would come at a financial cost. Hallegatte puts a price tag of $50 billion annually on helping the coastal port cities included in the study to maintain a “relative risk level.” That level assumes that as city economies grow, the ratio of flooding losses to gross domestic product stays constant with 2005 estimates. 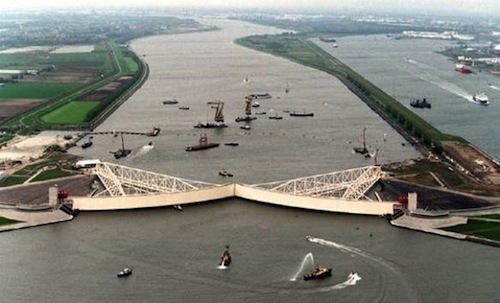 Rotterdam's Maeslantkering, a barrier that can open and close to protect the city's harbor from storm surges.
Credit: Lymantria/Wikimedia Commons

On the ground, that means cities would need to invest in a number of protective measures. Levees offer the main form of defense. However, they also lock in rainwater meaning pumping infrastructure would be needed to make sure cities don’t flood from the inside out. Movable storm barriers that help ensure harbors remain operational similar to Rotterdam’s Maeslantkering and flood monitoring and early warning systems would also on the shopping list of cities looking to adapt to rising seas.

All these efforts don’t completely mitigate the risk, though. “You can make floods rarer and rarer,” Hallegatte said, but even the best adaptation measures can’t ensure they’ll never occur again. This creates a paradox where floods are less likely but when they do occur, they wreak more havoc. That paradox poses a particularly big challenge for countries such as Haiti, which have coastal cities that are big players in a relatively small economy.

The costs aren’t the only factor to shift by 2050. Miami, New Orleans, and other cities typically thought of as at-risk to sea level rise will experience increased losses. However, the cities with the biggest percentage increase in losses are cities in regions rarely talked about when it comes to sea level rise.

Hallegatte points to the Mediterranean basin as one of those regions. “It’s a region with very little tide so the water level right now is very stable, which means all protection is is designed for a very precisely known water level,” he said. “If it changes a little, you’re completely out of the range you’ve planned for.”

Even in a more optimistic scenario that assumes only 7.9 inches of sea level rise by 2050, the study finds that cities such as Beirut, Istanbul, Athens, and Tel Aviv will see their average annual losses increase by more than 50 percent compared to 2005 even with appropriate adaptation measures. Another city in the basin, Alexandria, Egypt, will see losses increase by 154 percent, the highest in the world. Using the 15.75 inch sea level rise scenario, the increase is 192 percent. Cities in the Gulf of Mexico and East Asia also face similar concerns.

Planning for future flooding is certainly the domain of city planners and local government, but the issue ultimately extends beyond the coasts. “It’s also a challenge for insurers who will have to insure floods that are larger than today. It’s a challenge for countries because we’re talking about big cities and their hubs. All the countries rely on the activity in these cities. It’s really a national issue.”