Scientists may have zeroed in on the cause of a mysterious 18-month drop in global average sea level that occurred between 2010 and 2011, pointing to events that occurred on the world’s smallest continent: Australia. New research shows that during those two years, flooding rains in Australia, which resulted from a rare combination of factors, took huge quantities of water out of the oceans without returning it, like a library user with mounting late fees. 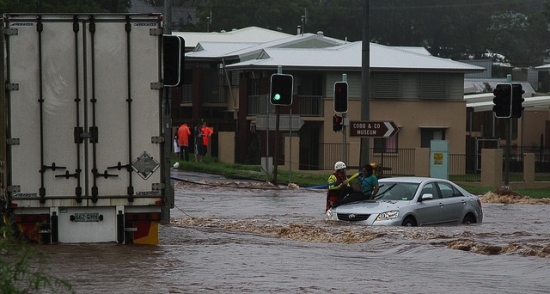 The study, which is to be published in a forthcoming issue of the journal Geophysical Research Letters, found that peculiarities in Australia’s soils and topography prevented much of the excess rainfall from ever making its way back into the oceans, instead soaking it like a sponge.

As the climate warms, the world’s oceans have steadily risen in recent decades, and the rate of rise has accelerated recently to about 3.2 millimeters per year, or about 1.25 inches per decade. That is because runoff from melting ice sheets and retreating glaciers is making its way into the oceans, and because water expands as it is heated.

However, for an 18-month period starting in 2010 and coinciding with a strong La Niña event in the tropical Pacific Ocean, the oceans dropped by about 7 millimeters, or about 0.3 inches, which caused some climate skeptics to question whether sea level rise had stopped altogether. Since 2011, however, sea level rise has resumed, and at a faster pace than before.

Following a historic drought, Australia was inundated with flooding rains during the 2010-2011 period, with devastating flooding occurring in Queensland, which is in northeastern Australia and contains the city of Brisbane. The study found that the rains resulted from an unusual confluence of three different natural climate cycles, as well as a contribution from global warming-related increases in sea surface temperatures, said coauthor John Fasullo of the National Center for Atmospheric Research, in an interview. 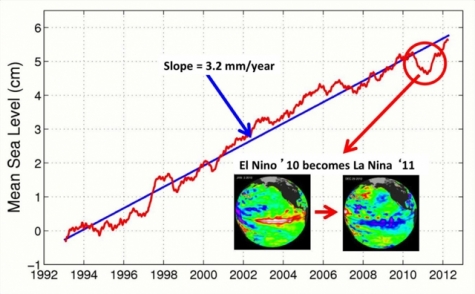 The dip in global average sea level between 2010-2011, based on satellite data.
Credit: NASA JPL.

“We didn’t know how much an effect Australia could have on the global oceans,” Fasullo said, noting that he was surprised to find that the continent “could contain such a large quantity of mass (of water) over a long period of time.”

The researchers used measurements of groundwater storage from NASA’s Gravity Recovery and Climate Experiment satellites, which allowed them to quantify small changes in land mass. They also examined data from an array of sophisticated buoys deployed throughout the Pacific Ocean, and satellite-based altimeters that keep track of global sea level changes.

Fasullo and his co-authors published research last year that tied the observed drop in sea level to the 2010-2011 La Niña, which cooled surface waters in the eastern Pacific while enhancing rainfall in Africa, South America, and Australia. But the researchers were puzzled by the fact that previous La Niñas were not accompanied by such a significant and prolonged dip in sea level, leading them to suspect that other factors were also involved.

The new study shows that it wasn’t just La Niña that caused the sea level rise slowdown, but other cyclical climate phenomena that together produced extraordinary rainfall amounts over the Australian continent. A pattern known as the Southern Annular Mode also helped direct moisture toward Australia, and even more moisture was added by a pattern known as the Indian Ocean Dipole, which is a system of ocean and air circulation throughout the equatorial Indian Ocean that influences rainfall patterns in Australia, among other areas. 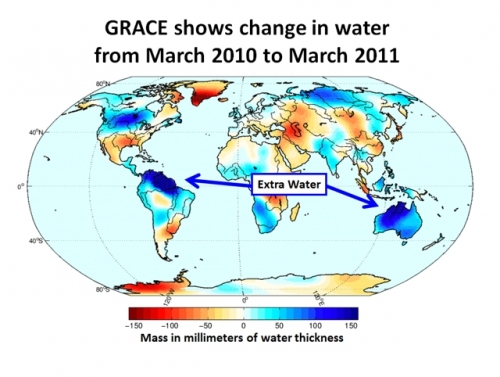 Image showing increase in land mass during 2010-2011 in Australia as well as parts of South America.
Credit: NASA JPL.

Fasullo said increased sea surface temperatures in parts of the Pacific Ocean, which are thought to be related to global warming, also boosted the amount of moisture that was directed toward Australia.

Thanks to this combination of factors, Australia endured one of its wettest periods on record, and the lack of river runoff from the continent’s interior meant that most of the rain collected on land and eventually seeped into the ground or evaporated, rather than returning to the ocean.

The rains led to the formation of vast inland seas, Fasullo said, including the Lake Eyre Basin in eastern Australia, which went from “a small lake to a body of water that you couldn’t see across.” The Lake Eyre Basin covers about one-sixth of Australia, and is equivalent in size to the state of Texas. It contains the largest ephemeral lake in the world, which expands dramatically during times of abundant rainfall and ceases to exist in more arid times.

“No other continent has this combination of atmospheric set-up and topography,” Fasullo said in a press release. “Only in Australia could the atmosphere carry such heavy tropical rains to such a large area, only to have those rains fail to make their way to the ocean.”

When viewed over the long-term, the rainfall-related dip in sea level looks more like a small blip amid a steady march toward higher sea levels, which spell serious trouble for coastal cities worldwide.

A forthcoming report from the U.N. Intergovernmental Panel on Climate Change is expected to conclude that the global average sea level may rise by an average of up to 2 feet by 2100, depending on future greenhouse gas emissions and how sensitive the climate system proves to be to those emissions.