All it took was a 1,000-year rainfall event to knock out — or at least significantly dampen — the drought that has been ravaging much of Colorado for at least a year and half.

The U.S. Drought Monitor, released Thursday, shows that nearly all of north-central Colorado is drought free, and the drought is greatly reduced in much of the rest of the state: 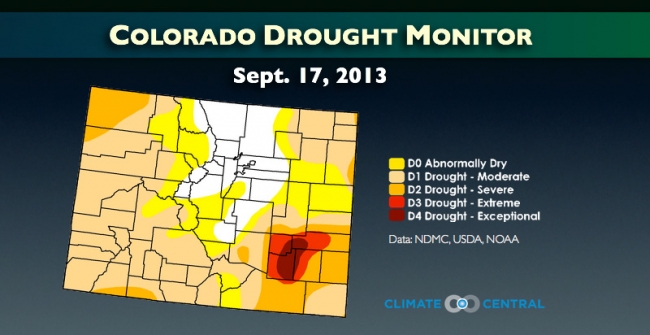 Many parts of the Colorado Front Range received most of their normal annual rainfall in just a couple of days last week, with up to 18 inches of rain falling on the eastern slope of the Rocky Mountains around Boulder and the adjacent plains. The rains produced catastrophic flooding, killing at least 9 and damaging or destroying thousands of homes and businesses, totalling an estimated $2 billion in property losses, according to Reuters.

This is what the drought monitor looked like just a week ago: 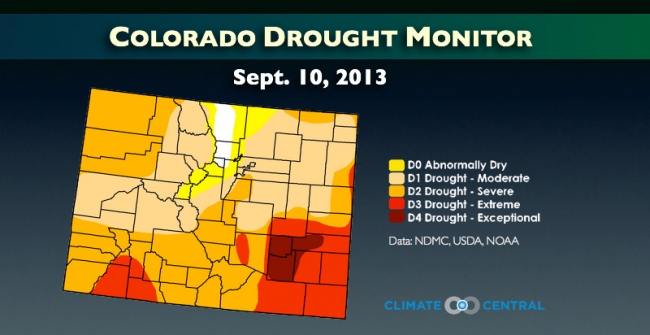 Colorado has been recovering from a drought that covered the entire state last Feburary, when the drought monitor looked like this: 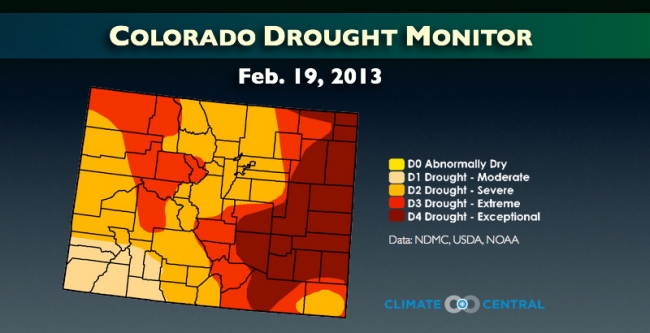 With a robust late-spring snowpack and adequate summer monsoon rainfall, drought conditions had already begun to subside in north-central Colorado's mountains before the floods that occurred over the last week. But the Front Range's deluge was a 1-2 punch for the drought.

“There’s a 2- to 3-category improvement in drought in those areas,” said Jake Crouch, a climate scientist at NOAA’s National Climatic Data Center. Drought is ranked by categories ranging from abnormally dry to exceptional by the U.S. Drought Monitor.

Exceptional drought still hangs on in a small part of southeast Colorado's Arkansas River Valley, where drought conditions have gripped the area since October 2010, and haven't fully subsided since.

But elsewhere around that one spot of exceptional dryness, Colorado's extraordinary rains may not have knocked out the drought, but they have been relieved somewhat.

The intensity of Southeast Colorado's drought declined dramatically: Moderate drought there fell by nearly a third in just the last week, according to the current drought monitor.

Editor's Note: This story has been updated to reflect the fact that this was approximately a 1-in-1,000 year rainfall event in some locations, not a “1,000 year flood” as originally indicated.